Passing down a language to children is a priceless gift, but it’s also an exhausting challenge for parents 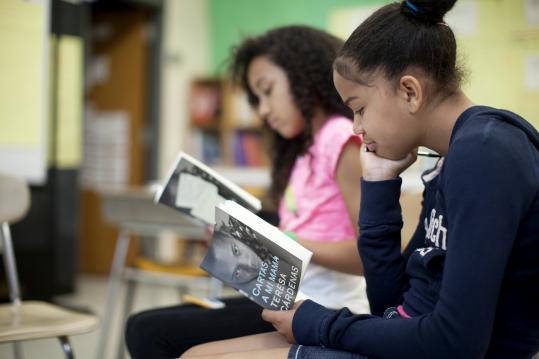 When my brother and I were kids, our parents would sit us down for some evening conversation with a little girl named Hélène. Hélène was French; she lived with her apron-skirted mother, tassel-shoed father, and a brother name Pierre. On our 12-record box set of language lessons, Hélène would do things like oversleep, causing her family to break into song: “Bonjour Hélène, bonjour Hélène/ C’est le matin, c’est le matin!’’

As the turntable played I thought, nobody ever sings when I oversleep. We were utterly bored with the record, but for our Haitian parents, who spoke French and Creole at home, Hélène had a vital importance. She was the girl who would make us a French-speaking family, and ensure their heritage did not die with them.

These days, I can occasionally be found correcting my own kids’ French pronunciation. “Not ‘bienven-OO,’ ‘bienven-UE!’ Close your lips like a fish!’’ But early on, I discovered what many parents already know: The passing down of language is a priceless, powerful tie to culture, but it is also exhausting.

If parenting is the hardest thing an adult will ever do, many parents in and around Boston are trying, succeeding, stumbling, and renewing their resolve to do something much harder still: to parent in two languages.

Technology and tot-lot meetups have made preserving language more possible than ever before, says Calvin Gidney, a Tufts University professor who specializes in childhood bilingualism. But ultimately, it still boils down to this: consistent, engaging, face-to-face interaction with family and peers. “To pull this off effectively, you have to find contexts for your kids where the child must - and that’s the key word, ‘must’ - use the heritage language,’’ says Gidney. That’s easier said than done, even for the most committed parents.

“We actually didn’t have any conversations about whether to raise our kids bilingual. It was just assumed,’’ says Carolina Gómez-Kramer, 34, a mother of two and grade-school Spanish teacher from Roslindale. “There are lots of benefits to being bilingual, but the main one for me is really family. Unfortunately as they get older, it gets harder.’’

Gómez-Kramer is from Colombia; her husband, David Kramer, is a native Californian. They both speak the two languages they want their kids to learn - Spanish and English - fluently, an advantage many intercultural couples don’t have. They are also frequent travelers and Skypers, scheduling weekly talks for 7-year-old Alana and 18-month-old Mateo with their grandparents on the computer. But Gómez-Kramer still wrestles with sustaining a peer group for her kids. In 2005, she turned a toddler play group she had started into a full-fledged education program, 1-2-3 Spanish Together, in Jamaica Plain. Some of the same friends who played with her daughter in Spanish back then play together at school now - only in English.

“When she was in bilingual day care and doing playgroups, it was easier,’’ Gómez-Kramer says. “Now, if she and her friends are all there, the moms speak Spanish, and they all answer in English. That’s the most difficult thing.’’

For Jean Chang, a systems analyst and mother of two in Newton, the assimilating pull of English on her daughters has been overwhelming. Chang, 41, isn’t giving up on passing Mandarin to Elyssa, 10, and Rebecca, 7. But she’s experienced firsthand what happens when cultural heritage collides with the parenting grind.

“My mom stayed at home, and if you didn’t speak in Chinese, she didn’t speak to you. And I’ve never really had the resolve to do that [with my kids],’’ says Chang. “The [girls] generally don’t speak it unless they’re compelled to, and they’re pretty annoyed if I try to talk to them in Chinese. ’’

Chang’s daughters have been in language school in Newton since they were toddlers, first at Huaxin and now at Newton Chinese Language School; they also have a Chinese tutor.

But Chang faces an obstacle not uncommon among second-generation parents: She and her husband are both Chinese-American, but only Chang speaks the language fluently.

Chang assumed bilingualism was a given for her own kids. “It wasn’t until we tried it in reality that my husband was, like, ‘Wow, this is a lot of work. I support you, but you can’t expect me to exert myself every time on this,’ ’’ she says. And Chang’s mother, who insisted on Chinese for her own kids, has also taken a different approach. “She says, ‘You know, I have so little time with them. I just want to make sure I’m understood, and the best way to do that is to speak English,’ ’’ Chang says. “And I understand that.’’

But finding the balance between nurturing and forcing is tricky, Gidney says. “It’s a huge challenge, because in parenting, reality trumps ideals,’’ he says. “Every time you want your kids to eat carrots, you can’t make it about eating carrots and speaking Spanish.’’

The need to pick your battles is a complicating factor. But increasingly, picking which language to hand down in the first place is also complicated. That’s the case for Lisette DaRosa, an opthalmic technician and mother of two who speaks Cape Verdean Creole. DaRosa’s partner speaks Haitian Creole, and their 7-year-old son, Giovanni, is learning both while taking French after school in Dorchester through a program offered by Boston’s French Library and Cultural Center.

“It’s part of Giovanni’s culture and part of him. I want him to be able to speak it,’’ says DaRosa, 30. But so far, she says, Giovanni identifies primarily as Haitian and is most fluent in English and French, followed by Haitian Creole and then Cape Verdean Creole. Because of that, DaRosa has been more proactive with their younger son, 16-month-old Cameron. “With Cameron, we’re more aggressive. And we use Cameron to motivate Giovanni, like, ‘You’re the big brother. Help us teach him.’ And he thinks that’s a big deal so he really responds to that.’’

For some parents, one option offers a much greater chance for success: language immersion schools, where all or most subjects are taught in a popular second language. The popularity of such schools is rising in the United States, studies show; the number of two-way immersion programs alone has risen from one in 1962 to more than 300 in 2010.

For Caroline Butler-Rahman, a mother of two in Cambridge, The Amigos School, where classes are taught in Spanish with English used for a few subjects, has been a godsend for her first- and third-grade daughters. The girls hear multiple languages at home: Bengali from their Bangladeshi father, and Spanish and Haitian Creole from their Haitian-American mother, who is biracial and was raised in Puerto Rico. Butler-Rahman says the plan seems to be working, for now: Even though English is the only language she and her husband share, their kids are strong Spanish speakers.

“Without the school as a way to become literate, there are so many languages and identities swirling around in our house,’’ says Butler-Rahman, 37, who also teaches at the school. “Having the dual immersion at Amigos really provides all that backing that we need.’’

At Amigos, Butler-Rahman says she has seen more third-generation families coming back to the mother tongue. “You see a lot of families where the grandparents speak Spanish, the parents understand but don’t speak it, and they want their kids to be fluent,’’ she says. “It’s a really potent thing when you lose language. It feels like this loss, this gulf, and somehow by giving it to your children, even if you’re more removed, you’re tying them back in.’’

Francie Latour writes about multiculturalism for the Boston.com blog The Hyphenated Life. She can be reached at franciewrites@gmail.com.