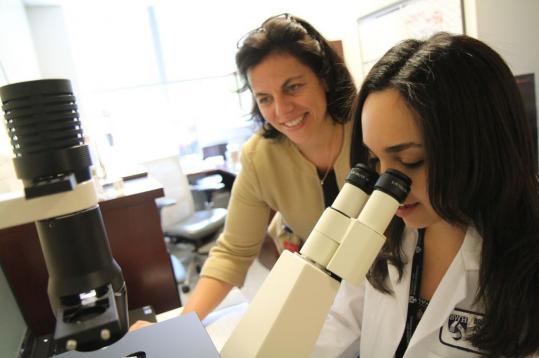 On Monday, 10 students will move into dorms at Harvard Medical School, where they will live during an eight-week fellowship that will have them working side by side with top researchers from Harvard and Brigham & Women’s Hospital.

The fellowship - called Summer Training in Academic Research and Scholarship, or STARS - is meant to foster minority students’ interest in a career in academic medicine, whether as research scientists, physicians, or another type of health care professional. Participants are undergraduates or first-year medical students of color who will work in labs, shadow program mentors, and attend seminars to polish their graduate school applications and interview skills.

Hospitals and universities around the country have similar programs, and the Brigham’s focuses on attracting students of black and Latino descent. Only 5 percent of the hospital’s faculty staff physicians, or 137 doctors, are under-represented minorities, while just 8 percent of its 182 physicians in training are minorities. Training more doctors and medical researchers of color is a priority for the Brigham, representatives say, because the hospital wants its staff to reflect - and be better able to engage with - the diverse community it serves.

Including this year’s class, 40 students have participated in STARS since it was started in 2009 by Barbara Bierer, director of the Center for Faculty Development and Diversity at the Brigham. Bierer says that growing up Jewish and working her way up in the medical world that “didn’t have very many women leaders’’ influenced her desire to help other minorities.

“It is important that students see a role model that has gone through some of the struggles that they are going through,’’ Bierer says.

Chinweike Ukomadu, director of the STARS program, says the weeks students spend working in medical labs are often a revelation for them and can alter their expectations of what they can achieve.

“A number of them do come with the impression that they couldn’t possibly be at Harvard. But when they come here, they see that there are actually people like us,’’ says Ukomadu, who grew up in Nigeria.

STARS alumna Isabel Fernandez worked with Eva Gombos, a Hungarian radiologist at the Brigham who studies breast cancer. The 22-year-old says her work with Gombos cemented her interest in medicine. A graduate of Emory University in Atlanta, Fernandez plans to take a year off before medical school to work in a research lab at her school.

“The connections you make, you keep,’’ Fernandez says. “That extra help means a lot, and it really changes a lot of things in your life.’’