THIS STORY HAS BEEN FORMATTED FOR EASY PRINTING
Careers

Why starting over is so hard

Your profession is dying. Your industry is shrinking. You know you have to do something – and soon. So what's stopping you?

I had only been working in my new career for less than a week when I felt like a failure.

My wife, Susan, had asked casually whether I would show her a copy of the syllabus I had already handed out to the 18 undergraduates taking my course in my new incarnation as a university professor. While I was a novice as a teacher, she was an expert who had studied in a master’s program in education and later won teaching awards and received high marks in her students’ course evaluations. And it took her only seconds of scanning my syllabus before she couldn’t suppress facial expressions of alarm. “Oh, dear,” she said, and “Whoa” and finally “Oy!”

I felt utterly deflated, and it took awhile before I could begin to understand why. After all, I knew – at an intellectual level, at least – that teaching was a new challenge and that I would make countless more mistakes before I gradually improved and ultimately strived for mastery. And I realized that I was lucky that my spouse could guide me through the trying process. But at age 45, after more than two decades of being successful in my old field, it felt awful to be inept at my new line of work.

That’s one of the many pitfalls – entirely predictable but painful and punishing – about trying to reinvent yourself in a new career. Even if you’ve studied the vast research on behavioral change – as I did when I was writing my book Change or Die – it’s still maddeningly difficult to go through major transitions in your own life. And career change is one of the hardest. Why is it so surprisingly vexing, and what can you do to make it easier? The best answers I’ve found come from three fields that study human behavior: psychology, cognitive science, and the current darling, neuroscience.

When I talked with one of the world’s leading neuroscientists, Dr. Michael Merzenich, professor emeritus at the University of California, San Francisco, he explained that practicing a craft or profession for a long time makes your brain change dramatically. If a doctor conducted a scan of the brain of a female flute player in a symphony orchestra, the image would show that the regions that control the fingers, tongue, and lips are unusually large. All of her years of training and practice have actually distorted her brain. Whatever your particular trade or occupation, your brain becomes specialized to do your job.

The good news is that your brain is capable of extraordinary change throughout middle age and well into your senior years. You’re capable of “rewiring” it with the complex learning you’ll need in a new career. Neuroscientists call this “neural plasticity.” But the catch is that unless you’ve stayed in the practice of learning hard things, then your “brain fitness” declines. The cognitive muscles you need for change have atrophied. It’s a use it or lose it situation. Unfortunately, few of us really use it. Merzenich told me that most people “haven’t ‘learned’ anything in twenty or thirty years.”

Can that really be true? After all, most of us put a lot of effort into keeping up with the latest developments in our professional fields. But that’s not what Merzenich is talking about. To him, “learning” isn’t maintaining your long-entrenched expertise; “learning” means becoming a true beginner in another challenging pursuit. You know that you’re learning something new and different if it’s really hard for a long time and you’re constantly making mistakes and feeling like an idiot. No one wants to feel that way, especially once they’ve become used to the headiness of being an expert in another area. Complex learning is undeniably difficult and discouraging. Think of the immense frustration of trying for the first time to drive stick shift, play golf, dance the tango, or speak a foreign language. That’s how you’ll feel if you switch careers. The way to make it manageable is to seek support from good coaches, teachers, and mentors who’ll help sustain your efforts, just as you would if you were learning Chinese or how to snowboard.

Changing careers also forces you to shift to an entirely new way of thinking – a new mind-set – and that’s equally challenging. When I realized that my longtime fields, magazine and book publishing, were facing upheaval and uncertainty, I tried blogging for an online publication, but I quickly realized that this new medium came with beliefs and values that contradicted nearly everything I had learned and practiced in my old career. I was trained to spend weeks, even months, carefully researching a topic and then to take great care about getting the facts precisely right and forming reasonable and nuanced opinions. But in the online world I was expected to spend only a couple of frantic hours writing up a highly polarized and contentious viewpoint about a topic that I had hardly any time to research – and if the facts were wrong, I might try to correct them later. Playing by these new rules just felt wrong to me at a gut level. Blogging was such a big switch that I gave up rather than persist in learning a new approach. Cognitive scientists would say that I was stuck in the “conceptual framework” of old media and that I couldn’t get my mind around the innovations of new media.

Even if you’re able to adopt a new mind-set, old friends and family members may not understand. While researching my book, I talked with Claudia Berman, who left a career as an opera singer in Italy to return to the United States and become a personal fitness trainer. Her opera friends, who didn’t believe in exercise, were befuddled by her move. I talked with Tim O’Mahoney, who gave up a career in corporate finance to become a carpenter and cabinetmaker. His switch sparked tension with his former peers and closest family members, who thought that he was taking a big step down, from white collar to blue collar, and that he was rejecting their values and way of life: His father had been a corporate vice president, and his siblings were lawyers, dentists, and executives. “Where I grew up, the service people who worked with their hands came in through the back door,” he told me. After he finally followed his passion, he went years without being in contact with his parents. But he felt more fulfilled and he thrived in his new trade, becoming such a master of fine woodworking that he taught classes.

In my own career switch I received lots of encouragement from family members. My father sent me ads for academic positions for a long time before I applied for any. It was easy for the people around me to realize that my old field was in turmoil and that I could thrive in a new one, but I stubbornly avoided thinking about it – for years. Psychologists call this an “ego defense mechanism,” though there’s a more popular movie-of-the-week term for it: denial. When we’re faced with a challenge that seems so overwhelming that we don’t think we can handle it, we typically protect ourselves from this unwanted news by putting it out of our minds. Even in today’s tough economy, when large numbers of jobs are being wiped out and entire industries are disappearing, it’s hard for many of us to break through that denial.

The idea of becoming a beginner again is rightfully scary, especially when it has been years or even decades since we’ve last done it. But it can be done. Our brains are built for change. We need to keep in practice, and then it will be easier to do the next time . . . and then the next.

A former writer for Fortune, Fast Company, and GQ, Alan Deutschman is now a professor at the Reynolds School of Journalism at the University of Nevada, Reno. E-mail comments to magazine@globe.com. 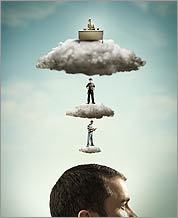