Midcareer change, with no regrets

Reinventing yourself presents obstacles, but the rewards can make a move worth it 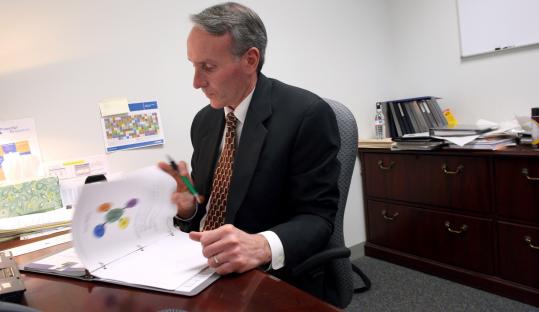 Paul Romano works in his office as a financial planner at the Principal Financial Group. “I love the idea that I am an entrepreneur. I love that it gives me flexibility to give back to society,’’ he says. (Bill Greene/Globe Staff)
By Jenifer B. McKim Globe Staff / May 16, 2010

Paul Romano worked at the same voice messaging company for 15 years, rising to vice president and earning a healthy six-figure salary. But at 46, with his company cutting staff and his job at risk, Romano faced a choice: find a similar job at another firm or re-create himself.

Romano chose change. The decision took him on a course of self-reflection, analysis, and career coaching that led to his current job as a self-employed financial planner. He has yet to make the kind of money he made as a technology executive, but there are other perks, including flexibility to do volunteer work, the pleasures of helping clients, and no bosses.

“I don’t regret making the decision,’’ said Romano, now 51, who lives in Arlington with his wife and stepdaughter. “I love the idea that I am an entrepreneur. I love that it gives me flexibility to give back to society.’’

Romano is one of a growing number of professionals who out of necessity or desire have changed careers in midlife. It can be a demanding process with unexpected obstacles, often taking longer than anticipated and requiring determination, family support, and savings. But for those who succeed, the rewards can be great.

Randi Bussin, a career coach who worked with Romano, said she’s seen a surge of midcareer professionals over the last few years — first those who lost jobs during the recession and now those who sense an improving job market and want to make a change. Bussin said she first asks clients what they hope to get from a new career — more time or more money are common answers — and then goes through a monthslong assessment to find alternatives.

“Career reinvention is not a simple proposition,’’ said Bussin, who eight years ago switched from high-tech to running her Belmont firm Aspire! “Everybody has different rewards and you have to get clear on what they are.’’

Romano headed directly into high-tech after his graduation from Niagara University in New York. In 1989, he went to work for a voice mail company that was later acquired by , an international telecom software company with offices in Wakefield.

Romano loved his work, but by 2002, with his company under new management and hurt by the Internet bust, he could see that his job was at risk. To make himself more marketable, he completed an 18-month MBA degree at Boston University. In 2005, he talked with his manager about his future and learned there weren’t opportunities for advancement. He took a buyout and walked out the door.

Romano calls 2005 “the year of change.’’ In addition to leaving his job, Romano became engaged to his second wife, Tracy Magram, and began renovating their Arlington home. He worked on the house, planned their wedding, and thought about his future. Then, while meeting with a financial adviser, it struck him that financial planning would meet his passions of helping people and working in finance.

He hired Bussin, the career coach, took personality assessments, discussed his passions, and talked to financial planners and other professionals.

After considering a return to technology, Romano settled on financial planning. Over the next three months, he studied and passed exams to sell life insurance and mutual funds. He applied for jobs, eventually landing with , a Minneapolis company that contracts with financial planners who create their own client bases. Three years later, he affiliated with , an Iowa firm with offices in Waltham, where he works as an independent contractor.

Romano is energized by the clients he helps, and the flexibility to join the local Rotary Club and volunteer for environmental groups. He’s even training for a triathlon. “You have self-doubts,’’ Romano said. “You have some terrific days and other days you say this is challenging and this is tough.’’

But, he added, “I have no doubt I will achieve my goals.’’

Burnt out at your job? Is the future dim? Are you seeking more passion at work or more time with family? Whatever the reasons, changing in midcareer is a huge step. Belmont career coach Randi Bussin provides some advice.

I want change, how do I start?

Many people change careers because they dislike the job, boss, or industry. Make lists of what you dislike and enjoy about your job, then compare them side by side.

I’m good at what I do, but still want out. Is that normal?

Some people have skills they no longer want to use. Think about interests and passions: Do you enjoy working with people or data? Are there areas where your friends and family see you as an expert? What are the rewards you seek: More money or more time?

I’ve been in the same industry for 20 years. How do I discover new careers?

Recruit a few brainstorming partners to think about career options. Tell them about your likes, dislikes, and passions and ask for their opinions. Once you come up with possible careers, sit down with a trusted friend to narrow the list. Then research the occupations and industries. Consider what new training may be required, how you might get it, and whether you can afford it.

I’ve picked a job that would suit me. How do I get a foot in?

There are several ways to get real-work experience, including volunteering, part-time work, or a job transfer. Another way involves formal education or training. Rework your resume, too. You need to rebrand yourself. Lastly, start networking through professional organizations and seek mentors.

Changes for the ages