Downsized, but still in the game

For surivivors of a layoff, keeping up morale is crucial 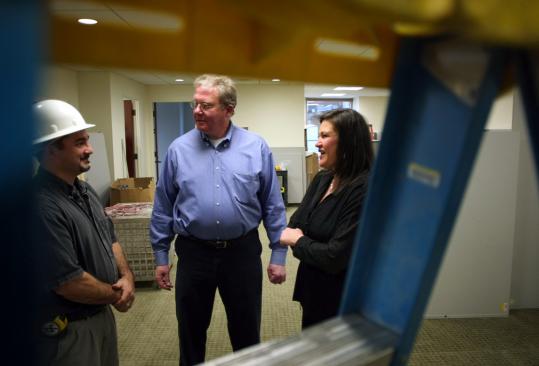 Lori Stewart Coletti (right), director of client services for Elaine Construction Co., says uncertainty about the economy is taking a toll: ''The general feeling is, 'Could I be next?''' (John Tlumacki/Globe Staff)
By Maggie Jackson January 11, 2009
Text size – +

Layoffs at Elaine Construction Co. have been minimal, and there's work in the pipeline, but the firm's leaders aren't sitting tight.

After two field supervisors were let go from the staff of 50 last fall, top executives began more frequent visits to site employees who often don't see corporate folks for months. And Monday staff meetings at headquarters have changed. Now, everybody must report on project leads, rather than waiting for marketing to fill them in on new business. The aim: keep afloat and keep up "survivors' " morale.

"The general feeling is, 'Could I be next?' That's the level of uncertainty that you really have to combat," says Lori Stewart Coletti, director of client services at the Newton-based firm, which specializes in commercial and institutional renovations. Especially at a small business where everyone knows departing staff, says Coletti, layoffs are "traumatic" - fraught with guilt, lack of focus, and added work pressures.

Under such conditions, workplaces - big and small - often turn toxic, a growing body of research shows. "It shows up in a lot of bad behavior - hunkering down, hoarding information, every person for themselves, behaviors that are exactly the opposite of what companies want," says Laird Post, head of the US human capital management practice at the consulting firm Booz & Co.

For survivors of a layoff, the anger and grief they feel may lower productivity - making them candidates for the next round of pink slips. For managers, downsizings often lead to unhappy staff - who take the first chance they get to leave. A study published last spring found that companies that lay off as little as half a percent of staff experience a 13 percent turnover rate for at least the following year. That's 2.6 percent higher than average turnover at firms without layoffs.

"Downsizing is a shock to the system, and it leads employees to take a much closer look at what they have and what they may find elsewhere," says Charlie Trevor, the University of Wisconsin-Madison associate professor who led the study. Employees afraid to quit in this extremely tight labor market may jump ship later.

What to do? The good news is that workers and managers alike can take steps to quash survivor syndrome before it derails individual career paths and corporate bottom lines.

Start by staying focused on work, not the latest layoff gossip, says Mike, a Boston-area human resources executive with plentiful experience in corporate downsizings in various industries. This is a tall order, he admits. "You find yourself becoming all consumed by the process," says Mike, who did not want to use his last name due to the sensitivity of the topic. "You lose focus on your life, your family, and your work."

To get on with business, Mike meets with staff individually and asks about their most important priority. "That's what gets lost or diverted, those higher aspirations," he says. Such meetings rejuvenate communications and help switch everyone's focus back to work. If your manager is too distracted to keep an eye on you, then be your own coach and revisit your work goals, short- and long-term.

Staying upbeat is crucial, too, for both employees and managers. At Elaine, executives have consciously tried to stay realistically optimistic, in part by stressing the positive during Monday staff meetings. "The way people behave in an uncertain time is pretty telling," says Coletti. "If your leadership team is complaining and moaning, that sets a tone."

Employees need to follow suit. Their jobs may depend on it, says Janet Banks, a Boston-based consultant who wrote about recession-proofing careers in the September Harvard Business Review. Imagine being on a life raft, "what kind of person would you want sitting beside you?" asks Banks. "If I'm your boss and you're in this pool of grief and anger and fear, I don't want you around me. You pull me down."

Staying on higher ground is an often-forgotten tool for troubled times, no matter whether you're chief executive or junior janitor. For employers, that means treating departing and surviving staff with fairness and dignity. "We have found enormous benefits when managers manage a downsizing process and the aftermath fairly," says Batia Wiesenfeld, a New York University associate business school professor who has studied the art and science of downsizings for 20 years.

When survivors of a downsizing felt employees were being treated fairly, they had higher commitment to the firm and lower absenteeism in the six months to a year after the layoffs, a series of 2007 studies by Wiesenfeld has shown.

Employees in turn can protect their jobs by showing flexibility and even humility, says Banks. Be willing to let go of your favorite project if it doesn't fit into a new cost-cutting effort. Take on added responsibilities - without a raise or promotion. Show that you're willing to help pull the company through the doldrums.

Finally, stay alert to your "plan B," advises Bob Kustka, a Norwell-based human resources consultant. Polish your resume and nurture a wide network of contacts. Keep thinking, "what do I need to do next, what courses do I need to take, what experience do I need," says Kustka.

But don't forget to take care of yourself, adds Janet Banks. During times of economic uncertainty, you have three jobs: making yourself relevant at work, staying on top of career opportunities, and managing your own well-being and life outside of work, says Banks. "The inability to predict what's going to happen next is very jarring to most people. Few can tolerate it for very long," she notes. "Preserving energy for the marathon, not the sprint, is important."