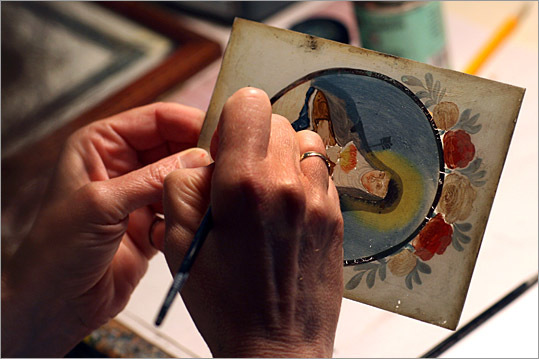 Linda Abram's studio looks like a typical artist's workplace, cluttered with pots of paint, swatches of color, scattered sketches, and countless brushes. But there are pieces of glass everywhere - carefully preserved shards, sheets of old glass, glass filed away in cubbyholes. This is the Waltham hideaway of Abrams, a reverse glass painter.

It's a craft so obscure that Abrams says she is "kind of a dinosaur," one of the few professional artisans in New England who restore reverse glass paintings, a centuries-old art form featured on mirrors, clocks, and furniture.

Well-executed reverse-glass paintings hide their complexity: the artwork is painted on the back of the glass itself, and then flipped over and viewed from the front. This means that details are painted in the opposite order that they usually would be on a regular canvas, starting with the foreground and working "backwards." This makes correcting mistakes almost impossible. For example, the teeth in a mouth would be applied first, then the mouth, and finally, the flesh tones.

"There aren't that many people in the world who still do this type of painting," says Abrams, who started her career in 1975. "It's a quirky profession."

How did you become a reverse glass painter?

After I graduated from Mass. Art [Massachusetts College of Art and Design], I had no clue what I wanted to do. My dentist, who collected clocks, asked me if I knew how to do reverse glass painting. I said yes, even though I had no idea what he was talking about. I went and looked at some clocks at a museum that had reverse glass paintings and tried to figure it out.

Reverse glass painting doesn't seem like an easy thing to master. I started by copying originals from 200 years ago. It was trial and error at first, painting in reverse. My lines were too heavy or the colors were not handled with finesse. I had to simplify and learn restraint to make things look lively and original.

And the glass, it must be tough to work with, because it's so fragile.
Once, early in my career, I had a reverse glass painting on a chair, and without thinking, I sat right down on it, and it broke. It only happened once, though, and never since.

So when a picture is broken, you have to piece it back together?

I have gotten paintings that are in a million pieces. When that happens, I put them together like a jigsaw puzzle. Because of that, now, when I'm not working, I can't do jigsaw puzzles for fun anymore. After all, when I'm working, I get paid to put puzzles together.

What sort of scenes or pictures do you work on?

Portraits of ladies and ship captains, mythological scenes, naval battles, and pastoral scenes. I especially have a lot of fun with primitive reverse glass paintings, which are kind of goofy. Primitive paintings were country cousins to the high style - most of this work was done for fancy furniture and people with money.

What's the oddest object that you've ever done reverse painting on?

I once did a reverse-painted bladder. It was an early 19th century translucent Chinese lantern made out of a bladder, and it was reverse-painted with a landscape scene on it. I'm not sure what animal it was from, maybe a cow, because it was pretty big.

How does it feel to walk into a museum and see something you've worked on?

How much can a reverse glass painter make?
Between $40,000 to $60,000 a year, but there are no benefits. Although, you get a lot of personal satisfaction and you're helping to preserve beautiful old objects.

You're also a gilder, which means that you overlay thin sheets of gold onto picture frames or into the background of a reverse glass painting. What's the most common misconception that people have about working with gold?
That it's the value of gold that makes the gold so expensive, but you're actually paying more for the labor involved in making something look like solid gold. A book of 20 sheets of gold is only $45, or less if you buy in quantities.

And what about the $175 dollar hamburger made of Kobe beef, topped with gold flakes, that's served by a Wall Street restaurant. Is that worth it?
Rip-off! I gild food all the time, and as a side note, once I even gilded my eyelids for a party. If I'm making something special, I put gold on it. I have a chocolate cake recipe that calls for gold on top, or a chicken recipe that includes gold garnishes. Gold is edible, and it's so thin, it's negligible. There are no calories.

But I bet you don't eat glass.
Never.