They are engineers and medical doctors, professors and entrepreneurs, venture capitalists and CEO's. Indian Americans (or Asian Indians, as they are often called) are an incredible success story in the U.S., and their impact on the social, economic, and cultural life of greater Boston has been significant.

According to the latest (2005) U.S. Census figures, Asian Indians numbered 55,840 in Massachusetts, with most of them living in the Metro Boston area. As director of the Institute for Asian American Studies at the University of Massachusetts-Boston, Paul Watanabe knows this community intimately. He calls their story "remarkable" and their growth "stunning." Asian Indians started arriving in the Boston area in significant numbers in the 1960s, many to further their educations at MIT, Harvard, and other colleges and universities. 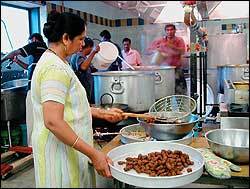 Ravi Sakhuja was one of the early arrivals. A graduate of the Indian Institute of Technology at Kanpur, he pursued a Ph.D. in energy conservation at MIT. He went on to become the founder and CEO of Tecogen, a Waltham company producing high-efficiency energy systems. "When I came in 1967, there was one Indian restaurant in Boston and the majority of Indians were students. We used to rent a hall at MIT and watch Indian movies together," Sakhuja recalls. "Now I am the first Indian American in the state to have been elected to a school committee [in Lexington], in part because of the support of our community who pulled together behind a candidate of our own."

A focus on higher education has come to characterize the Asian Indian community; Watanabe's research shows that almost 50 percent of Indian Americans have graduate or professional degrees, which, in turn, translate into high income levels. In 2000, Indians had a median household income of $72,000, far higher than any other ethnic group.

Impressive as these figures are, they tend to mask the fact that 19 percent of Asian Indians (excluding students) are considered low-income. Many of them work in the customer service field, according to Watanabe's research. "These are entry-level positions, usually low-paying and not requiring many skills. Asian Indians do have one advantage over other low-income immigrant groups, their grasp of English," he says. 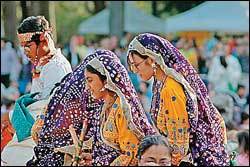 The exceptional growth rate of the Indian American community in the state (129 percent from 1990 to 2000) has led to a high degree of organization. Gone are the days when the small group of Indian immigrants banded together. "Now Indian Americans are organized according to language, religion, and regions they come from," explains Meera Rajagopalan, editor of India New England, a journal based in Waltham. "The Indian-American community has come to reflect the diversity of the Indian population back home. It is inevitable, but maybe something gets lost in the process," she adds somewhat wistfully. Many of the Indian-American organizations are devoted to keeping their culture alive in America, including celebrations of harvest festivals and Diwali, the Hindu festival of lights. The celebration of India's independence is one event that does draw from a cross section of the community. More than 10,000 Indian Americans converge in August at the Hatch Shell in Boston for India Day.

The American-born Indian-American generation is having its own impact as it reaches adulthood. "Often they identify as South Asian and not as Indian," says Ravi Sakhuja. "They are aligning themselves with the American-born children of immigrants from Sri Lanka, Bangladesh, and Pakistan. Imagine that. Native Pakistanis and Indians have no dealings with each other, but here their American offspring are friends." 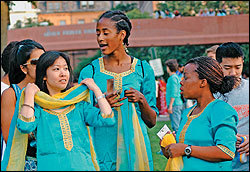 As second generation Indian Americans have claimed their place in the mainstream, they have become more socially and politically involved. Paul Watanabe dates this to the aftermath of 9/11. "There has been a serious degree of introspection in the Indian-American community. The idea that hard work, a good education, substantial income would lead to automatic acceptance was shaken when South Asians were suddenly viewed with suspicion and some, Sikhs in particular, became targets of discrimination." Wanatabe says this has had "a sobering effect" on a community that felt that assimilation would be smooth.

Ravi Sakhuja, the newly elected Lexington school committee member, believes the realization that Asian Indians are not immune to discrimination has fueled political awareness. "I call it the number one political issue for our people," he says. He is a strong believer in political participation, having founded the Indian American Forum for Political Education in 1982. Getting the community involved in the political process has taken time. "Grass grows very slowly," he laughs. But he has high hopes for the American born generation. "I see it in my own children. They are hugely interested in policy and the way you affect change in policy is through politics."

Sakhuja believes that Asian Indians have "a lot to add to the American dialogue. We come ourselves from a very diverse society. We also place a premium on education and want to make sure that children in America receive a quality education." And for him personally, he is grateful for the opportunity to give something back "to the country that has been great to me."