THIS STORY HAS BEEN FORMATTED FOR EASY PRINTING
SAUCE

Memories of Burger King linger, but Rendezvous is a revelation 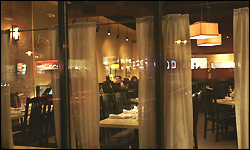 CAMBRIDGE -- Maybe it's because we were sitting at the large picture window in this former Burger King, occasionally glancing out onto the freak show that is Central Square, but we kept expecting that creepy king from the TV commercials to pop up. Staring at us with that blank smile on his oversize plastic face, he might have tried to hand us a Double Croissan'wich or a milk shake, and we just weren't interested.

Thankfully, no royal kitsch remains at the new Rendezvous in Central Square, where chef-owner Steve Johnson has tried to exorcise the fast-food ghosts from the building. Sure, they painted the place a BK yellow and red, and you may recognize the chilly feel of the glass-atrium side of the room, but those are the only nods to the past we could spot. The full name (including "in Central Square") may be awkward; the low-key energy, soothing lighting, and accessible, vibrant food are anything but.

We dropped in on a Monday night during Thanksgiving week, passing a guy getting cuffed and collared as we made our way to the yellow awning just down the street from the Middle East. Word hadn't gotten out about the restaurant, so we expected to have much of it to ourselves. We didn't expect our cover to be blown the moment we walked in. Paula Spina, former owner of the now-closed Claremont Cafe, has been waiting tables here, and she immediately rushed over to (loudly) say hello. All we could do was chat, smile, and hope that we'd get treated like any other customer.

Only Johnson & Co. knows if we did. Our waitress had just a few other tables to worry about, so everybody in the place was getting plenty of attention. But she did seem on edge when she came our way, saying "beautiful" a few dozen times too many.

As for Johnson, he's been running plates during the opening period, apparently because he wants to schmooze instead of hide in the kitchen. When he brought dishes to our table, though, he kept mum, perhaps wanting to resist appearing to curry favor with the Sauciers.

Which is just as it should be, because his food speaks for itself. A salad of paper-thin celery root with apples was so addictive that even the one among us who shudders at the thought of goat cheese didn't mind it. Phyllo-wrapped squab seemed minimal for $12, especially since the quince, raisins, and pistachios overpowered any flavor of the bird. But our forks clanged in battle over a dish of pillowy gnocchi with luscious braised oxtail.

Friends who live nearby had told us that Johnson's food -- and the place in general -- struck them as lackluster, hewing too closely to the middle ground of upscale comfort food without any sparkle. And it's true that we were disappointed in the nondescript wines-by-the-glass list and a roast chicken that was tender and juicy but otherwise more simplistic than simple. Roast cod with apples and squash, though, had such a crispy-on-the-outside, creamy-on-the-inside-thing going on that we all angled for a chance at the plate, especially once we swiped some of the cod through the tangy cider-spiked butter sauce. That went double for the double pork chop.

At dessert time, the mango sorbet was tart, but we need more than that to keep us interested in what's become as much of a dessert cliche as molten chocolate cake. Nothing beats a well-made pastry, though, and the apple crostada was all flaky, buttery goodness. Ultimately, it was the toasted almond panna cotta that captivated us. As we scooped up the softly gelled cream along with cranberry relish and candied kumquats, we were as happy as kids slurping down a Burger King shake. Maybe even happier.