Exploring the science behind traffic lights 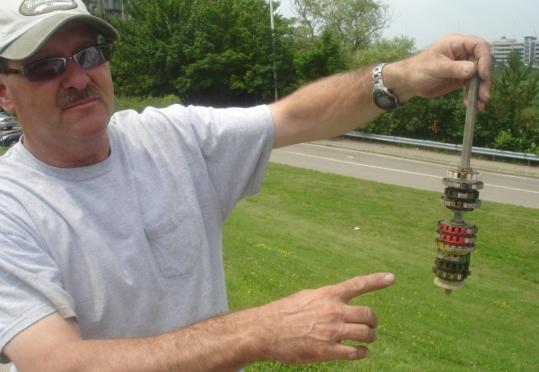 Traffic-light controls have evolved a long way from the vintage, gear-driven red-yellow-green system displayed by Bobby DeCristofaro, who maintains Quincy’s intersection signals. (Photos By Peter Demarco for The Boston Globe)
By Peter DeMarco May 9, 2010

Jack Gillon couldn’t wait to show me his handiwork. The intersection of Granite and Hancock streets in downtown Quincy was our starting line; the Department of Public Works on Sea Street nearly a mile away was the finish.

“So, we’re going to get back to your office from here hitting all green lights?’’ I asked, dubiously.

For more than an hour, Gillon, Quincy’s traffic engineer, had gushed about the glories of modern traffic lights. Thanks to semiactuated intersections, dilemma zones, loop-detector amplifiers and the like, traffic can be zipped through a city like never before, he said.

But to truly appreciate the science of traffic platooning — synchronizing long stretches of traffic lights to work in unison — we had to take a drive.

When our light turned go, I began to count. One green light. Two green lights. At the third intersection, we barely squeaked past the yellow. “I knew that was coming,’’ Gillon said, unfazed.

We slowed for someone in a crosswalk, which I was sure would kill our chances. Not so: four green lights. Then five!

A jaywalker on the next block did do us in, however, so the count ended there. But I still was impressed.

The basics
Gillon has been in the traffic-light business since 1971, having also programmed systems in Boston, Brookline, and Quincy. In the old days, moving gears, sort of like those in a clock, clicked traffic lights on and off, he said. Nowadays, the vast majority of intersections have computer-driven controls, allowing flexibility in terms of how long a green or red light is displayed.

Most modern traffic signals don’t operate blindly; they actually respond to the number of cars entering the intersection from various directions. There are several ways traffic lights can “see’’ cars: radio waves or microwaves can be bounced to detect moving objects; cameras can perceive changes; cars can pass over pressure-sensitive plates. But often, traffic lights know how many cars are in an intersection thanks to sensors placed strategically under the pavement.

It works this way: Picture the first car in line at a red light. About an inch underneath the pavement where the car’s idling, an electrically charged wire has been spread in a 6-by-6-foot loop to form a magnetic field. Whenever a car passes over the loop, it disrupts the field.

A record of every disruption is sent to a control box, a metal cabinet about 4 feet tall positioned nearby. You may have never noticed the boxes, but Gillon assured me they exist at just about every signaled intersection around here. A tiny computer inside the control box analyzes the disruptions. If they keep happening, it means that cars are still entering the intersection from that direction, so the light should stay green. If the disruptions stop, it means there are no more cars and the light should switch to red.

A traffic light can’t stay green forever, so there’s usually a maximum number of seconds allowed before the computer switches the light to red. On a main street, it might be 30 or 40 seconds, Gillon said. But with no vehicles coming, the light might switch to red in half that time.

Total control
Just about every Quincy control box is wired to a computer in Gillon’s office, either directly or through a regional master box, so he can see what’s going on at intersections all over the city. If a sensor records a long disruption, it probably means a car is waiting to turn left, so the light should stay green a few seconds longer than it does for cars coming from the opposite direction to allow the driver to make the turn.

With such technology, he’s able to synchronize traffic signals at one intersection with those farther down the street, allowing a whole string of cars — a platoon — to move as a group from green light to green light.

“When I was in Brookline I had cars going in to Boston in the morning and cars coming out of Boston in the evening. The system detectors showed which platooning program I should play: an outbound or an inbound one,’’ he said. It could also change on the fly: after a Sunday afternoon game, the system would automatically adjust to allow more cars to pour out of Fenway, Gillon said.

Big benefits
Not every community’s traffic lights operate as well as Quincy’s. Some communities lack the technology, even though the city’s is more than 20 years old. Others lack the personnel. But for those that prioritize traffic signal management, the benefits are numerous, Gillon said.

By platooning groups of cars, fewer vehicles get stopped at red lights, reducing idling emissions by as much as 20 percent, Gillon said. Extending green lights to allow 18-wheelers to pass through intersections — which Quincy does by use of surveillance cameras — likewise helps the environment.

In the future, Gillon hopes to adjust his system to hold green lights for MBTA buses that are running behind schedule.

Best of all, with efficient traffic lights, everyone can get where they’re going faster.

“You’ve probably got 35,000 or 45,000 cars coming through here a day,’’ said Gillon, stopped at an intersection near the end of our journey. “If you’re saving even six seconds for all of them, that’s a lot, right?’’

Peter DeMarco can be reached at demarco@globe.com. He also updates a Facebook page, “WhotaughtYOUtodrive?’’