Toyota to conduct safety tests on all SUV models 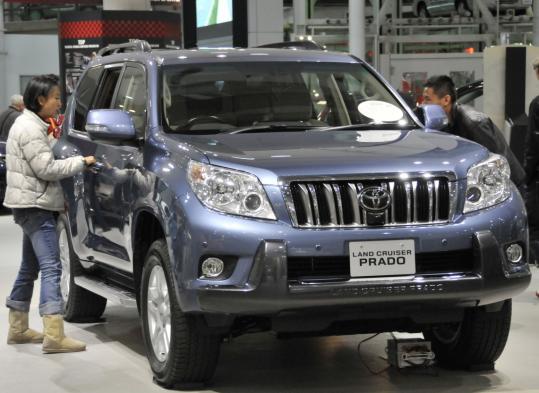 Toyota will test the stability control of all its SUV models and aims to replicate the Consumer Reports’ test that first uncovered the rollover susceptibilty problem. (Yoshikazu Tsuno/AFP/Getty Images)
By Yuri Kageyama and Dan Strumpf Associated Press / April 16, 2010

TOKYO — is testing all its sport utility vehicles to reassure buyers of their safety after Consumer Reports warned a large Lexus SUV is susceptible to rolling over.

The testing covers the entire lineup of Toyota and Lexus SUVs, including popular models such as the RAV4, the 4Runner, and the Highlander, said Toyota spokesman Brian Lyons. The automaker will be testing the vehicles’ stability control and aims to replicate the Consumer Reports’ test that first uncovered the problem, he said. He was unaware how long the tests would take.

Toyota is also suspending production of the Lexus SUV — the GX 460 — which is built in Tahara, Japan, for 12 days starting today. The move follows suspension of the vehicle’s sales earlier this week.

Toyota has yet to decide whether it will recall the vehicle, a hefty seven-seat SUV sold mainly in North America but also in the Middle East, Russia, and some other nations.

The actions reflect a new urgency at Toyota Motor Corp. to deal with safety problems. In recent months, the automaker has been plagued by recalls and accusations that it responded too slowly to safety lapses.

Earlier this week, Consumer Reports gave the GX 460 a rare “Don’t Buy’’ rating because its rear slid out too far during sharp turns designed to test the vehicle’s handling. That puts the back end at risk of hitting a curb and rolling over.

Toyota says it does not know what is causing the problem but was working to address it so that the influential magazine, which many shoppers rely on to choose new cars, would retest the vehicle and give it a satisfactory rating.

“I do think Toyota is responding very quickly,’’ said Rebecca Lindland, automotive analyst at consulting firm IHS-Global Insight. “I think the difference is that this situation has been made very public.’’

A small-volume SUV that launched in late December, Toyota has sold just 4,787 GX 460s in the United States this year. That represents about 10 percent of sales for Lexus and just 1 percent Toyota’s overall US sales.

Still, Toyota ordered dealers to stop selling the model in North America Tuesday within hours of the Consumer Reports warning. Yesterday, Toyota said it would expand the sales halt to all markets. The model is not sold in Japan.

The problem with the GX 460 arose during a standard test on a Consumer Reports’ track. In the test, the driver approaches a sharp turn unusually fast, then releases the accelerator pedal to evaluate the vehicle’s response.

The maneuver mimics what an alarmed driver might do after exiting a highway ramp too fast, Consumer Reports says. In normal circumstances, the electronic stability control — a computerized system that helps prevent skidding — should keep the car under control. But it took too long to kick in with the GX 460, causing it to slide almost sideways into the turn.

Toyota has recalled more than 8 million vehicles worldwide since October, mostly due to flaws in the automaker’s pedal design. The recalls have mostly been confined to Toyota-branded vehicles and the Lexus GX 460 is not covered by them.