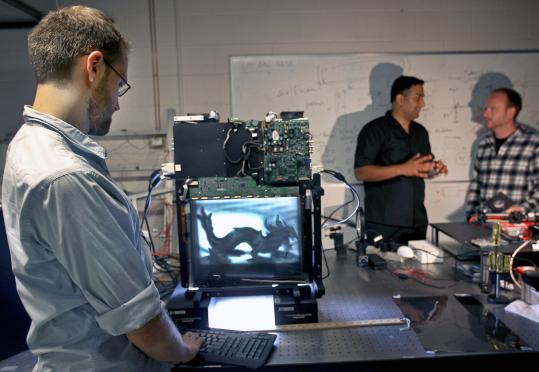 An executive who studies the display imaging industry ought to have a pretty fancy televison set, and Paul Semenza does. He just bought a 60-inch, flat-screen, plasma television with all the bells and whistles, including the ability to display programs in 3-D.

But Semenza, senior vice president at DisplaySearch in Santa Clara, Calif., isn’t going to watch any programs in 3-D. He’s not that thrilled with them, and besides, “I have no intention of buying the necessary 3D glasses,” he said.

Join the club. Sales of 3-D television sets have remained stagnant over the past year or so, at about 10 percent of all sets sold in North America, according to DisplaySearch, despite the best promotional efforts of manufacturers and programmers. The problems are varied: Sets cost 25 percent to 50 percent more than conventional televisions, according to DisplaySearch; just the battery-operated viewing glasses alone can cost $50; there isn’t much 3-D programming available yet; and consumer surveys are rife with complaints about the quality of the 3-D experience itself.

Enter a team of researchers from the Massachusetts Institute of Technology’s Media Lab.

The Media Lab’s Camera Culture Group was scheduled to present its new “glasses-free” 3-D technology on Sunday at SIGGRAPH, the huge display technology and computer graphics conference in Los Angeles. The group hopes its approach will leapfrog current technology, and take years off the wait for better-quality, more affordable 3-D sets, viewable from all angles and without special glasses.

The Media Lab’s “tensor” display, which combines sophisticated imaging software with a prototype display that layers three LCD panels, is still three to five years away from being commercially viable, said Gregg Favalora, a principal at Optics For Hire, an Arlington optics design consulting firm, but it is promising. “I’m optimistic companies can and will make good, quality 3-D products without glasses, and MIT is going to help them get there,” he said. “It’s simply great stuff. I’m an impressed onlooker. The MIT display has very fluid motion, very impressive display capabilities.”

Eliminating the need for special glasses will be key to commercializing the Media Lab’s technology, analysts said. The makers of such well-known brands such as Samsung, Sony, LG, and Panasonic are pushing hard to promote the potentially lucrative glasses-free 3-D sector, the Media Lab group said.

That’s assuming 3-D will sell more televisions. “The question always is: Is this just another 3-D fad that’s going to go away again?” said researcher Douglas Lanman, who helped develop the MIT Media Lab technology.“You see 3-D fads about every 10 or 15 years, and they usually disappoint and then disappear.”

Glasses-free 3-D is now used within some mobile-game devices, such as the popular Nintendo 3-DS, but the quality of existing glasses-free 3-D technology is low, delivering dim images that must be viewed from within a narrow angle from the screen, said members of the Media Lab team.

The MIT system uses three standard LCD screens, one on top of the other, and conventional television backlighting. The device is then stuffed with special software to manage a flood of pixels; an image that offers a 3-D view from different angles must contain much more information than the kind that uses glasses to split the image for each eye of the viewer. Standard, 2-D film or video relies on one still image for each moment in time captured on screen. Current 3-D display technology requires two still images. MIT’s software allows its system to present up to 27 still images at once, all at different angles, to create a hologram-like effect.

There are a number of commercial benefits to the university’s glasses-free 3-D technology, said Media Lab researcher Gordon Wetzstein.Because the MIT technology uses existing LCD screens, “you wouldn’t have to produce a new manufacturing supply line,” he said.

A recent survey of 3-D TV users conducted by Parks Associates, a Dallas market research firm, found that a surprising number of respondents — 56 percent — were “very” satisfied with their 3-D experience. But there was also a deep undercurrent of frustration, said John Barrett, director of consumer analytics at Parks, including such caustic comments as “waste of money,” “glasses are a pain in the neck,” “limited 3-D experience,” “not worth the trouble and expense,” “glasses not comfortable,” and “content is very limited.”

Ramesh Raskar, the Media Lab group’s director, said although there isn’t much his team can do about the lack of 3-D programs, its members hope their technology is pointing the way for manufacturers to produce much better displays.

“It could be transformational,” he said. “That’s what we’re trying to achieve.”

Jay Fitzgerald can be reached at jayfitzmedia@gmail.com.