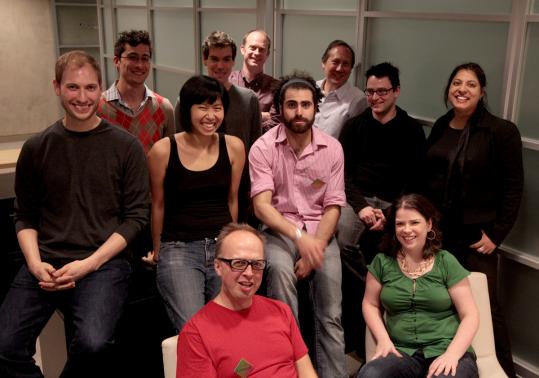 It was down to two finalists: a woman who wanted to buy a couple of goats to rent out as urban lawnmowers, and a sculptor who could “no longer make a case’’ for sculpture and instead wanted to buy a portable welder so he could go around and fix his city.

They were both awesome ideas, the trustees agreed, but only one of them could win money that month. And so they had to ask the ultimate question: Which idea was more awesome?

This is the basic premise behind the Awesome Foundation, which is not an actual foundation. It is more like a support group for good ideas. It began in Cambridge in 2009 when a group of tech-savvy twentysomethings frustrated by the bureaucracy of traditional funding got together and, in essence, said: “You know what would be awesome? If there were an organization that gave you money if you had an awesome idea.’’ Then they became that organization, loosely.

It works like this: Ten trustees each kick in $100 a month, and together they review the submissions - the original chapter, now known as the Boston chapter, reviewed more than 130 for August - and the winner is given $1,000 for the project, with no strings attached.

The idea is so simple, and so devoid of moving parts, that it has multiplied organically, a new nonprofit model for the crowd-sourcing generation. Today there are 23 chapters around the world, as far away as Australia; the latest is in Detroit. Anyone can start one, and the only real rule is that there is no definition for awesome. That’s for each trustee to decide.

The concept of a small grant, handed out by individuals, means the idea has a built-in lightness, said Tim Hwang, who conceived of the Awesome Foundation shortly after he graduated from Harvard in 2008.

“I had a bunch of friends who started fellowships, and I’d see them a month later and they’d be depressed,’’ he said. “They’d be happy about their project, but not about the huge bureaucracy of these nonprofits.’’ Some would be hiding from their funding sources, he said, afraid of being forced to frame their project to fit into a context.

So Hwang basically took a riff from the MacArthur Foundation’s genius grants, which give already awesome people $500,000 to use however they choose, with no stipulations or reporting requirements. The Awesome Foundation founders like to refer to it as a MacArthur grant for micro-flashes of brilliance.

The first project they funded was a giant hammock, proposed by local architect Hansy Better, and it remains an archetypal “awesome’’ project because it was indeed awesome when erected on the Greenway last summer - it could hold more than a dozen people - and involved creating something tangible for the public.

Other fellows have certainly included the whimsical. One month it was a group that holds large public pillow and squirt-gun fights. The Washington, D.C., chapter recently awarded $1,000 to a pop-up theme park where people can be filmed re-creating, in a capital alleyway and with an inflatable ball, the famous scene of Indiana Jones being chased by a boulder. But there is a recurring bent toward socially conscious public projects. The current Boston fellow, graffiti artist Caleb Neelon, was given money to buy supplies for a giant “History of American Graffiti’’ mural on the side of the Tobin Elementary School in Roxbury.

Though the money may be peanuts when compared to traditional funding sources, the recipients say that the grant comes with other intangibles that you can’t buy.

“There’s a disproportionate reward on the back end,’’ said Sara Hendren, a Harvard design student who was given the grant to fund her guerilla art project to update the wheelchair symbol by covering it with stickers featuring her alternate design. “It’s an investment in the ideas of the grantee as much as the project. They harnessed the power of Twitter and their mailing list to publicize my idea, to get it into discussions. And being funded by interested and interesting peers is a whole benefit in itself. It’s great to have a vote of confidence from people you admire.’’

That is part of what attracted a very traditional funding source, the Knight Foundation, to join the Awesome cause; this summer, it gave $244,000 to the Awesome Foundation News Taskforce, an initiative to provide microgrants to citizen journalism projects in Detroit.

The relationship with the Knight Foundation is part of a move that appears to be taking the larger Awesome concept from cute toward serious. While there is no hierarchy, Christina Xu, one of the original trustees, has become something of the public face of the organization; she is the point person for the relationship with the Knight Foundation, and spoke at a TEDx conference, where she outlined many of the mistakes made by traditional nonprofits working in Haiti.

“The more I thought about these things and why they frustrated me,’’ she said of the situation in Haiti, “the more I realized maybe the Awesome Foundation was an answer to this.’’

That may be a reach, but it’s indicative of the sort of thought that attracts people to the Awesome Foundation, the simple belief that ordinary people can create positive change outside of the establishment.

At the August deliberations in Boston, Nadeem Mazen, the newest trustee, was going around the room introducing himself, when he came to Xu, who told him a bit about herself. In addition to the Awesome Foundation, she and Hwang cofounded the Internet meme conference ROFLCon, and she works for Breadpig, an “uncorporation’’ that creates “geeky products’’ and donates all the profits.

Mazen was impressed and asked Xu where she was from.

“I’m from the Internet,’’ she replied.

In the end, the trustees unanimously chose the sculptor as their August fellow. They had questions about the goats, but there was no question that the sculptor’s idea was awesome.