THIS STORY HAS BEEN FORMATTED FOR EASY PRINTING
USER FRIENDLY 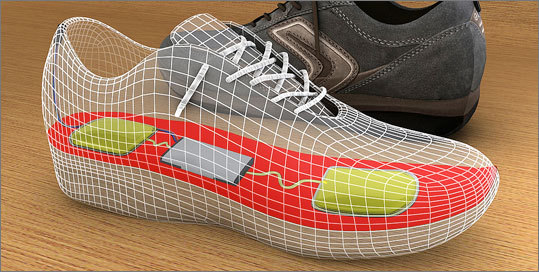 Text size – +
Innovations
Several years ago, Massachusetts Institute of Technology researchers pioneered conversion of the energy we produce by walking, through energy-harvesting footwear. That energy is usually lost as heat.

Trouble is, footwear-embedded harvesters so far have failed to produce the wattage required to keep a cellphone or a smartphone juiced, according to Tom Krupenkin, a mechanical engineering professor at the University of Wisconsin-Madison.

Cellphones require 1 to 2 watts during phone calls, and smartphones need up to 7 watts for Internet browsing, according to Krupenkin.

Now he and a colleague last week said in the journal Nature Communications that they have developed an embedded energy harvester that can generate up to 20 watts of power.

The harvester captures energy from the interaction of microscopic liquid droplets and films only a few nanometers thick.Krupenkin and a fellow University of Wisconsin researcher J. Ashley Taylor are commercializing the technology through a start-up company, InStep NanoPower, LLC.

The InStep energy harvester can be made wireless and integrated with Wi-Fi hotspots, reducing the battery power that a device uses to connect to the Internet, its developers said.

SPORTS TRAINING
iPhone patches your pitch or swing to pros Nowadays, it seems the limits of sports training are dictated only by the state of technology and the size of mom and dad’s bank accounts.

Middleton-based Extra Innings, which runs baseball and softball training centers around the country, has developed a clever iPhone, iPod Touch, and iPad app that puts players in touch with professional trainers.

Here’s how the $5 app, called Extra Innings Mobile Instructor, works: You use your Apple device to record and upload a video of your player at bat, or on the mound. An instructor from a nearby Extra Innings facility (there are seven in Massachusetts), will respond to you within 48 hours, with a whiteboard-style markup of the video.

If there is not an Extra Innings facility near you, you will get your analysis (“elbows up,’’ “knees bent,’’ and so on) from someone at the company’s headquarters.

Instructors (including former major league players, according to Extra Innings), can mark up the video with baseball icons and other shapes, write notes, and add voiceovers.

The app, developed by Aurnhammer LLC, offers more than others meant to lure folks into a company’s brick-and-mortar facilities. This one also comes with one free analysis of a video you submit.

Beyond that, you can buy bundles of three, which range from about $15 for three to $75 for 18 videos.