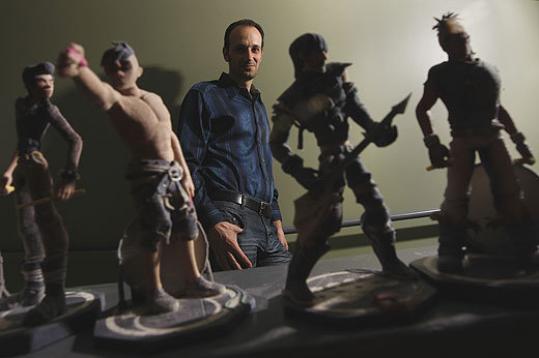 Climbing to the top of the video game industry is difficult enough. Alex Rigopulos, cofounder and chief executive of Harmonix Music Systems in Cambridge, did it once, creating a whole new category of video games with the billion-dollar blockbuster music series Guitar Hero and Rock Band.

The question now is whether Harmonix can recapture that gaming glory. Its latest release, Dance Central, is a solid success, but game industry analysts say it does not - and will not - measure up to the major hits of the company’s past.

No Massachusetts game maker has enjoyed greater success than Harmonix. The company invented the modern music video game when it created Guitar Hero, which taught people around the world to strum plastic simulated guitars in time with their favorite musicians. The company sold the rights to that game, but followed up with a more sophisticated title called Rock Band. Both were immensely popular, with $3 billion in sales between them by early 2009.

The original Rock Band, released in 2007, sold 6.9 million units worldwide, according to the game sales-tracking service VGChartz. A sequel issued the following year moved 4.4 million copies. Then jaded consumers and a brutal recession hammered music game sales, which declined by 50 percent in 2009, and another 50 percent last year. Rock Band 3, released in 2010, sold only 1.4 million copies.

Harmonix’s parent company, Viacom Inc., which acquired the company for $175 million in 2006, sold it four years later for $49.99 - the price of one video game - in a deal that required the buyers to assume $100 million in debt.

Those new owners include Rigopulos, who with other managers and Jason Epstein, a partner in the New York investment firm Columbus Nova, bought the company at that fire-sale price.

Harmonix is now getting back on track, Rigopulos said, by helping to turn gamers from fake musicians into real dancers. Harmonix’s Dance Central has sold more than two million copies since its release last November. The company is busy developing a sequel, Dance Central 2, which will allow two friends to face off in competitive dancing matches.

“It’s a much more mature, fully developed game,’’ Rigopulos said. “The studio feels reinvigorated. There’s a lot of creative energy here now. It feels like a new beginning for us.’’

But analysts say neither version of Dance Central has a chance of matching the popularity of Guitar Hero or Rock Band.

“They’re poised for success,’’ said Billy Pidgeon of M2 Research in Encinitas, Calif., “but not on that scale.’’

One reason is that the potential customer base for Dance Central is much smaller than for Harmonix’s past hits. Rock Band games work on each of the three popular video game consoles: Microsoft Corp.’s Xbox 360, Sony Corp.’s PlayStation 3, and Nintendo Co.’s Wii. But Dance Central is available only to Xbox 360 owners, and only to those who have also purchased Kinect, a sophisticated control device that lets users play games with hand gestures and body movements. Since this technology is found only on the Xbox, millions who own other consoles will never purchase it.

Michael Pachter, game industry analyst at Wedbush Securities in Los Angeles, estimated that about 12 million households have an Xbox 360 and a Kinect, and that not all of these people will buy Dance Central. “It’ll never be as successful’’ as Rock Band, Pachter said.

Besides, Harmonix faces significant competition from other dance games that use the Kinect technology. In April, French game giant Ubisoft delivered a Kinect version of the dance game Michael Jackson: The Experience; versions for other game platforms have already sold more than three million copies.

Ubisoft also produces the hugely popular dance game series Just Dance and plans to release a version for the Kinect in time for the holidays, another potential competitor for Dance Central.

Yet the plastic guitar business isn’t dead. Mad Catz Interactive Inc., which makes simulated instruments, recently struck a deal with Harmonix to rerelease Rock Band 3 in retail stores during the Christmas season. Loyal players still buy new songs for use in the game, according to Rigopulos. “We still actually have a very profitable business in Rock Band downloadable content,’’ he said.

Harmonix is also at work on something entirely new, though nobody at the company will say what it is. Last month, the company trademarked the word Vidrhythm and confirmed it’s the name of an upcoming project, but has declined to offer details.

Harmonix’s comeback may never match its explosive success of just a few years ago. Then again, said Pidgeon, “just staying in business is a plus these days.’’