Founder sees LinkedIn as a force for change 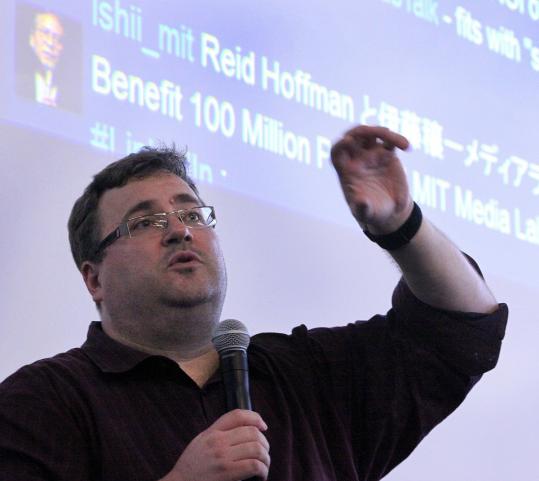 "I wanted to make changes on the scope of (Pat Greenhouse/Globe Staff)
By Hiawatha Bray Globe Staff / July 19, 2011

LinkedIn is more than an online social network, at least according to its founder. It is a force that will help change the world by encouraging a new attitude toward life planning.

Reid Hoffman, LinkedIn Corp.’s chairman, foresees a future in which everybody is an entrepreneur, marketing his or her skills like the manager of a small business. “When you mirror good life strategy,’’ he said, “you actually mirror what entrepreneurs do.’’ With a net worth approaching $2 billion, Hoffman is perhaps the world’s wealthiest philosopher. He has a master’s degree in philosophy from Oxford and once hoped to become a full-time intellectual. “I wanted to help strengthen and create public intellectual culture,’’ he said.

Then he realized his academic work would never change the world. “To produce a piece of relevant philosophical work, it was supposed to be scholarly and narrow enough that maybe about 50 people would read it,’’ Hoffman said during a lecture yesterday at the Massachusetts Institute of Technology’s Media Lab. “I wanted to make changes on the scope of millions.’’

So Hoffman went to Silicon Valley instead, and eight years ago, after stints at Apple Inc., Fujitsu Group, and PayPal, he launched LinkedIn, a business-oriented social network that has attracted 100 million members worldwide. The company reflects Hoffman’s interest in developing “human ecosystems’’ - technology-aided networks of social relationships; in the case of LinkedIn, an ecosystem created around people’s business interactions. Users publish information about their career experience and areas of expertise and make mutually beneficial connections.

LinkedIn went public in May, its shares more than doubling in value from their initial price of $45. Yesterday, JP Morgan, one of the investment banks that underwrote the LinkedIn offering, cut its rating on the stock from “buy’’ to “neutral,’’ sending shares lower. LinkedIn shares closed at $102.44 yesterday, down 6.85 percent for the day.

Still, LinkedIn’s strong performance, and upcoming offerings from hot Internet companies such as online game giant Zynga and Internet shopping service Groupon, sparked concern among investors about a repeat of the Internet stock bubble of the late 1990s. It was a time when companies rushed into public stock markets, attracting billions in capital and sending share prices to stratospheric heights. But many of these companies collapsed a few years later.

Hoffman said he didn’t know whether to expect a new bubble. “I don’t really have a particular view,’’ he said. “I do think that people are excited about the area because it’s an area that shows a lot of promise for growth . . . whether or not any particular market valuation is the right valuation, I leave that to other experts.’’

But Hoffman himself isn’t hesitating to invest in other socially oriented Internet companies. He’s putting money into airbnb.com, a company that lets travelers rent rooms in peoples’ homes, instead of staying in hotels. Hoffman said the site tracks the reputations of guests and renters to ensure that total strangers can share a house safely and profitably. It’s “something that could make a huge difference in people’s lives,’’ he said.