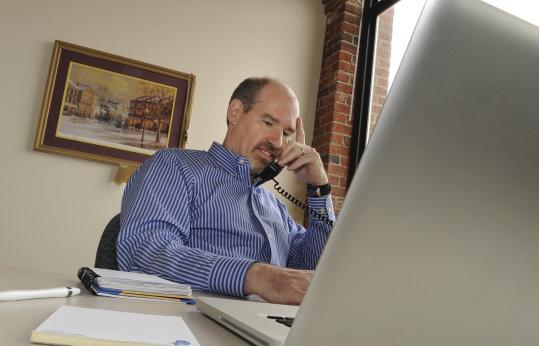 NEWBURYPORT — The e-book revolution has opened a new frontier: In an old brick building overlooking a boatyard on the Merrimack River, a company is offering a new way to publicize books in the digital age.

Publishers who traditionally promoted new releases by sending out paper advance copies — called galleys — to reviewers, bloggers, booksellers, and libraries can now send them as digital e-book files, through the fast-growing NetGalley service.

About 27,000 “professional readers’’ are registered at netgalley.com, more than four times than there were a year ago. Just over 100 publishers use the service, from big publishers like Random House Inc., HarperCollins Publishers, and Penguin Group to small indie houses, including a few that publish only e-books.

NetGalley files can be read on personal computers, iPads, iPhones, and digital e-reader devices like the Nook and Kindle. The service is free to readers, who register and browse an online catalog of books and request advance reading copies from publishers, who must approve the requests.

About 2,000 titles are listed on NetGalley, and reader requests average above 25,000 “copies’ a month, Toolan said. Only 2 to 3 percent of requests are denied, he said, although publishers vary in their policies, even from book to book. Some readers are given automatic access by publishers and are invited to access particular titles.

Publishers make and set-up payment and pay a monthly fee based on the number of titles they have on the site. Toolan would not reveal the amount of the fees, saying they depend on the size of the publisher, but indicated digital copies can be cheaper than paper galleys, which cost an estimated $10 each to produce.

“Cost is a factor, but cost isn’t our primary factor,’’ said Sanj Kharbanda, vice president of digital strategy for the trade and reference division of Houghton Mifflin Harcourt Co., based in Boston.

The publisher signed on with NetGalley in March 2009; some of its existing advance readers were already moving to e-books. But as traditional book-review sections have shrunk, social media have become more influential. Book bloggers and online communities such as Good Reads are increasingly important places to reach book buyers, and publishers can use Netgalley to reach those online “influencers.’’

“Bloggers are particularly big influences emerging in the e-book sphere, because they reach so many different reading communities,’’ said Brendan Cahill, vice president and publisher of New York e-book publisher Open Road Integrated Media. “Those are really important places to be able to get a message out about an upcoming book.’’

Jessica Severson of Brookline, a Kindle user, found NetGalley in January as she prepared for an author interview for her blog, dontmindthemess.com.

The author’s publicist “actually told me I could access the book through NetGalley,’’ said Severson, who had never before received an advance copy of an upcoming book. “As a person who reads a lot and reads book blogs . . . it feels like I suddenly got let into a secret club that I didn’t know existed.’’

Firebrand was founded in 1987, and became known in the industry for products like its Title Management software, which helps publishers track projects from acquisition to publication. About 30 NetGalley customers already used Firebrand software, Toolan said. In 2008, he became majority owner of NetGalley LLC, which was founded by Rosetta Solutions Inc. in Seattle five years ago.

“Part of the reason it was interesting was we could see that e-books were coming,’’ Toolan said.

Just a handful of employees work exclusively on NetGalley, all from home offices around the country. The publishers create the actual e-book files, and NetGalley provides a clearinghouse where readers and publishers can connect easily.

The service also runs customer service and offers digital rights management to help prevent piracy. The exception is for Kindle users, where rights management is handled by Amazon. No reader is ever denied registration, and so far only one has been ejected from the system for piracy, Toolan said.

“The great thing about the way the NetGalley system works is it’s all copy-protected, so we can target a very wide variety of potential reviewers without having to worry about leakage,’’ Cahill said.