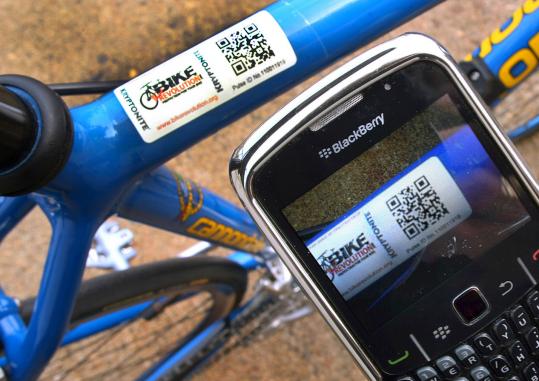 They saw through chains, cut down trees, and pop U-locks with tire jacks to get what they want: Nothing seems to stop determined bike thieves.

And recovering stolen bicycles in Boston is so rare that once they’re gone, they’re usually gone for good. But Kryptonite, the Canton maker of sturdy, U-shaped bike locks, is hoping to provide cyclists with new tools that tap the power of social media to improve the chances of recovering a stolen bike. Starting in Boston this week, Kryptonite will begin selling an identity kit that uses stickers with bar codes that attach to bikes. The company plans to roll out the stickers in 10 other cities in coming weeks.

Priced at around $15 per kit, the labels will allow customers to register their bar codes using a free scanning application they can download to their smartphones. If their bikes are stolen, they report the theft to an online registry, www.bikerevolution.org, which in turn will broadcast an alert to other bike owners using Twitter, Facebook, and other social media sites.

The system effectively enlists members of the cycling community as watchdogs. Armed with their smartphones, other cyclists will be able to check whether a stickered bike matching one on an alert is indeed stolen.

Kryptonite believes the stickers will first work as a visual deterrent, preventing the bike from being stolen in the first place. Failing that, “if somebody does see the bike in an area and something about it doesn’t look right, they can go up and scan the tag, and they’d be immediately directed toward the website,’’ said Kryptonite general manager Karen Rizzo.

Kryptonite is one of the best-known lock makers in the United States, pioneering the now-prevalent U-lock in the early 1970s. Company officials acknowledge that no lock is 100 percent theft-proof, so the ID tags are meant as supplemental security.

Nearly half of bikes stolen in Cambridge in the first half of 2010 were locked, according to city police. Bike theft overall in Cambridge has been increasing. Several years ago Kryptonite published rankings of what it said were the worst cities for bike thefts, and Boston was near the top of the list.

Bike advocates say stolen bikes are only rarely returned to their owners, so they welcomed the new level of security from Kryptonite. But some questioned how effective it will be.

“I see the crazy things these thieves do to take these bikes. It’s hard to believe somebody’s not going to find a way around it,’’ said Bryan Hance, a cyclist in Portland, Ore., and operator of Stolenbicycleregistry.com.

Hance identified the stickers themselves as a major potential weakness: “I think your average person who’s been stealing bikes for longer than 10 minutes is going to realize the first thing I need to do is take this sticker off.’’

Kryptonite acknowledged the stickers can be removed — but not easily. The stickers are made with a heavy-duty adhesive, similar to what is used on license plate tags, and are designed to crumple and stick if tampered, instead of peeling off cleanly.

“The material that the sticker has been made from, it would take quite a bit of time and effort, and you’d do a pretty good job of scratching up the frame around the label if you were trying to get it off,’’ Rizzo said. “If somebody wanted to turn around and resell it, that would probably be something that would raise suspicion.’’

The City of Boston also maintains a bike registry that works similar to the one Kryptonite is using — though without the bar code system. Cyclists can report a theft at stolenbikesboston.com and typically provide a description of the bike — the make, model, and other identifying features, where it was stolen or last seen, and often a picture. The registry sends alerts via Twitter, Facebook, and e-mail about a newly reported theft to other registered cyclists.

Nicole Freedman, the director of bicycle programs for the City of Boston, said the website has been successful in getting cyclists to register their bikes, but it hasn’t led to many stolen bikes being returned to their owners.

Still, given Kryptonite’s reputation, Freedman was optimistic about the new bar code system.

“Kryptonite’s business is making bikes secure,’’ Freedman said. “I suspect whatever they do is going to be very effective.’’

Andrew Prescott, owner of the Urban AdvenTours bike and rental shop in the North End, said he plans to stock the labels and use them on his rental bikes, as well. He said he expects the product to be an effective deterrent against thieves.

“Even if people don’t know what it is, they’ll be cautious about it,’’ Prescott said. “It’s kind of like an ADT sign outside your house: This bike is being monitored.’’

Have you ever had a bike stolen?