See aliens invade the Greenway — if you have the app 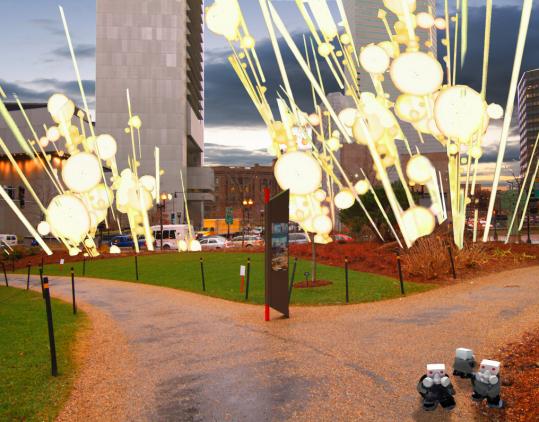 Text size – +
AUGMENTED REALITY
Over the next few weeks, some visitors to the Rose Fitzgerald Kennedy Greenway in downtown Boston will be able to see things through their smartphone cameras that the rest of us can’t.

Think John Carpenter’s “They Live.’’ Like the special sunglasses Roddy Piper wore in that film, only a certain “alien detection app’’ on smartphones will allow people to see invaders descending on the Greenway, the Boston Children’s Museum, and other spots.

The aliens will appear as cartoon-like graphics superimposed on the smartphone user’s live camera views.

In some places, they might appear to be trying to control foot traffic in the Greenway, for example.

The alien invasion piece, Mark Skwarek’s Occupation Forces (www.occupationforces.com/greenway.html), is part of an augmented reality scene around the Innovation District that’s being created by artists in this year’s Boston Cyberarts Festival (bostoncyberarts.org), which begins Friday.

The Manifest.AR/ICA artists, including John Craig Freeman and Will Pappenheimer, are using Layar’s ability to determine a smartphone’s location and orientation and superimpose digital art on the device’s screen, so that it appears a piece is integrated into the real world.

Instructions for Occupation Forces are not yet available.

A comeback for the Commodore 64

If you were a nerd in the 1980s, the PC you owned really said something about you.

My friend Deane, who became a computer programmer, owned the IBM PS/2.

His computer had a floppy-disk drive and a realistic flight-simulator program. He covered his PS/2 every night with a dust jacket.

As for me, I had the boxy, more primitive-looking Commodore 64, with a cassette tape deck for data storage. I recall the games I played on the thing (which Deane mocked) as being of limited quality.

Now, looking at the resurrected C-64 (www.commodoreusa.net/CUSA_C64.aspx) from the folks who own the Commodore brand, I am feeling some pangs of nostalgia.

While the new C-64 has the same shape as the original — even its keys are exact replicas — the machine’s guts are all 21st century.

You can also opt for a Blu-ray drive for the C64x and hook it up to HD monitors and TVs for 1080p HD video viewing.

The C64x is a Linux box: It ships with a disk containing the Ubuntu 10.04 LTS operating system. But its manufacturer, Commodore USA LLC, says the machine is fully Windows-compatible.

And if you are a fan of 8-bit gaming, Commodore USA promises it will ship out a Commodore OS 1.0 emulation package with games when it becomes available.