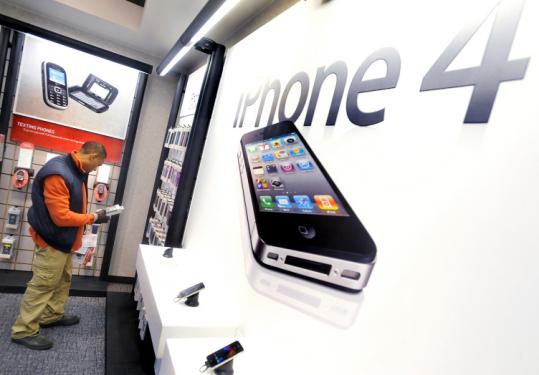 Verizon said it may limit the download speeds for some customers in areas where they risk jamming the network. (Mickey Welsh/ Montgomery Advertiser via Associated Press)
Bloomberg News / March 2, 2011

NEW YORK — Verizon Communications Inc. will stop offering unlimited data plans for Apple Inc.’s iPhone as soon as this summer and switch to tiered pricing, which should generate more revenue and hold the heaviest users in check.

The carrier, which began selling the iPhone last month, offers a $30 unlimited data service for the device. But such plans for the handset are “not a long-term solution,’’ finance chief Fran Shammo said yesterday at a Morgan Stanley conference.

After beginning iPhone sales in February, Verizon said it may limit the download speeds for customers who are among the top 5 percent in data consumption, in areas where they risk jamming the network. Verizon also has an opportunity for additional revenue as customers adopt smartphones because they tend to use more data than customers with more traditional devices, Shammo said.

AT&T in June stopped offering unlimited data plans, except to those already under contract.

Here are 12 things to know about the iPhone's second home.
Your comment is subject to the rules of our Posting Policy
This comment may appear on your public profile. Public Profile FAQ