Advances in mobile technology provide the blind with new tools 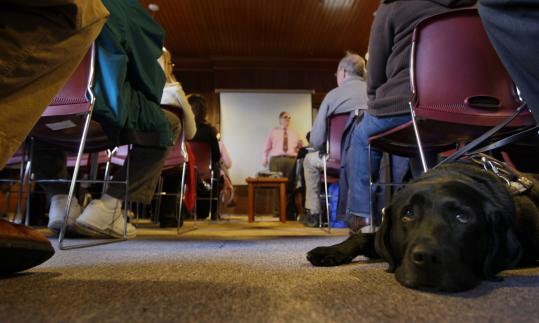 Zhenya Pankova sends and receives 200 text messages a day. That’s typical for a ninth-grader. But to read her texts, she presses her Samsung cellphone to her ear. Pankova is blind.

The 14-year-old can also search the Web, read textbooks, and translate Spanish assignments. For that, she uses the BrailleNote Apex, a wireless device about the size of a netbook computer that she carries over her shoulder.

“The advancements are incredible for kids,’’ said Janet Ulwick-Sacca, who teaches children with visual impairments at Georgetown High School.

Earlier this week, Pankova attended a technology fair at the Carroll Center for the Blind in Newton to check out the latest products from the evolving market called assistive or adaptive technology — products for low-vision and blind people.

Smartphones such as the LG series, iPhone, Droid, and Samsung Haven now include features that allow the devices to speak aloud information that would normally be displayed on-screen.

Previously, a blind person would have to buy text-to-speech software such as Mobile Speak, which can cost upward of $400, for similar capabilities.

Many of these lifestyle features are not made specifically for the blind, but for users who multitask. Similarly, smartphone apps like oMoby, marketed as a tool to help consumers identify products by taking a picture, are helping blind people like Brian Charlson shop.

In the past, he would have to shop with a sighted person and slap a magnetic Braille label on the food he bought so he could identify it at home. Now he snaps a picture with a free app, and his phone gives him information about the item, including pricing and where else it can be found.

“When something becomes interesting to the sighted public, it might make it accidentally have more use to me,’’ said Charlson, director of computer training services at the Carroll Center. “It’s improved my quality of life dramatically. I’m not dependent on a sighted person to do things for me that I can do myself.’’

The design and ease of use of adaptive technology improves each year. One example is the Victor Reader Stream by HumanWare, based in Quebec. “It’s an iPod for someone who’s visually impaired,’’ said Greg Stilson, a HumanWare product and support specialist who is legally blind. About the size of a smartphone, the digital device “reads’’ books, text, and MP3 sound files that have been downloaded onto a flash memory card.

The hand-held tool is light years away from the Braille writer Stilson carried when he was in school. “It weighed 20 pounds, and I’d have to lug it from class to class,’’ he said.

When the Americans with Disabilities Act passed in 1990, the World Wide Web was just coming online. An updated law, the 21st Century Communications and Video Accessibility Act, was designed to allow people with disabilities to have full access to print, television, the Internet, and other electronic communications. Signed into law by President Obama in October, it was introduced last year by Massachusetts Congressman Edward Markey, a Democrat from Malden.

Among the law’s provisions: Every new smartphone model must be accessible to blind people. “It means instead of having two choices, I will have as much choice as you do,’’ Charlson said.

Social networks like Facebook are a challenge for blind people, but companies like Freedom Scientific are offering products that help. Its JAWS screen reader, for Job Access With Speech, converts Facebook and other status updates into audible speech. But with so many hypertext links and moving parts on Facebook, not all members of the blind community have embraced it.

“I’m good with Twitter,’’ said Gayle Yarnall, 63. The director of adaptive technology at Perkins Products, a technology and training company for the blind in Watertown, Yarnall uses the program Qwitter to tweet via speech and keyboard commands.

Jennifer Harnish of Natick, 40, began losing her sight when she was 15. She uses an iPod Touch docked in a keyboard device to take notes. By tapping the notes application, she can e-mail herself what she’s written. While adaptive technology is no replacement for writing by hand, something she wishes she could do, the enhanced capabilities for the sight-impaired provide a lifeline. “It’s amazing to go into the store and be able to use something right off the shelf,’’ Harnish said. “When you are blind, you don’t want to look blind. You want to have the same capability as everyone.’’

The market for adaptive technology is still small. There are 1.3 million blind people in the United States, according to the National Center for Health Statistics, and not every potential user knows what’s available. “It’s going to take Steve Jobs’s or Bill Gates’s mother to come down with macular degeneration to really change the marketplace,’’ said Scott Krug, president of Let’s Go Technology in Worcester, which sells magnifiers for the low-sighted.

Many of Krug’s products are not available in stores like Wal-Mart or Best Buy. “The market right now is too small for these big boys,’’ he said. “But the more people hear about these advancements, the more they want it.’’