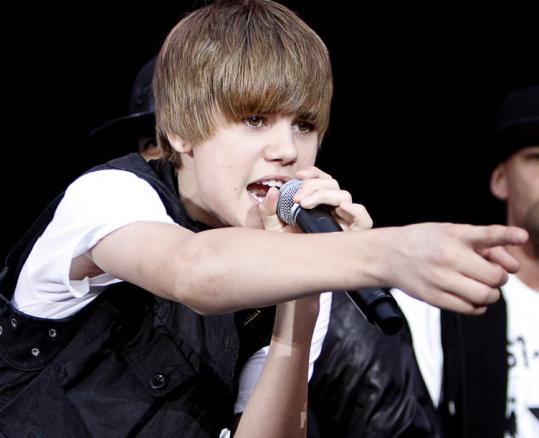 On BiddingForGood.com., once known as CMarket, you can now bid on things like a guitar autographed by Justin Bieber. (Robert E. Klein for The Boston Globe/File)
By Scott Kirsner Globe Correspondent / September 27, 2010

The farmer and the robot can be friends. Charles Grinnell believes every farmer needs a few good robots working his acreage, and this morning Grinnell is expected to say he has wrapped up a $5.3 million first round of funding for his Billerica start-up, Harvest Automation.

The company, which once tested its prototypes in a greenhouse behind Grinnell’s home in Groton, initially had trouble finding financing to develop a robot strong and rugged enough to move potted plants around as they grow in nurseries. Harvest says its first target market will be the largest growers in the $4 billion wholesale ornamental plant market, i.e., the kind of company that grew that ficus tree sitting in the corner of your reception area. These plants get moved a lot from the time they are tiny seedlings to when they head for the marketplace, and Harvest’s robots are designed to take over that manual labor. The company has not yet begun selling the robots to customers yet.

The new funding is the biggest investment so far for Founder Collective of Cambridge, which joins other investors, including Massachusetts Technology Development Corp. Joining a new advisory board Harvest has formed are Colin Angle, chief executive of iRobot, and Mick Mountz, chief executive of Kiva Systems, a Woburn company that makes a robotic order-fulfillment system for warehouses. (Harvest’s chief technology officer is Joe Jones, who led the development of the Roomba robotic vacuum cleaner when he worked at iRobot.)

“I think Harvest as a company really plays to the strengths of Boston,’’ says Eric Paley of Founder Collective. “There aren’t that many people with the expertise to create these complicated hardware-and-software systems.’’

Harvest’s belief is that growers will turn to robots to improve their productivity while lowering costs and that robots can reduce the risks that some growers face of hiring undocumented workers and facing enforcement actions and fines.

Bringing charity auctions online. When I first wrote about a start-up called CMarket, in October 2003, it was a little company challenging eBay for supremacy in the world of online auctions to benefit nonprofits.

Since then, the Cambridge company has raised $30 million (from investors such as Morningside Technology Ventures and Canaan Partners) . . . grown to 42 employees . . . changed its name from the generic-sounding CMarket to BiddingForGood.com. . . . and generated $98.5 million for various nonprofits. Company founder Jon Carson tells me that they plan to mark the $100 million milestone early next month with a party.

“What we’d initially developed was a tool for nonprofits to put their auctions online, for the 90 percent of people who couldn’t make it to the fund-raising gala to bid on things,’’ Carson says. “And what we found is that the philanthropy sector turned out not to be early adopters.’’ He says it took the company nearly four years to run its first 1,000 actions and just over a year to do the next 1,000.

On the site today, you can bid on things like a guitar autographed by Justin Bieber; a VIP tour of the US Capitol, followed by lunch with a senator; or an aerial tour of the New Hampshire seacoast.

As for eBay, Carson says: “They’ve been the best of all competitors. They’re out there, and they have two people who work in this space [nonprofits]. But it is the age-old story of a specialist innovator picking off a corner of the generalist’s market.’’

Playing Pongr does not require an app on your mobile phone — just snap a photo of an advertisement or product and e-mail it or text it to the company. Sending in a photo of your favorite ice cream after you’ve demolished a pint of it, for instance, might get you a reward from the company (like a discount on your next purchase), or it might help you gain status within Pongr’s system. The goal is to ascend the corporate org chart from intern to chief executive. Pongr founder Jamie Thompson says that the photo-based game is a way for marketers to identify the biggest fans of their product and build relationships. Through the magic of social media, of course, Pongr players can also share the photos they have taken with friends, generating even more brand awareness.

“People already like to take pictures of themselves with brands,’’ Thompson explains. “So if you’re a Sephora enthusiast, and you’re inclined to take your picture in front of their lipstick poster, with Pongr you can do that and see if Sephora is going to give you anything in exchange.’’