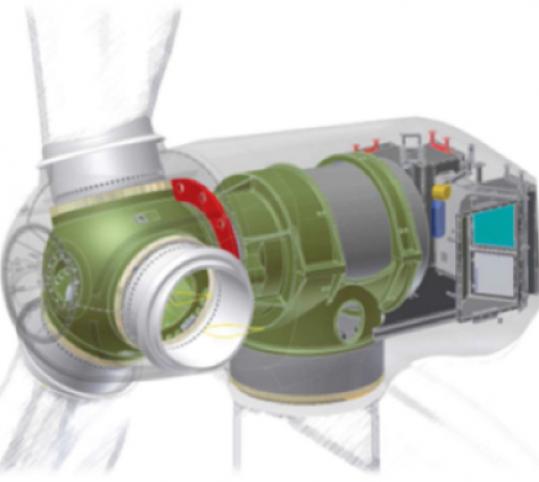 American Superconductor says its high-temperature cable is key to the SeaTitan turbine’s efficiency.
By Joel Brown Globe Correspondent / May 5, 2010

A Massachusetts company says it will develop the world’s highest-capacity wind turbines, hoping to capitalize on an expected boom in offshore wind farm construction.

American Superconductor Corp.’s SeaTitan turbine will use high-temperature superconductor wire manufactured at its plant in Devens, which employs 200 people.

American Superconductor officials said they anticipate the offshore market for large-capacity wind turbines to reach $1 billion by 2016. Recent announcements of large offshore wind farms in the United Kingdom and China fueled their optimism, they said, and they believe the United States could eventually follow suit.

Although the company has targeted the offshore wind power market, it will not be supplying Cape Wind, the wind farm proposed for Nantucket Sound, which received federal approval last week to proceed.

“We all firmly believe SeaTitan is going to be the dominant wind turbine for offshore applications,’’ said American Superconductor cofounder and chief executive Greg Yurek.

The company has been working on SeaTitan for two years, and has about a dozen employees here and in Austria who are dedicated to the project. “We expect to license the SeaTitan within months, certainly by the end of 2010,’’ Yurek said.

The turbine will be capable of generating 10 megawatts of electricity — about 40 percent more than the largest machines available today, according to company officials. Each megawatt is enough to power 300 to 400 homes, they said. Yurek acknowledged that other companies are working on 10 megawatt turbines, but he cast doubt on their capacity to work efficiently without the superconductor wire.

That technology is American Superconductor’s advantage, according to Carter B. Shoop, a Deutsche Bank Securities analyst covering the green technology industry. “Definitely, the trend is toward larger turbines,’’ Shoop said. “And if they’re able to use [their] cables to make those larger turbines smaller and more efficient, then it’s going to play well into AMSC’s ends.’’

The high-tech wire can deliver up to 150 times as much electricity as standard copper wire, officials said, allowing the company to design turbines that are as much as 50 percent smaller and lighter than those of the same capacity built with standard technology. That’s especially important for offshore wind farms, where subsurface support structures are often an even larger part of the cost than the wind turbines themselves.

“If you use conventional technology, they just go off the charts in the size of electrical generators that go inside. Literally you cannot even get the permits to take them over the roads to get them onto the ship to take them out to sea,’’ Yurek said. “But wind farm developers want to go to 10 megawatts because of the economics: ‘Boy I’d like to get twice as much electricity for the same costs.’ ’’

The company designs the turbines and provides the wire and control systems, while the actual assemblies, including towers and blades, are built by licensees. Among the large customers for the company’s electrical system products are China’s Sinovel Wind Group Co. and Korea’s Hyundai Heavy Industry Co.

American Superconductor officials said an industry rule of thumb is that a completed wind turbine costs roughly $1.3 million per megawatt.

Company officials said they will eventually design similar equipment for wind farms on land, which will be called the PrairieTitan. But for a variety of reasons, offshore sites will be “the dominant solution’’ in the next decade, Yurek said.

American Superconductor was founded in 1987 by several Massachusetts Institute of Technology professors. In addition to wind turbines, it makes power systems designed for shipping, and power grid equipment.