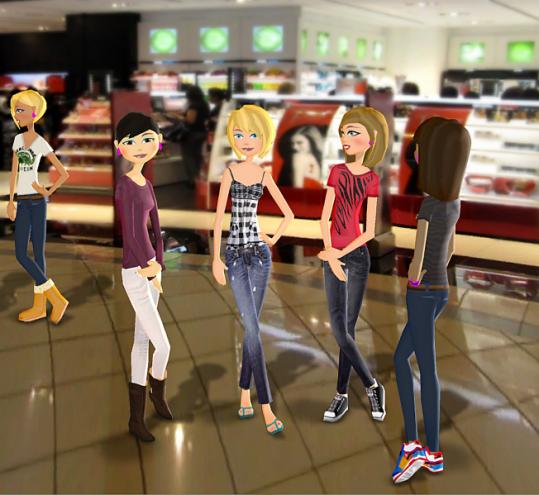 It was an opportunity to show off the three-dimensional virtual environment his Boston company had been working on, intended to attract young Internet users and allow them to deck out online rooms with all sorts of branded merchandise - some of which they might also decide to buy in the real world. Then, they could invite friends over to socialize.

Hangout, Anthos told the crowd, would combine some of the best elements of MySpace and Facebook, the two massive social networks, and The Sims, a popular video game. After his presentation, Anthos got feedback - much of it positive - from a panel of on-stage experts that included Marissa Mayer, a senior executive at Google, and Ron Conway, one of the investors who bankrolled the search company in its earliest days.

But two months later, Anthos found himself laying off some of his 35 employees, and earlier this year he said he hired a top technologist from Disney, and would be moving the company’s product development efforts - and the bulk of its staff - to Southern California.

Virtual worlds have been generating lots of buzz since Second Life launched in 2003, and this year the buying and selling of virtual goods - typically digital images of things like birthday cakes or bouquets of roses that can be swapped by Internet users - is expected to hit an astounding $1 billion in the United States.

But Hangout is still trying to find a foothold in this fast-changing part of the tech world, as is a Cambridge start-up called Viximo Inc. In this niche, where online games and social networks converge, fads, trends, and fickle consumer tastes can mean the difference between success and failure. This week, Hangout will be beginning a limited beta test of a new version of its product, and Viximo says it’s on the verge of disclosing several big partnerships.

What happened after Hangout’s coming-out party in San Francisco?

The company had intended to create virtual spaces that could be embedded, or integrated, into any place a user wanted, like a Facebook page or a blog. But to view them, users needed to add a plug-in to their Web browsers, which filtered out some users. And while it was cool to have the ability to rearrange furniture and move through environments that seemed to have real dimensionality, it required a fairly powerful computer.

“It was visually stunning, but processor intensive,’’ explains Carrie Wiley, a former Hangout executive who supervised the design team.

Even Anthos now acknowledges, “close to 30 percent of the users couldn’t play in the space at all because their computers weren’t sufficiently powerful.’’ In pursuit of a product that looked great, Hangout had taken a few too many technological leaps ahead of the consumer.

And with few users spending time in Hangout’s virtual spaces, they weren’t likely to encounter their friends - it was like a party that never seemed to take off. The company’s business plan had envisioned developing relationships with companies that would pay to have their brands and products placed into the virtual world, in the same way BMW might pay to have its newest model featured in a movie. Without enough users, though, there wasn’t much interest from marketers.

“Hangout needed to take their tech and turn it into a game - a compelling entertainment experience,’’ explains Mike Hirshland, a partner at Polaris Venture Partners who serves on the company’s board.

Earlier this year, Anthos recruited Mike Goslin, a top executive who’d been responsible for designing hit games for Disney Online. Goslin brought with him a small group of techies. The company’s big Boston office turned into a ghost town, and the action moved to Burbank.

Now, the company hopes to use free games on Facebook to bring users into Hangout’s virtual world. (Interestingly, when the company developed a March Madness basketball game on Facebook in 2008, investors thought Facebook would be a distraction for the start-up.)

The first game, Fashion City, invites players to dress models and then have them walk the runway in a 3-D fashion show, getting ratings from judges. The game serves as what Anthos calls an on-ramp into the world of Hangout, where users will be able to pay real money to buy virtual goods - like clothes, food, and furnishings. And as an incentive for throwing big parties in their virtual spaces, users can raise real money for selected charities.

“The most important factor in any online game or social network is the user engagement - the addictiveness and the fun factor,’’ says Jon Radoff, chief executive of GamerDNA, an online community for gamers based in Cambridge. “If you can combine that engagement with a high desire for virtual goods, then you have something that is both a good experience for the user, and also monetizes well.’’

Also trying to build a business on selling virtual goods is Viximo, which helps website operators add virtual goods to their sites. On a dating site, for instance, one single might pay $6 or $12 to send another an animation of “two peas in a pod dancing around with music,’’ chief executive Dayna Grayson explains. Viximo has established a network of artists who constantly create new virtual goods, and then distributes them to sites like BlackSingles.com and Zorpia, a social network based in Australia.

But under its first chief executive, Rob Frasca, Viximo got off track and began building iPhone applications and a development toolbox for other creators of iPhone apps. The investors didn’t think there was enough money in that business, and so Grayson, a junior member of the team at North Bridge Venture Partners, was dispatched to set things straight. She now brands the iPhone detour “a fun experiment,’’ but says, “you’ve got to focus on doing one thing well, and our customers are social networks.’’

Since the spring, Anthos says he has been ping-ponging back and forth between Hangout’s offices in Boston and Burbank - and getting an immersion education in the new rules of the digital entertainment business.

“Doing entertainment right is always a bit (like) trying to catch lightning in a bottle,’’ he says. The company he worked on before Hangout operated in the much more predictable world of corporate data integration - getting different computer systems to talk to one another. “Anything that is fun,’’ he says, “is two-thirds science, and one-third art.’’

© Copyright 2009 Globe Newspaper Company.
Graphic
Your comment is subject to the rules of our Posting Policy
This comment may appear on your public profile. Public Profile FAQ