Fantasy game may be a tough pitch 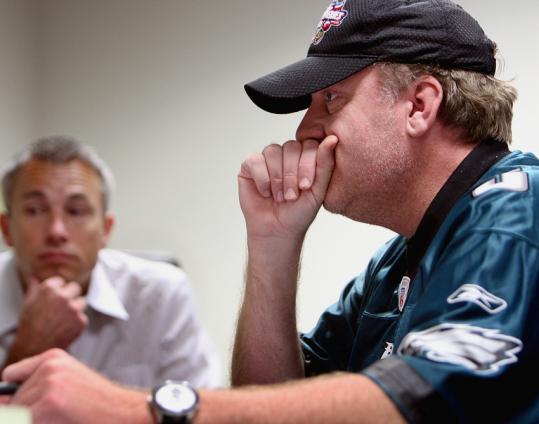 Five days a week, retired Red Sox pitching ace Curt Schilling drives to his new job at an old mill complex in Maynard. Schilling is the hands-on founder, chairman, and primary investor at 38 Studios, a start-up that is building an online video game code-named Project Copernicus.

Instead of scouting opposing hitters and strategizing with his catcher, Schilling now recruits executives and reviews the design of characters like Sea Hags and Gnome Praetorians in the Tolkien-esque fantasy realm where the game is set. But like many entrepreneurs, Schilling spends a big chunk of time these days wooing potential investors.

Even with a household name, it’s a major challenge to find backers to buy into his dreams. Right now, he is trying to raise enough money to build a blockbuster game that he hopes will compete head-to-head with the online fantasy gaming industry’s top offering. The company estimates it will take $50 million to more than $100 million to complete the game.

Raising money is “a challenge,’’ Schilling says, “but that’s part of the attraction for me.’’

38 Studios’ goal - the company’s name comes from Schilling’s old uniform number - is as ambitious as Schilling was when he vowed to lead the Red Sox to a championship upon joining the team, even though the team hadn’t won the World Series in more than 80 years. The company has set its sights on building a credible rival to World of Warcraft, the online fantasy game owned by the media conglomerate Vivendi SA. WoW, as it is commonly called, is a massively multiplayer online role playing game with 12 million players, who each pay a monthly fee; those subscription fees generate more than $1 billion in revenue each year.

Schilling’s company has targeted a tentative release date of December 2010 for its game.

“You don’t see very many markets where there is a Coke and no Pepsi,’’ says Brett Close, the chief executive Schilling recruited from Electronic Arts Inc., a publicly traded video game company in California best known for games like Madden NFL and The Sims. “That’s what you have with WoW. Other products have been successful, but they’re not the massive competitor that I know will exist.’’

But 38 Studios is far from the only company trying to take on WoW. And the company’s approach so far is largely a mystery to analysts and gamers. The company hasn’t said much about its game - though there is a prototype that employees play for testing purposes and show to prospective partners and investors.

Close says it will be more “emotionally engaging’’ and “story-driven’’ than the typical online game - though it’s clear there will be plenty of monsters that attack, and caped heroes defending themselves with a sword in each hand. (In Schilling’s fantasy world, the villains do not include umpires who make bad calls.)

Jon Radoff, chief executive of the Cambridge gaming site GamerDNA.com, estimates “several-hundred million dollars’’ has been spent on WoW since it launched in 2004, which makes taking on that game “like saying you’re starting a company that is going to compete with Disney.’’

Still, he said that he believes there’s room for a rival: “A lot of people are looking for something new, and a lot of the competing products just haven’t been that good.’’

Creating a massively multiplayer game can take several years and is akin to designing an alternate universe. It involves lots of artwork, animation, and software programming. While a feature film might have two or three hours of music written for it, for instance, a team of composers at 38 Studios is writing 80 hours of music to accompany every possible game scenario. Additionally, the environments and characters are sketched first, then built in the computer as 3-D digital objects. Then, there must be testing. WoW was in development for five years.

Even after a massively multiplayer game is launched, “99 percent of them fail,’’ said analyst Mike Hickey, who tracks the games industry at Janco Partners Inc.

In the three years since he founded 38 Studios, Schilling, an avid gamer who has spent hours playing WoW, has been getting an immersion education in the world of start-ups. He assembled a team that includes the best-selling fantasy novelist R.A. Salvatore, who lives in Leominster, and the popular Canadian comic book artist and toy designer Todd McFarlane.

Now, Schilling’s primary job is getting investors to join his crusade - with no luck as of yet.

“At first, the only reason I was meeting with Curt is because I was a fan,’’ says Boston venture capitalist Jeffrey Bussgang, who spoke with Schilling about investing in 38 Studios early on. “But when we met, you couldn’t shut him up about building a great game. He is a compelling entrepreneur, and he has recruited a great team.’’

Still, Bussgang’s firm, Flybridge Capital Partners, declined to invest in 38 Studios, as have several other local venture capital firms. In fact, so far, the company’s funding has come mainly from Schilling - who will say only that he has invested “far north’’ of $5 million - with an assist from Doug Macrae, an entrepreneur who started his first video game company in Cambridge in 1981. But Schilling said he doesn’t regret turning down offers of investment that didn’t value the company highly enough.

“I’m not going to complain about the economy,’’ Schilling said. “It’s like pitching on a rainy day. The other guy has to pitch in it, too.’’

Adding to the company’s need for cash, in May, Schilling and Close made a risky deal, acquiring a Maryland game development studio called Big Huge Games. Close says the acquisition will enable 38 Studios to develop versions of its game not just for personal computers, but also for gaming consoles like Microsoft’s Xbox 360. Big Huge Games also has several games in the works that could generate revenue even before Project Copernicus is finished.

But the purchase doubled the company’s headcount, to about 140 employees, and game industry executives who have run similar size companies estimate 38 Studios’ annual operating expenses at $15 million to $20 million.

The company’s size, coupled with Schilling’s ambitions, has made 38 Studios an object of great interest on the local video game scene: Will it succeed, or will this be a very expensive misfire?

“There’s a lot of luck involved when you ship a game,’’ says Jason Booth, a game industry veteran working at Harmonix Music Systems in Cambridge. (Harmonix created the hit games Guitar Hero and Rock Band, which became the game to most quickly reach $1 billion in sales earlier this year.) But, “if you can be at the right place at the right time with the right idea, you’ll make a metric ton of money.’’