A Boston software maker says that its suggestive new videogame is getting a raw deal from Apple Inc., maker of the popular iPhone.

Last Saturday, Apple said it would not sell the latest version of Metaversal Studios Inc.'s game "Hot Dog Down a Hallway" because it contains sexual innuendo. Yet Apple continues to sell an earlier version of the game, which the developer said includes the same suggestive content.

A spokesperson for Apple confirmed that it had barred the latest version of the game but did not respond when asked why the earlier version remains available.

Because games and other programs for Apple's iPhone and iPod Touch music player can be purchased only through its online retail store, Apple controls which ones will be sold. The company has reserved the right to reject "content or materials that in Apple's reasonable judgment may be found objectionable by iPhone or iPod Touch users." But many software developers say Apple's standards are vague and inconsistent.

"It's very much like Bugs Bunny humor from the 1950s," Laird said, claiming that the salacious wordplay will amuse adults while going over the heads of children.

Laird admitted that the game has a risqué subtext. "This all started from the term 'hot dog down a hallway,' which is a sexual innuendo," he said.

In the game, players try to launch a hot dog down a corridor lined with various hazards. Players earn "achievement" awards, which are described using suggestive slang terms. "That's what's really been selling the game," Laird said, "because all of the achievements are double entendre."

The original iPhone, released in 2007, did not run software created by companies other than Apple. But last year, the company enabled independent software developers to write small programs, or apps, for everything from business management to gaming. In the past nine months, users worldwide have downloaded over a billion apps for the iPhone and the iPod Touch.

The producers of the animated TV series "South Park," which is known for vulgar language, had planned to develop an iPhone app, but Apple rejected it, saying that it was "potentially offensive." Earlier this month, the company rejected an app produced by the rock band Nine Inch Nails because it contained a vulgar song lyric. Band leader Trent Reznor complained that the same word appears in the band's recordings, which are sold on Apple's online music store. Apple relented; the app can be downloaded free of charge, vulgarity and all.

Alex Miro, founder of Krapps.com, a website that reviews "wacky, weird, stupid and strange" iPhone apps, broke the "Baby Shaker" story. Miro agrees that the game went too far, and he thinks other iPhone apps also cross the line. He cited "Peep Show," which allows players to gradually expose the scantily-clad body of a woman by nudging simulated coins into a digital slot. Apple has assigned the game a rating of "9+", meaning that the company considers it suitable for children age 9 or older. "Come on," said Miro. "What are you guys thinking?"

The problem, said Miro, is that Apple hasn't developed clear and consistent guidelines. "It's very, very vague," he said.

This summer, Apple will release the newest version of its iPhone and iPod Touch software. The new program will contain a parental control feature that will let parents decide which apps their children can access. 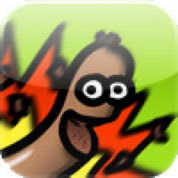