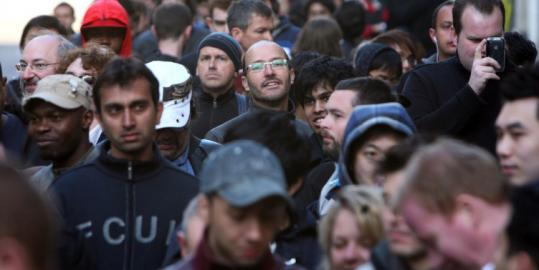 LONDON — In the basement of Paris’s Louvre museum, the early line for Apple Inc.’s iPad far surpassed that for entry to see the Mona Lisa.

Hundreds lined up at the Apple store in the Carrousel du Louvre shopping center in the museum complex, with staff cheering every purchase, as sales outside the United States of the tablet computer began yesterday. In Sydney, fans braved the chill of the Southern Hemisphere autumn to be among the first to buy the device, while in Tokyo people waited for as long as 40 hours to make a purchase.

“I tried to buy one in Seattle when I was there about 15 days ago, but they were sold out; so I decided to wait till it came to Europe,’’ said Julien Boidin, 28, who works for Microsoft Corp. in Paris and has an iPhone and a Macintosh computer. “I live in Normandy and commute for four hours a day. I needed something for the train ride.’’

Following the sale of one million of the devices in less than a month of its April 3 debut in the United States, the iPad is now available in Australia, Canada, Japan, and six European countries. The maker of the iPhone and iPod, which this week became the world’s most valuable technology company, has popularized a new category of computer between a smartphone and a laptop. Apple may sell eight million iPads this year, according to Royal Bank of Canada.

“The thing with Apple is it’s not just a piece of technology, it’s actually the whole experience,’’ said Rahul Koduri, 22, an engineering student in Sydney, who arrived at 2 a.m. Thursday to be first in line. “They just fit into your lifestyle so well. There’s no other product that does it.’’

The company, based in Cupertino, Calif., delayed the release of iPads outside the United States after underestimating demand at home. In Europe, the iPad will be available in Germany, France, Italy, Spain, Switzerland, and the United Kingdom.