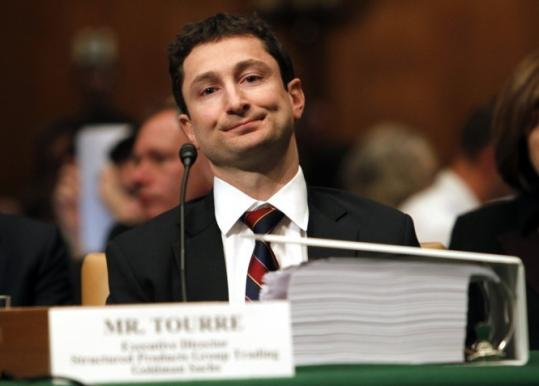 WASHINGTON — Even before the first question was leveled inside the Senate chamber, yesterday was going to be uncomfortable for Goldman Sachs. But then the questions kept coming — and coming and coming.

Into the evening, Goldman Sachs executives met with confrontation and blunt questioning as senators from both parties challenged them over their aggressive marketing of mortgage investments at a time when the housing market was already starting to falter.

In an atmosphere charged by public animosity toward Wall Street, the senators compared the bankers to bookies, and asked why Goldman had sold investments that its own sales team had disparaged with a vulgarity.

“The idea that Wall Street came out of this thing just fine, thank you, is just something that just grates on people,’’ said Senator Edward E. Kaufman, Democrat of Delaware. “They think you didn’t just come out fine because it was luck. They think you guys just really gamed this thing real well.’’

But throughout a subcommittee hearing, current and former Goldman officials insisted they had done nothing to mislead clients. Time and again, the senators and the executives, among them chairman and Chief Executive Lloyd C. Blankfein, seemed to be talking past each other.

Among the Goldman retinue was Fabrice P. Tourre, a vice president who helped create and sell a mortgage investment that figures in a fraud suit the Securities and Exchange Commission filed.

In his opening remarks to the Senate Permanent Subcommittee on Investigations, Tourre declared: “I deny — categorically — the SEC’s allegation. And I will defend myself in court against this false claim.’’

Senate investigators are building on the SEC case, which accuses Goldman of defrauding investors in a transaction called Abacus 2007-AC1.

Senators highlighted the need for openness and questioned the ethics of the financial sector.

The Goldman witnesses were asked what they would change in the regulatory system.

The senators tried to put a human face on the questioning. Senator John Ensign, Republican of Nevada, said more transparency is needed “so we don’t end up hurting the little guys out there on Main Street.’’

Senator Susan M. Collins, a Maine Republican, asked repeatedly whether they felt a duty to act in the best interest of clients. Only one of the four witnesses she questioned seemed to affirm such a duty outright.

In what almost added up to a light moment, Senator Mark L. Pryor, Democrat of Arkansas, said people want to know what went wrong and “how we can fix it,’’ adding that Americans feel Wall Street contributed to the financial crisis. “Instead of Wall Street, it looks like Las Vegas.’’

Ensign said he took offense, because in Las Vegas the casinos do not manipulate odds as you play. The better analogy, he said, would be to someone playing a slot machine while the “guys in Wall Street’’ were “tweaking the odds in their favor.’’

The gap between Wall Street and Main Street was a recurring theme, with senators pointing out how much Goldman had profited as the overall economy was headed for a plunge.

The questioning put the witnesses on the defensive, with senators suggesting they were dodging questions or stalling for time.

The session began with remarks from the subcommittee chairman, Senator Carl Levin, Democrat of Michigan. The public galleries included four people dressed in mock prison jumpsuits who jeered at the Goldman officials.

“How do you live with yourself Fab?’’ one shouted at Tourre.

A tone of confrontation was set at the beginning, with Levin’s opening remarks. He said the questioning would focus on the role of investment banks in the financial crisis, and particularly on the activities of Goldman Sachs in 2007, which “contributed to the economic collapse that came full-blown the following year.’’

The hearing, Levin added, was focusing on Goldman as an “active player in building this mortgage machinery’’ for risky loans. “The question for us is one of ethics and policy: Were Goldman’s actions in 2007 appropriate, and if not, should we act to bar similar actions in the future?’’

Viniar prompted a collective gasp when Levin asked him how he felt when he learned Goldman employees had used vulgar terms to describe the poor quality of certain Goldman deals. Viniar replied: “I think that’s very unfortunate to have on e-mail.’’

Levin then berated Viniar for not saying that he was appalled that Goldman employees even thought their deals were of poor quality. Viniar later apologized.

Blankfein, Goldman’s leader, entered the chamber with an almost angry demeanor. In a brief prepared statement, he held tight to Goldman’s defenses.

Later, asked if he knew the housing market was doomed, Blankfein replied: “I think we’re not that smart.’’

Blankfein was asked repeatedly if Goldman sold securities it bet against, and whether Goldman treated clients properly.

Blankfein was grilled on the deal at the center of the SEC case. He said the investment was not designed to fail and in fact was a success, in that it conveyed “risk that people wanted to have, and in a market that’s not a failure.’’