Data show freefall may be over

Signs of recovery are growing, but jobs may lag 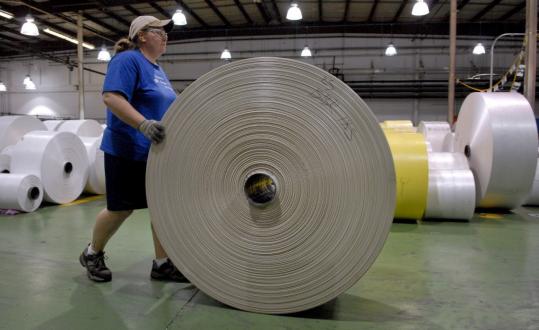 A machine operator moved a roll of plastic film to be turned into plastic bags at Hilex Poly Co. in Pennsylvania. Some economic indicators suggest the manufacturing slump may be easing. (Mike Mergen/Bloomberg News)
By Shobhana Chandra and Bob Willis Bloomberg News / June 19, 2009
Text size – +

WASHINGTON - The index of US leading economic indicators rose in May for a second consecutive month and a regional factory gauge climbed more than forecast in June, showing the worst recession in five decades may soon end.

The leading index increased 1.2 percent after a 1.1 percent gain in April, the best back-to-back performance since November-December 2001, the Conference Board reported yesterday. The Federal Reserve Bank of Philadelphia’s general economic index jumped to the highest level in nine months.

Stocks snapped a three-day losing streak, and Treasury securities fell for a second day after the reports bolstered forecasts the world’s largest economy will begin to grow in the second half of 2009. A third report showed the number of Americans receiving jobless benefits dropped for the first time since January, indicating the job market is starting to thaw.

“The freefall-type environment we saw in the first quarter is definitely behind us,’’ said Zach Pandl, an economist at Nomura Securities International Inc. Manufacturing “is turning a corner’’ and “we will exit the recession at some point toward the end of this year.’’

The leading indicators, which point to the direction of the economy over the next three to six months, were forecast to rise 1 percent, according to a Bloomberg News survey, after an originally reported increase of 1 percent in April.

Still, any recovery later this year will not be strong enough to prevent unemployment from climbing even more after reaching a 25-year high of 9.4 percent last month. President Obama in an interview this week predicted the jobless rate will climb to 10 percent, even as the “engines’’ of recovery have begun to turn.

A slowdown in factory deliveries, which signals an increase in orders, jumps in building permits and stock prices, a gain in consumer confidence, and a widening spread between long- and short-term interest rates paced the advance in the leading index.

“The recession is losing steam,’’ Ken Goldstein, an economist at the Conference Board, said. “If these trends continue, expect a slow recovery beginning before the end of the year. However, employment will take longer to turn around.’’

The Conference Board’s index of coincident indicators, a gauge of current economic activity, fell 0.2 percent, the smallest drop since October, after decreasing 0.3 percent the prior month. The index tracks payrolls, incomes, sales, and production.

In addition to gross domestic product, the measures in the coincident index are used by the National Bureau of Economic Research in determining when recessions begin and end. The private group is the accepted arbiter of US expansions.

The slump in manufacturing may be abating after companies reduced inventories in the first quarter at the fastest pace on record. Still, production cutbacks and plant closures at carmakers are likely to depress factory production in the near term.

Some factory producers are preparing for better times. U.S. Steel Corp., the largest US steelmaker by sales, is recalling nearly 800 laid-off workers to restart coke production in Ontario and a blast furnace in Illinois, union spokesmen said.

The number of people collecting unemployment insurance plunged by 148,000 in the week to June 6, the most since November 2001, to 6.69 million, the Labor Department said. The average number of initial claims over the last four weeks fell to the lowest level in four months.