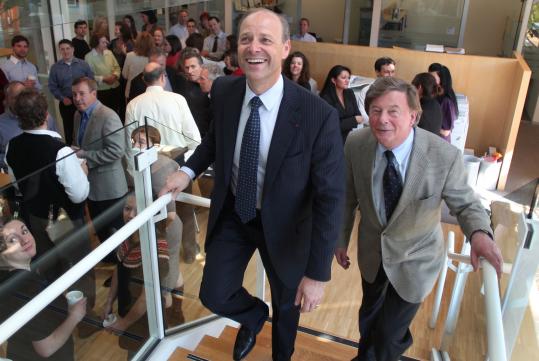 CAMBRIDGE — Henri A. Termeer, for decades the public face of Genzyme Corp., formally turned over his Kendall Square office yesterday to the chief executive of Sanofi-Aventis SA, the French drug giant that this week completed its $20.1 billion buyout of the state’s largest biotechnology company.

But while he’s out as chief executive of Genzyme — the company he built over three decades into the leading maker of drugs to treat rare diseases — Termeer says he is far from through with biotechnology.

Not content to just golf and sail off the Maine coast, where he has a vacation home, Termeer, 65, plans to devote most of his time to working on ways to advance the young field of personalized medicine, increase the number of research breakthroughs, and speed the process of getting drugs to market.

Over the next few months, he will keep working out of Genzyme’s headquarters, serving as cochairman with Sanofi’s chief, Christopher A. Viehbacher, on a transition committee intended to smooth the integration of Genzyme with its new owner. “When he’s here, he’ll have my office,’’ Termeer said of Viehbacher. “I cleaned it out for him.’’

But while he will be temporarily working out of a room adjacent to his old office, Termeer — a major Genzyme shareholder who could walk away with more than $220 million from the sale — will also be planning his next career. He wants to seed a network of nonprofit think tanks, publications, and advocacy groups in the United States and abroad to promote new biotechnology financial models that reward success in diagnosing diseases and boost the impact of drug discovery efforts.

Termeer said he was not ready to disclose details of his efforts. But rather than launch a new drug company, he said, his focus will be on helping multiple firms, scientists, and researchers build on his Genzyme legacy of creating targeted treatments for rare genetic disorders. The preferred strategy of many pharmaceutical giants — hunting for blockbuster drugs that treat common diseases — may be running its course, he said.

“It is scary how little success the large-scale pharma companies have had in recent years,’’ Termeer said, noting that the number of new drugs approved in the United States and elsewhere has steadily declined.

To reverse that tide, Termeer said, governments, private investors, and health care payers such as insurance companies must create incentives for researchers at companies, universities, and hospitals to focus on diagnostics, less common diseases, and more predictable clinical outcomes. He said his goal will be to move away from the current trial-and-error research models and dramatically increase the output of drug development efforts around the world over the next 20 years.

Termeer acknowledged that many companies and academic medical centers already are deeply involved with personalized medicine initiatives, which seek to use genetic information about individual patients to develop specialized treatments. But he said he is confident he can help fuel those efforts — and press for incentives that encourage companies to make medicines for diseases with smaller patient populations — as an independent voice outside the constraints of running a public company such as Genzyme.

His new network of organizations will be based in the Boston area but operate globally, Termeer said, noting that he relishes the opportunity to remain involved in biotechnology. “Critics will say this is a Don Quixote effort,’’ he said. “Don Quixote had a lot of fun.’’

Termeer said relinquishing the top job at Genzyme is a “bittersweet’’ experience. But he said he is optimistic about the company’s future under Sanofi, which plans to use Genzyme as its research hub for rare diseases. Sanofi will bring the financial resources of a large corporation to bear at Genzyme, said Termeer. “But our organization will have to make sure we compete effectively for that,’’ he said.

He conceded that Genzyme and Sanofi face some “unknowns,’’ as all companies do when there’s a merger. “Just the fact that you give up some of the knowns, that feels a little uncomfortable,’’ he said.

While he will walk out the door at 500 Kendall St. on June 30, Termeer said he won’t leave behind Genzyme, its employees, and the patients it has helped. “This is part of me forever,’’ he said.