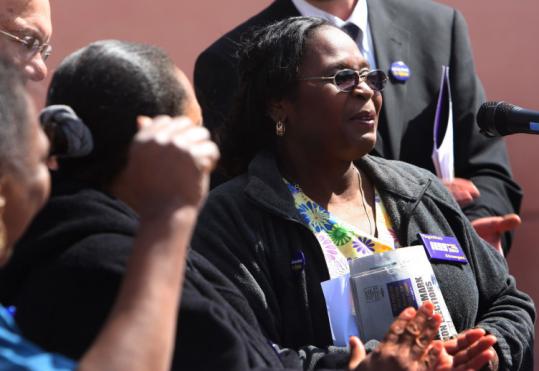 More than 800 employees at St. Elizabeth's Medical Center in Brighton will join the Service Employees International Union, the largest union victory at a Boston area hospital in about two decades.

St. Elizabeth's, the flagship of the Caritas Christi Health Care chain, is the first large Boston hospital to be organized by the SEIU, which in 2007 began a drive to unionize Boston's major hospitals. The majority of employees at area hospitals are not union members.

Mike Fadel, executive vice president of Local 1199, said, "The workers at St. Elizabeth's have shown the way" for other hospital employees his union hopes to organize. Fadel said the SEIU plans to launch campaigns at one or more other Boston hospitals next month. The union has targeted Beth Israel Deaconess Medical Center with a campaign seeking to publicize the hospital's alleged shortcomings.

"This outcome shows what workers choose if they have a free and fair election without intimidation and coercion," he said.

Caritas Christi, which operates St. Elizabeth's and five community hospitals, reached an agreement with the union in January to allow "free and fair" union elections. Under the deal, managers at Caritas Christi hospitals were restricted from lobbying workers to reject the union, while the union committed to refraining from publicly disparaging the hospitals. The hospital chain was founded by the Catholic Archdiocese of Boston and is New England's second largest.

Such agreements, which also have been embraced by hospital groups in New York and elsewhere, stem from a new union strategy of collaborating on public funding policy with union-friendly hospitals, but bringing pressure to bear through negative public relations campaigns against those that resist, said Jeff Toner, labor consultant at Dietz Associates in Kennebunk, Maine.

"Hospital organizations rely very heavily on government funding such as Medicare and Medicaid," federal programs managed by states, Toner said. "Part of the union's pitch is that it can use its political muscle to help the financial position of the healthcare providers by improving their revenue streams through state government."

Whether the union can make good on that bargain is "debatable" in the current economic downturn, Toner said.

Boston Mayor Thomas M. Menino, who supported the Caritas Christi deal with the unions, noted that healthcare and social services account for one-sixth of all jobs in Boston. "Strengthening this crucial industry in this difficult economic time is important to Boston's future," he said.

Even before this week's vote, nurses and skilled maintenance workers at St. Elizabeth's were represented by other unions. "Caritas has maintained a good relationship with labor unions over many years," said Teresa Prego, a spokeswoman for Caritas Christi in Brighton. "We expect that these good relationships will continue."

Fadel, of Local 1199, said newly unionized workers at St. Elizabeth's will be forming a bargaining committee, surveying members, and proposing a contract for hospital administrators to consider in the coming weeks. The contract proposal is coming at a time when Caritas and other hospital groups are under intense financial pressure.

"We will wait until we see the proposed contract and then respond to it," Prego said.