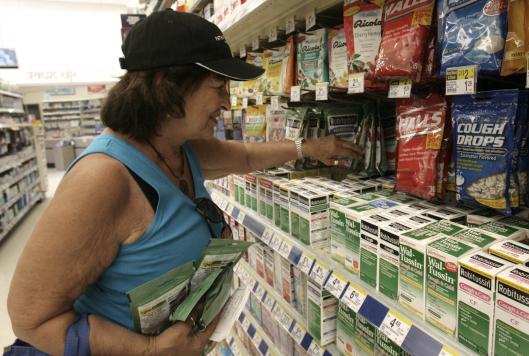 CHICAGO - A unit of CVS Caremark Corp., the largest US drugstore chain by number of stores, sued rival Walgreen Co., claiming it prematurely canceled contracts to fill prescriptions for 70,000 people.

CaremarkPCS Health LP claims Walgreen will disrupt prescription drug plans Caremark operates for employees of four companies unless it's barred by a judge's order, according to a complaint filed in Chicago federal court.

"Caremark and the tens of thousands of plan participants who depend on their Caremark-administered drug benefit to fill their prescriptions will suffer irreparable harm," the company said in court papers filed Tuesday.

Walgreen spokesman Michael Polzin said yesterday that CVS Caremark had unilaterally reduced the amount of payments it made to Walgreen for drugs covered by certain employer-sponsored plans "to a level that impacts our ability to provide a high level of pharmacy service to those plan members."

Negotiations aimed at reaching an agreement on reimbursement rates were unsuccessful, Polzin said. "We remain committed to finding a solution," he said.

Caremark has asked US District Judge Mark Filip to issue an injunction barring Walgreen from canceling the contract.