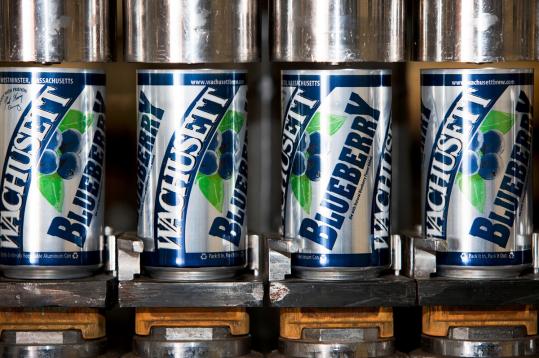 After decades building a devoted fan base for their highly refined products, craft brewers are now attempting what once seemed unthinkable, distasteful even: getting customers to drink expensive beer out of a can.

Spurred on by the success of several boutique makers, Harpoon Brewery will add its own canning facility, while Wachusett Brewing Co. is gambling there is enough business canning other brewers’ beers to justify a $1 million-plus investment in a canning line.

“When we looked into cans, we saw craft beer was heading in that direction,’’ said Wachusett president Ned LaFortune. “Canning is an incredible opportunity for us,’’ he added, and “a premier option for anyone who wants to have their beer canned.’’

Canned versions of the company’s Blueberry Ale and Green Monsta IPA are scheduled to hit store shelves in early May, and Wachusett will also can 5,000 gallons of Ipswich Ale Brewery’s popular Summer Ale, this year. And, after paying an upstate New York brewery to can seasonal versions of its Summer Beer, IPA and this summer, its UFO White, Harpoon said it will add its own canning line next year.

“If consumers buy it and they want it and there is a market for it, we will do it,’’ said Harpoon chief executive Rich Doyle.

Long associated with mass-market beer, canned brews have slowly gained acceptance among aficionados after a few boutique brewers convinced customers their artisan beers taste just as good poured out of aluminum as glass. Canned beer suffers from a perception that it tastes metallic, and is inferior to bottled beer. But industry specialists point out that since cans have a water-based liner inside, the beer never touches metal.

“The stigma is still there,’’ said Russ Phillips, who runs CraftCans.com, a website devoted to canned craft beer. But, he said, “the craft beer nerds kind of got over it,’’ and have come to appreciate the benefits of canning: The aluminum blocks harmful UV light and the canning process eliminates almost all air from the can. “The beer can even be better,’’ Phillips said.

Not everyone thinks so. No less a beer guru than Jim Koch thinks canned beer still doesn’t taste quite right. The founder and chairman of Boston Beer Co., Koch said he continues to search for a can that doesn’t impart what he feels is a metallic taste to his company’s beer.

“I have no moral problems with it,’’ said Koch of canning. “I just don’t want to compromise the taste of Sam Adams.’’

But for many consumers, cans can be more convenient to tote around, especially at outdoor venues such as the beach or golf course, than bottled beer, which is heavier. For brewers, that also means cans are cheaper to ship, and delivery trucks can hold more cans than bottles.

In Maine Baxter Brewing Co. cans or kegs its entire product line, the first in the region to not use bottles for any of its beers. “To put `better’ beer in cans is new to the region,’’ said Baxter founder Luke Livingston, who said his decision was affirmed by steadily increasing sales of his company’s beers.

“They taste absolutely amazing,’’ said Townsend, who was most surprised the beer retained complex flavors that he expected would be lost in a can.

One of the early champions of canning craft beer was Oskar Blues Brewery in Colorado. But it took New Belgium Brewing Co., the third largest independent brewer in the country, to put its craft beer in cans in 2008 to convince others such as Wachusett to follow suit.

“We really do want New England brewers to be proud of craft brews in a can,’’ said LaFortune.

So when a canning line in Bermuda that originally was used in a Coca-Cola facility hit the secondary equipment market, LaFortune jumped on it. The canner is quite robust: 800 cans a minute, compared to the one at Baxter’s that cans 28 a minute. Wachusett will run it at half-speed.

Engineers with degrees from Worcester Polytechnic Institute, Wachusett’s founders did a “museum-quality restoration on the piece,’’ LaFortune said, and have installed it in the space where they hold tastings and other gatherings so it should not interfere with the brewer’s bottling operations. LaFortune expects the canner to begin production runs in late April, and the Blueberry Ale and Green Monsta IPA will be sold in 12-packs. Wachusett will also debut a new beer in August that will be available only on draft and in cans.

The cans come custom made from Crown Beverage Container in Lawrence. And because he is on the board of the Massachusetts Brewers Guild, LaFortune has been chatting up other local area craft makers about canning their beers.

At Ipswich Ale, owner Rob Martin had a hunch that canned beer would appeal to his loyal customers, but determined it was too much work to do - until he ran into LaFortune of Wachusett.

“I wanted to be one of the first in Massachusetts to do this, not one of the latter,’’ said Martin.

For Harpoon, having a canner on site will give the brewery more flexibility to put its various seasonal beers in cans. But Doyle said he does not expect it to become a big part of business because he believes drinkers prefer bottles over the long term.

“In New England, I think it is a seasonal thing,’’ he said. “It works in the summertime.’’

But others believe it shouldn’t be too hard to convince consumers to buy more beer in a can. Livingston, from Baxter Brewing, said most American beer drinkers consider a cold draft from a keg the ultimate serving.

And, as Livingston pointed out, “A keg is nothing but a big can.’’