Bertucci’s tries to right a wrong 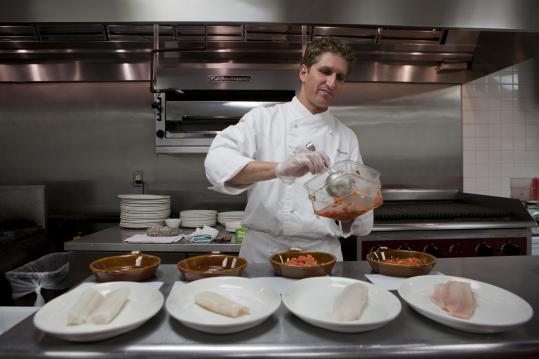 NEWTON - In the kitchen behind a blazing brick oven at Bertucci’s Italian Restaurant, executive chef Jeff Tenner poked and prodded three hunks of raw cod laid across a tray of ice.

He paid less attention to a fourth fillet, placed on the counter largely as a reminder of a mistake Tenner was trying to remedy. For nearly a year, the chain’s menu had described that fish as cod in its Baked Merluzzo dish.

But DNA testing conducted by a laboratory the Globe hired revealed it was hake, found off the shores of southern Africa. Now Tenner was on a hunt to replace it with a genuine cod that would win the approval of an executive tasting panel. It had to taste good, but also be affordable.

The story of how hake ended up as cod on the menu at 94 Bertucci’s restaurants is not unusual. A five-month Globe investigation found that nearly 50 percent of seafood samples collected from local restaurants and supermarkets had the wrong species name on menus, receipts, and in store freezers.

The $12.99 Baked Merluzzo was developed by Bertucci’s former top chef, who was inspired by a trip to Italy to replicate a Merluzzo fish dish flavored with bread crumbs, herbs, and diced tomatoes. The chain found a local Italian seafood broker to supply the Merluzzo (which means cod) and described the fillets on the menu as baby cod.

But the Bertucci’s purchasing team actually ordered cape capensis - another name for hake. No one thought it was a problem, and even the supplier, PanaPesca USA in Pembroke, didn’t intervene after a company vice president saw its hake presented as cod on the Bertucci’s menu.

Once Lloyd and other executives learned about the issue from the Globe in July, they decided to fix the mislabeling.

On an August afternoon in the kitchen at the Chestnut Hill Bertucci’s, Tenner was joined by assistant chef Mary Carman and Chris Snyder, vice president of purchasing, who had spent several weeks finding new suppliers for the cod.

Tenner ran his finger over a raw 6-ounce North Atlantic cod loin from Iceland - he didn’t like the way the flesh so easily frayed.

He found the bright white color of the 6-ounce Alaskan Pacific cod attractive, but the once-frozen fish lost an ounce of weight as it thawed. Tenner worried that it might dry out in the oven.

Another Pacific cod fillet from Alaska looked as though it might produce a silky texture when cooked because of what Tenner called its “tight cell structure.’’ But there was a problem - the supplier sold only 12-ounce fillets, twice the size of the standard Bertucci’s portion.

Next, Tenner and Carman spooned cubed tomatoes mixed with garlic, basil, and olive oil into four casserole dishes, laid the four fillets over the tomatoes, scattered bread crumbs on top, and finished them off with seasoned olive oil. Each dish was wrapped in aluminum foil and placed in the 575-degree brick oven.

Ten minutes later, Tenner took a spoonful of each dish, starting with the hake. Carman and Snyder followed suit.

Tenner preferred the taste of the 6-ounce Pacific cod, but it had shrunk to a size that customers might complain about.

By the end of the afternoon, the 12-ounce Pacific cod was the clear favorite. Tenner asked Snyder to find out how much it would cost to have the supplier cut the cod so the Bertucci’s kitchen staff would not have to do the work.

Three days later, Tenner presented all four fish - raw and cooked - to a panel of company officials at the Bertucci’s in Westborough. Four senior executives - including Lloyd - tasted each sample.

“The lesson we learned from all of this is we need to be a little more careful and scientifically precise,’’ said Skip Weldon, a marketing executive who participated in the taste test.

The executives agreed with Tenner - the 12-ounce Pacific cod from Boston’s North Coast Seafoods was superior to the other three offerings. To save money, Bertucci’s would cut the fillets in-house.

By early last month, the new fish was being used to make Baked Merluzzo. And this real cod has the same $12.99 price as before.

“We expended a lot of time and energy and dropped other projects to make this a priority to figure out what was going on,’’ Lloyd said. “We took it very seriously. And we went with what we considered to be the best alternative.’’

On the menu, but
not on your plate

Here are some examples of mislabeled fish from our investigation.
The Globe investigation
Your comment is subject to the rules of our Posting Policy
This comment may appear on your public profile. Public Profile FAQ