Air-rights projects on tap, as is renewed controversy 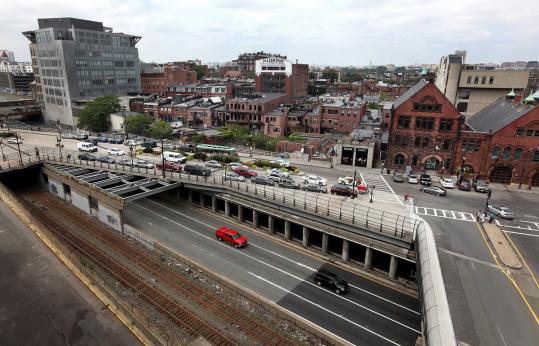 Parcel 15 is on Boylston Street over the Massachusetts Turnpike. Projects that were shelved for the economic recession have been reopened. (Pat Greenhouse/ Globe Staff)
By Steve Holt Globe Correspondent / July 27, 2011

The triangular parcel along Boylston Street has always been such a void that it’s easy not to see: a hole in the street that exposes steel and concrete infrastructure and conducts the roar of traffic from the highway below.

The site’s peculiar challenges and the difficulty of developing real estate in Boston have combined to stymie improvement of one of Boston’s most prominent crossroads, where the Fenway and the Back Bay meet along the busy spine of Massachusetts Avenue.

The state is trying to breathe new life into this and several adjoining locations over the Massachusetts Turnpike, by reviving the process to award air rights for projects that would close in those open scars - a process shelved several years ago because of the recession.

“It seems like the time to turn our attention back to this,’’ said Peter O’Connor, head of real estate for the Massachusetts Department of Transportation. “It feels like a place that is crying out for a little bit of redevelopment. Getting some of these projects done there is going to really help that area achieve its potential.’’

The department is dusting off submissions that transportation authorities received in 2008 to redevelop the Boylston Street property, known as Parcel 13, and several others in that corridor.

One important recent step was the finalizing of a Citizens Advisory Committee, appointed by Mayor Thomas M. Menino, that will vet proposals for each of the four sites for their effect on the surrounding neighborhoods. The Boston Redevelopment Authority has instructed the committee to start by reviewing the lone proposal for Parcel 13, submitted by Trinity Financial and its partner in the venture, Boston Architectural College.

The other parcels include two smaller properties across Boylston Street that slope toward Dalton Street, and a larger one on the other side of Massachusetts Avenue that covers the turnpike from Boylston to Newbury streets.

But the relaunched effort will face tough going: Community opposition is a given, and a lengthy public review will still be required.

And there is the specter of the failed Columbus Center project looming over any turnpike development plan. The mega-mixed-used complex, which would have straddled the turnpike about a half-mile east of Parcel 13, became so expensive to build that its developers gave up.

And constructing a deck over a highway to support big new buildings is difficult and expensive. So Fritz Casselman, a member of the Citizens Advisory Committee, approaches his review of the first of the new proposals, that for Parcel 13, with a question nagging at him: Is it really going to happen?

“Are we looking at another Columbus Center?’’ Casselman asked. “Nobody wants that. I don’t think that will ever happen.’’

The plan for Parcel 13 calls for dormitory space, classrooms, and offices for the Boston Architectural College, as well as retail and rental apartments. The mixed-use building would extend over the turnpike from the Massachusetts Avenue end east down Boylston Street, about a half block.

Trinity’s project manager, Kenan Bigby, said the development would reopen a long-closed second entrance to the MBTA’s Green Line at Hynes Convention Center and make the station accessible to the handicapped.

Ted Landsmark, Boston Architectural College’s president, said school officials were “enthusiastic from the start’’ after seeing how Trinity’s plans would allow the institution to expand. The school is around the corner from the site, on Newbury Street.

“The additional space in the building that we would be able to utilize for shared student purposes was viewed as a significant enhancement to our ability to support our students,’’ Landsmark said, adding that students have worked on designs for spaces inside and outside the proposed building.

A retired teacher and Fenway resident, Warren Cutler, walks past the Boylston Street site daily. He said that while the Trinity-Boston Architectural College project won’t affect him personally, he anticipates it will cause some problems at one of the city’s busiest intersections.

“There’s going to be a lot of building around, and it’s going to affect car traffic,’’ Cutler said. “That corner is heavily trafficked by pedestrians and cars. It will have an effect.’’

But Trinity said it has received letters of support from community groups.

Bigby, the project manager, said that pending approval, Trinity aims to break ground by spring. “We think we’ve lined the project up that we can achieve those goals, and we’ll just have to continue to work with the city and state and community to get to that point,’’ Bigby said. “We think the project is positioned in such a way that those are achievable dates.’’

Development of the other three MassPike parcels - for which Chiofaro Co., Carpenter & Co., and a team including Weiner Ventures and ADG Scotia LLC had submitted proposals - will probably take longer, as agencies and community groups narrow down competing proposals. These plans include a 200-room hotel, a 500-unit residential building, and an office complex of more than a half-million square feet.

Individually, each project is sure to create issues with neighbors and others; collectively, four big developments in the span of a half-mile would probably raise a big question: Is this too much construction at once?

O’Connor said that as the owner of the property the Transportation Department is not in a position to control when everything gets built over the highway. That is up to regulators and members of the community, through the Citizens Advisory Committee, he said.

Their challenge, O’Connor added, can be reduced to a single question:

These eyesores and empty properties exist across the city.