In Roxbury, $2.8m restoration of historic mansion to get underway 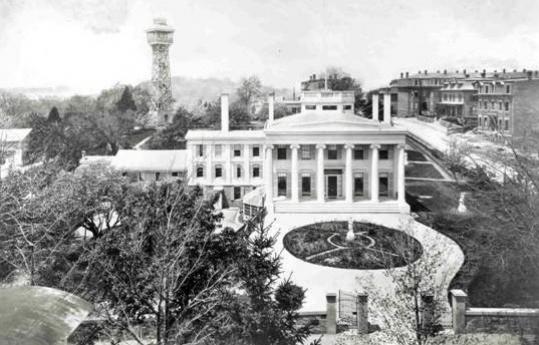 The Alvah Kittredge House in the 1880s. Built in 1836 on the site of a Revolutionary War fort, the house once symbolized Boston’s growth. (Historic Boston Inc.)
By Casey Ross Globe Staff / July 16, 2011

In its heyday, the mansion in Roxbury Highlands was a symbol of Boston’s growth following the American Revolution, a time when prosperity was washing across the city like a flash flood.

With his furniture business, Alvah Kittredge built the grand Greek revival home in 1836, establishing a neighborhood that attracted the likes of abolitionist William Lloyd Garrison and author Edward Everett Hale.

But over the ensuing decades, as Roxbury developed from a suburb into a teeming section of the city, the massive home on Linwood Street was forgotten - left to deteriorate into an amorphous white block with peeling paint and rotting columns.

Starting Monday, however, the home and its history will be the subject of $2.8 million restoration project that will result in apartments for five families at a property still very much rooted in its proud, if faded, past.

“We all know this is a beautiful and important house,’’ said Celia Grant, who has lived in the neighborhood, situated near Eliot Square, for 12 years. “It’s crying out to be lived in, and for a long time it’s been crying out to be saved.’’

The restoration is being spearheaded by Historic Boston Inc., a nonprofit group that preserves culturally significant buildings in neighborhoods across the city. On Monday the organization will host an open house, to be attended by Boston Mayor Thomas M. Menino, whose administration took the property by eminent domain after its prior owner let it fall into disrepair.

“This is a historic part of our city, and we have to restore it,’’ Menino said, adding that his administration is working with residents to rebuild the nearby Alvah Kittredge Park. “You can build new sections of the city, but they won’t have the integrity that makes Boston what it is.’’

Historic Boston, which in August is moving its offices to the nearby Eustis Street Fire House, plans to divide the 6,400-square-foot home into five residential units, two of which will be designated as affordable housing. Because it is using state and federal tax credits for the project, the organization must rent the units for five years before it puts them up for sale. The renovations are scheduled to start next spring.

Kathy Kottaridis, Historic Boston’s executive director, said the home - one of the few remaining high-style Greek revivals left in the city - will require extensive structural repairs as well as painstaking work to restore its intricate millwork and other finishes.

“We want to show the rest of the world that this is a house that matters to Roxbury and this neighborhood,’’ said Kottaridis. “Even though Roxbury is dense and filled in, you can still go down these tree-lined streets and see wonderful examples of architecture from this period.’’

The story of the Kittredge house - built on the site of a fort used in the Revolutionary War - also tells of the broader evolution of Roxbury from a suburban outgrowth of Boston to an urban neighborhood with tightly packed residential areas and commercial squares.

At the beginning of the 20th century, the house was moved by its then-owner to a different part of the 2-acre property. Its wide front steps were removed, and a large wing was excised, so it now appears more compact than its original, sweeping design.

As the years passed, the neighborhood around the home was increasingly filled in with row houses and other homes, contracting its once wide open spaces into more intimate city blocks.

In the 1970s, the Kittredge house became host to the Roxbury Action Program, a social services group that advocated for affordable housing and provided job training and other support for the African-American community. The program kept the property vibrant, but in the ensuing years its condition began to deteriorate more rapidly.

Chris McCarthy, who lives around the corner from the house, said the restoration will restore a piece of history that seemed to be slipping away.

“You could see it was deteriorating further with every elapsing year, but no one knew what to do about it,’’ he said. “What Historic Boston is doing is extraordinary. It’s a huge gift to the neighborhood, and it’s long overdue.’’