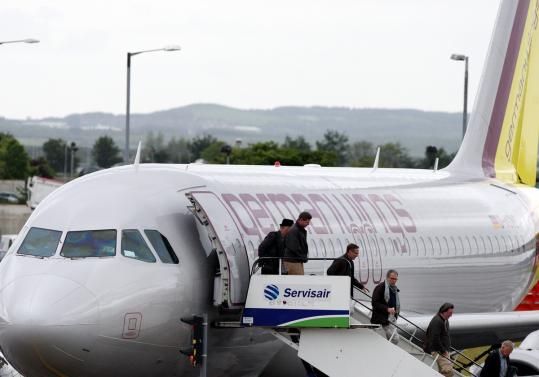 Passengers left a Germanwings aircraft that had just landed in Edinburgh yesterday. Hundreds of flights were canceled on Tuesday as winds blew the cloud of ash from the Grimsvotn volcano over Scotland and other parts of Europe. (Scott Heppell/Associated Press)
By Nicola Clark and David Jolly New York Times / May 26, 2011

PARIS — A dense cloud of volcanic ash that forced the brief morning closings of airports in Berlin and other German cities blew farther east yesterday, allowing most commercial air traffic to resume as the second major eruption of an Icelandic volcano in two years appeared to be sputtering to an end. But officials warned that winds could still blow some of the densest part of the plume back over Britain and northern France at the end of the week, possibly leading to fresh travel disruptions.

Eurocontrol, the Brussels-based agency that coordinates air traffic management across the region, estimated that fewer than 1,000 flights had be canceled yesterday — a small fraction of the roughly 29,000 scheduled flights.

But Lufthansa, Germany’s largest airline, said that while its Berlin, Hamburg, and Bremen flights had resumed, many were still facing significant delays. Passengers expecting to travel to or from those airports yesterday were advised to contact the airline before heading to the airport. Lufthansa said it planned to operate a normal schedule today.

Iceland’s Met Office weather agency said that the eruption of the Grimsvotn volcano had “paused’’ in the early hours yesterday and observers said the crater was now emitting only a small puff of steam.

“The worst is over,’’ Iceland’s prime minister, Johanna Sigurdardottir, said in a statement. “Our geoscientists say that the eruption is waning day by day.’’

Kyla Evans, a Eurocontrol spokeswoman, said air traffic controllers expected few if any disruptions within the next 24 hours but noted that if current weather patterns held, further flight cancellations could be in store.

The latest forecast maps from the Volcanic Ash Advisory Center of the Met Office, the British weather service, showed the plume over Germany dissipating entirely by early evening. The highest concentrations of ash on were limited to Arctic regions.

“There’s a large chunk of ash that, right now, is way up in the north,’’ Evans said. “It’s possible that could start to blow back down over the UK and the north of France by Friday’’ before dissipating.

That ash was likely to remain at relatively high elevations, however, which could mean that flights would still be permitted at lower altitudes.

Airports in Berlin, Hamburg, and Bremen, in northern Germany, were closed for between three and four hours yesterday. Air traffic in Britain had returned to normal as of yesterday morning.