840 acres will be linked to forest 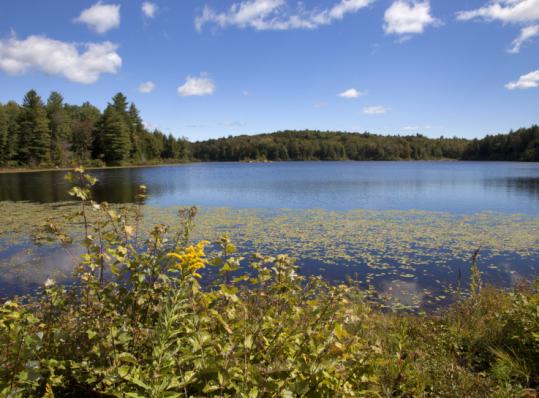 The Twining Lake property in Tolland includes more than 840 acres of undeveloped forest. It will be linked to a state forest. (Ellen Harasimowicz for The Boston Globe)
By Casey Ross Globe Staff / May 6, 2011

The state has bought more than 840 acres of land in the foothills of the Berkshires, a deal that will create one of the largest swaths of outdoor recreation space in Massachusetts.

Officials in Governor Deval Patrick’s administration said yesterday that the state will pay $3 million to acquire the undeveloped property.

Its owners had put it on the block last year and attracted interest from private parties such as religious groups, recreational-based companies, and wealthy families looking to build large estates.

The mix of forests, fields, lake, and streams — the largest piece of property for sale in Massachusetts — is located in the town of Tolland, near the border with Connecticut. The purchase will allow the state to link the land to the nearby Tolland State Forest, forming a 5,000-acre preserve.

“It’s a unique piece of property and a very important purchase for us,’’ said Richard K. Sullivan Jr., Patrick’s secretary of energy and environmental affairs. “The area is rich with forests and wildlife habitat, and keeping the space unfragmented allows that wildlife to migrate.’’

Sullivan said the property will be under the control of the state Department of Conservation and Recreation, which will hold a series of hearings to seek public views on how to manage it.

Once it is linked with Tolland State Forest, the park will be the 15th-largest in Massachusetts and contain one of the state’s few remaining lakes with an undeveloped shoreline. It also contains a half-mile section of the Farmington River.

Town records in Tolland list the owner as Twining Lake Properties Inc., whose president is Jerome Finkelstein, of Long Island City, N.Y. Finkelstein could not be reached for comment yesterday.

Twining Lake put the property up for auction last fall and had received offers from individuals and businesses looking to build homes or campgrounds. One bid came from a company that wanted to establish it as a wilderness retreat, according to broker Jeremy Freid, who declined to identify the bidders.

“In the end, selling it to the state and turning it into park became a compelling choice for the sellers,’’ said Freid, a principal of Great Rock Real Estate in Boston, which specializes in selling unique and hard-to-value properties. “It’s just a spectacular piece of property.’’

The state bought the Tolland property for significantly less than the initial asking price. Patrick administration officials said the sellers initially estimated the property’s value to be more than $5 million, but they eventually settled on a $3 million price. The sale was finalized Wednesday.

In a statement, Patrick noted that the state got a prize property at a good price.

“In pursuing this opportunity, the Commonwealth turned an economic downturn to its advantage, preserving a beautiful forest at a great price to taxpayers, while increasing the conservation legacy we are leaving for future generations,’’ the governor said.

The Patrick administration spends about $50 million annually on conservation land. With more than 1.2 million acres now protected as open space, Patrick officials said it was the first time ever that conservation land exceeded the amount of developed land.

Freid said establishing a true market value for the land was difficult because it is so unusual and isolated: properties of more than 200 acres rarely come on the market. And this one is about an hour’s drive from Westfield on curvy country roads through thousands of acres of unspoiled forest. Its nearest neighbors are a Girl Scouts camp and a century-old hunting club. At one point, the owners had plans to build dozens of houses around the 125-acre Twining Lake, but the project never moved forward.

The acquisition ranks among the state’s largest land purchases in recent years. In 2007, state officials joined with the Massachusetts Audubon Society to purchase 900 acres in nearby Sandisfield for $5.2 million, in order to expand Otis State Forest. The state also acquired an 883-acre parcel in Fitchburg in 2008.

The property in Tolland includes existing nature trails that provide access to the pond for kayakers and canoeists as well as to hilltops covered with a variety of hardwoods, pine and hemlock. It also contains several streams and a section of the Farmington River, a fast-flowing, rocky-bottomed river known for its good trout fishing and wildlife, such as the peregrine falcon. The area is also home to black bears, moose, and whitetail deer.

“It’s a great thing the state is purchasing this land,’’ said Eric Munson Jr., chairman of the town’s Board of Selectmen. He said the town could have used tax revenue from development of the property, but that it would have been difficult to see the forests cut up to make room for wealthy visitors.

“I’m glad we won’t see a bunch of houses built up around us,’’ Munson said. “We could still use some wilderness.’’