20% down on homes may soon be norm

Aim is to prevent another crisis 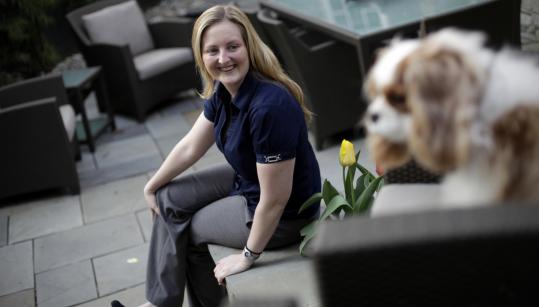 Julia Ziegler said to make a 20 percent down payment on the house she wants to buy, “I would have to save for a long, long time.’’ (Juana Arias/The Washington Post)
By Dina ElBoghdady and Zachary A. Goldfarb Washington Post / April 11, 2011

WASHINGTON — Most home buyers put down less than 20 percent when they take out a mortgage, a sign of how hard it has become to scrape together enough cash to purchase a house.

Seeking to avoid a repeat of the foreclosure crisis, the Obama administration and regulators have proposed rules that are all but certain to boost the interest rates and fees on many low-down-payment loans. Only borrowers putting down 20 percent could get the best deals.

It takes the average middle-class family 14 years to save that much money and closing costs, according to the Center for Responsible Lending. That’s a steep hurdle, though 20 percent down was a common standard for most of an earlier generation.

Even with help from her parents, Julia Ziegler, 29, a social media specialist, would have to put down less than 20 percent on the $250,000 condominium she wants to buy in Washington.

The federal proposal’s impact would extend beyond first-timers such as Ziegler to repeat buyers, who generally have counted on equity built up in one house to provide the down payment for the next.

Consumer activists and housing industry executives warn that the proposed rules would make homeownership much harder to achieve, particularly for first-time buyers and minorities, who have relied in great numbers on low-down-payment loans.

“Renters, by and large, have very little cash on hand, and minority renters have even less,’’ said Barry Zigas, housing policy director at the Consumer Federation of America. “Raising down-payment barriers to a level that history tells us is neither necessary nor appropriate will foreclose homeownership opportunities for millions of families.’’

In a recent report to Congress on the future of housing finance, the Obama administration said it was still committed to ensuring that Americans of modest means can buy houses. Although officials say they support some form of down payment assistance, they have yet to offer many specifics.

Before the Great Depression, home buyers were often required to put down 50 percent or more. But after the Depression and World War II, the government sought to stimulate the housing market and make it easy for veterans — and later all Americans — to buy houses by dramatically lowering down-payment requirements. Buyers could put down 5 percent or less on loans offered through the Federal Housing Administration or other government agencies.

About 1980, the norm for down payments settled at 20 percent, but low-down-payment loans continued to be available for borrowers who met relatively strict criteria.

As home prices soared at the start of the last decade, banks began to offer a new breed of low-down-payment — or no-down-payment — loans to a far wider range of borrowers, including many who were poor credit risks. Those mortgages were often linked to other risky lending practices, which contributed to the housing crisis.

“If people had put 20 percent down in 2005, if the law required it, the crisis would have been a lot milder than it turned out to be,’’ said Paul Willen, a senior economist at the Federal Reserve Bank of Boston.

Government officials now see raising down payments as a way to curtail shoddy and dishonest lending and to limit foreclosures if home prices decline. Under the standards proposed last month, a mortgage with a 20 percent down payment is deemed safe. In the case of mortgages with smaller down payments, banks would have to hold a stake in those loans rather than sell them off, a costly requirement that banks say would be passed on to borrowers in the form of higher interest rates and fees.

Some low-down-payment loans would still be available without the higher rates and fees through federal programs such as those offered by Fannie Mae, Freddie Mac, and the FHA. But the administration has said it wants to eliminate Fannie and Freddie eventually and to shrink the FHA’s role. Any changes could take several years before the impact is fully felt.

Even federal officials proposing the standard acknowledge that many creditworthy borrowers would have trouble coming up with 20 percent. In seeking public comment, regulators asked whether the level should be set at 10 percent, instead.