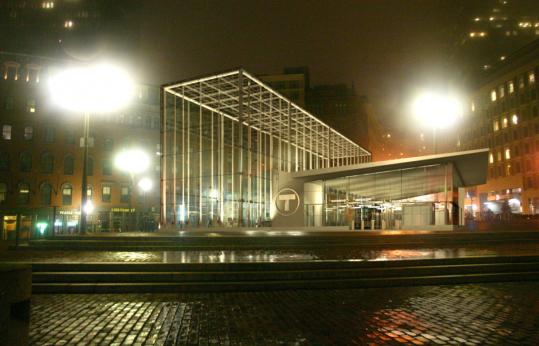 The Boston Redevelopment Authority and its consultants propose a complete overhaul of City Hall Plaza, with work being done in stages over several years. (HDR and Chan Krieger Sieniewicz Inc.)
By Casey Ross Globe Staff / March 16, 2011

The transformation of Boston’s City Hall Plaza is supposed to take shape before you even know it’s happening.

Next year, the plaza’s bunker-like subway station will be replaced with a sleek glass structure. Then, trees will start to appear along Cambridge Street and in the plaza itself. Eventually, they will frame a new amphitheater for concerts, theater performances, and special events.

Within 10 years, the nine-acre plaza will scarcely resemble the barren expanse of red brick so many Bostonians have come to detest.

That’s the new strategy being pursued by city planners, who said they are finished with grandiose, all-in-one plans to revitalize the plaza. No longer will they entertain sweeping proposals for a baseball diamond, fountains, vegetable gardens, or a grand hotel and retail complex — all actual ideas from the past. A slower, step-by-step approach, they said, is the only way to fix a dysfunctional civic space that has rejected decades of efforts to improve it.

“The problem with all the previous proposals is that they all tried to fix the plaza with one big idea,’’ said Kairos Shen, chief planner with the Boston Redevelopment Authority. “This approach will allow us to gradually make changes over time that will create something really transformative.’’

The specific plans are being generated in meetings hosted by Utile Inc., a Boston architectural firm that won a $54,000 grant from the Environmental Protection Agency to redesign the plaza to be greener, and with more usable public space. The next meeting is planned for early next month, though a date has not been set.

So far, the work has produced a pair of rough designs, each organized around the concept of adding bands of trees to create shade and smaller, more intimate gathering spaces.

“The idea is to give the plaza structure and create different scales of experience,’’ said Tim Love, a principal of Utile. “An important question to ask here is, ‘What can this space do well that doesn’t work on Boston Common or the [Rose Fitzgerald Kennedy] Greenway?’ ’’

For much of the year, the plaza is a dead zone between the two, with only occasional festivals and annual visits by the Big Apple Circus.

In his research, Love found some early designs that resemble the current proposal. A 1961 plan by I.M. Pei & Partners called for a lawn with a series of pathways through the plaza. An earlier effort called for a much wider, more gradual staircase rising from Faneuil Hall to the plaza.

A key aspect of the current design calls for smoothing out the slope between Cambridge and Congress streets, where visitors encounter multiple sets of stairs that make the plaza harder to traverse and close off spaces that could be used for cafe tables or small events.

Utile is developing the plan with the landscape architecture firm Reed Hilderbrand, a Watertown company that has worked on designs for the Greenway, the Arnold Arboretum, and the Christian Science Plaza.

“We don’t envision creating a garden here. The plaza still has to be urban,’’ said Eric Kramer, a senior associate with the firm. “But we have to find ways to make the pervasive paved surface more accessible in a way that can still manage crowds and allow trees to thrive.’’

Instead of traditional tree boxes, the firm is working on a design to place large amounts of soil under the brick to allow for dozens of new trees. The exact number of trees has not been determined, but they would be arranged to form a central gathering space about the size of the Hatch Shell on the Charles River Esplanade.

A smaller opening would be created closer to Congress Street, where officials are thinking of placing a bike storage and rental facility.

Officials said the transformation of the plaza will begin with a pair of projects scheduled to begin in 2012.

One is the effort to redesign the main entrance to City Hall and improve its accessibility to the disabled.

The other is a $72 million project to replace the MBTA’s bunker-like station at Government Center. That project would include changes to the edge of the plaza along Cambridge Street, where officials want to plant additional trees and create a wider crosswalk, similar to the one at Harvard Square Station.

Shen said those two projects will allow the city to revamp the plaza over several years. He said the approach is one that worked well at Fenway Park, where former architect Janet Marie Smith spent years remolding the ballpark with an array of renovations.

“And that’s what we want to do in City Hall Plaza. After several phases of work, we’ll end up with a completely different place, but it will be like you didn’t know it was happening.’’

City Hall Plaza
— past and future