US finds Toyota electronics weren’t to blame in crashes 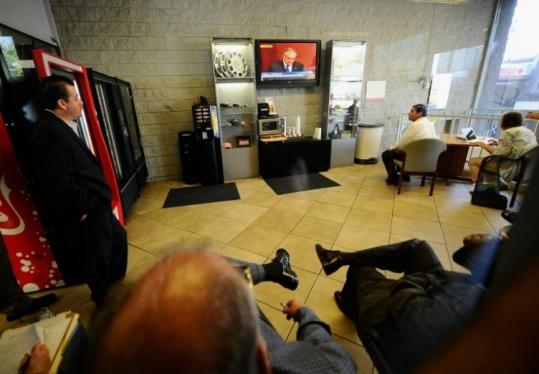 The government’s 10-month study on safety problems in Toyota cars found no flaw in the vehicles’ computer control systems that would account for reports of sudden acceleration and other issues that led the Japanese automaker to recall millions of its vehicles.

The study, requested last year by Congress, represents a major relief for Toyota Motor Corp., which has contended that its recall problems were the result of relatively minor mechanical issues — which Toyota has fixed — rather than fundamental flaws in its vehicles’ electronic operating systems. Such flaws probably would have required Toyota to overhaul the software for its cars — a potentially complicated and costly fix. The study was also a relief for local Toyota dealers, who lost business as the recalls damaged a brand name long know for reliability.

“We are not the powerhouse that we were prior to the recalls,’’ said Robert Boch, owner of Expressway Toyota in Boston, “but this will certainly be a step in the right direction.’’

But for New England families who lost loved ones in possible sudden-acceleration accidents, the study left their questions unanswered. They were generally skeptical of the findings because the acceleration problems in the cars seemed more serious than to have been caused by a relatively minor mechanical glitch.

“Maybe they just haven’t found the right problem,’’ said Colleen Krause of Keene, N.H., whose husband, Stephen, was killed in 2009 when his car collided with an out-of-control Toyota Highlander driven by Harvard professor Stephen Lagakos. Lagakos and his two passengers, his wife and mother, also died.

Added Krause: “At this point I’m beginning to doubt that we’ll ever find closure.’’

Toyota came under scrutiny in late 2009, plagued by allegations that its vehicles could accelerate unexpectedly. It recalled millions of vehicles, saying that gas pedals could stick or floor mats might jam the accelerator. But others questioned whether the problems went deeper: Congress ordered a review to determine if Toyotas had a glitch in their electronic control systems.

The study, done with the help of NASA engineers, validated Toyota’s claims.

“We enlisted the best and the brightest engineers to study Toyota’s electronic systems, and the verdict is in,’’ Transportation Secretary Ray LaHood said yesterday. “There is no electronic-based cause for unintended high-speed acceleration in Toyotas.’’

Toyota has already paid the US government a record $48.8 million for its handling of the safety recalls, which critics say did not come quickly enough. A representative for the automaker said yesterday that the company hopes the government report will finally allay “unsupported speculation’’ about Toyota’s electronic control systems.

“We believe this rigorous scientific analysis by some of America’s foremost engineers should further reinforce confidence in the safety of Toyota and Lexus vehicles,’’ Steve St. Angelo, Toyota’s chief quality officer for North America, said in a statement.

NASA engineers tested nine vehicles involved in acceleration complaints and examined more than 280,000 lines of software code. To prevent future cases of unintended acceleration, transportation officials said yesterday that they will consider adopting new rules to require systems in passenger vehicles that allow drivers to brake a car even if the accelerator is depressed, as well as event data recorders to allow investigators to better determine the cause of crashes.

Transportation officials said they also may research the reliability and security of electronic control systems, as well as look into the improving pedal placement and design in cars.

Joan Claybrook, who headed the National Highway Traffic Safety Administration during Jimmy Carter’s presidency, said she questions whether the NASA-aided examination was as exhaustive as it could have been.

“I don’t know that NASA has ever previously reviewed problems with industrial design before, or is aware of the top of the standards and the bottom of the standards for these kinds of [software] codes,’’ she said. The traffic agency’s consideration of mandatory brake override systems “suggests that they know there’s a problem,’’ Claybrook added.

Although the government’s study exonerates Toyota of any electronic issues, it will probably take several years for the company to recover its reputation, said Philip Gott, an auto industry analyst at IHS Global Insight, a Lexington forecasting firm. Even so, Gott said, customers “are already beginning to come back’’ and may now be more loyal to the brand because no electronic defect was found.

But families of those involved in fatal crashes suspected of being caused by sudden acceleration say they will continue to look for answers. That includes Leonard Rubin’s son-in-law, Marvin Cohen, who says he cannot believe that Rubin’s driving caused the parking lot accident that killed an elderly woman in Florida in 2004. Rubin, who has since died, was exiting a parking space when his Camry shot back, hitting the woman.

“We still believe that it was not Mr. Rubin’s fault,’’ Cohen said. “I still feel it was the Toyota.’’