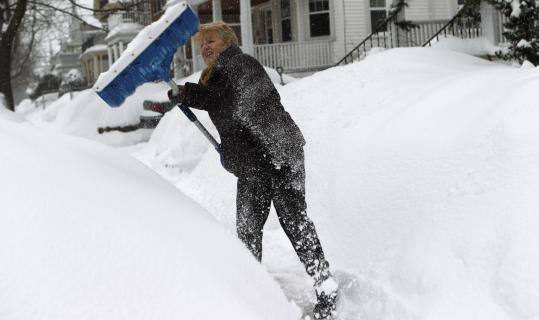 Diane Dalpe, shoveling snow in front of her home-based photography studio in Arlington, has booked two vacations in sunnier climes, saying, “I want to wake up and it to be spring out.’’ (Joanne Rathe/Globe Staff)
By Jenn Abelson and Patricia Borns Globe Staff | Globe Correspondent / February 2, 2011

Diane Dalpe’s survival plan for the rest of the winter: flee.

The Arlington photographer has planned two vacations — each booked after recent snowstorms — to Florida and Louisiana to fill her desperate need for sunshine and warm weather.

“We are very hardy in New England, but you reach a point. I just can’t take it anymore,’’ said Dalpe, who is closing her studio for about three weeks for the first time during the busy winter. “I want to wake up and it to be spring out. The only way to do that is to stay out of town as much as possible.’’

Dalpe is among the legions of New Englanders plotting last-minute escapes from the seemingly endless snow. Travel agents across the region are reporting a significant spike in sales since Christmas — far beyond the usual bookings for winter break. In recent weeks, consumers reserved 50 percent more trips to Mexico and the Caribbean through TNT Vacations compared with the same period last year. Durgan Travel Service is seeing a similar boost in business for top destinations, including cruises to the Caribbean and packages to Hawaii and the Bahamas, where hotels are offering deals to get the attention of winter-weary New Englanders.

“One storm doesn’t do it. But the fact that these are back-to-back-to-back-to-back is enormous for our business,’’ said Tom Diffily, vice president of TNT Vacations. “It also helps that people have more spending money and are not as worried about job losses as they were one year ago. It’s fast and furious here.’’

For some, the typical hot spots in Mexico and the Caribbean simply are not far enough south this season.

When the December blizzard stranded Alexa Mills in Massachusetts, she and her boyfriend made an uncharacteristic move: They ditched their annual ski trip and bought $300 plane tickets for a four-day vacation to Colombia in February.

“After that huge snowstorm, I was down in the dumps. I couldn’t even get out of Boston,’’ Mills said. “The worst for me with the snowstorm is that the wardrobe options are really limited. Thank god I can wear a sun dress in two weeks. That will help me get through having to wear these flannel-lined pants during the storms.’’

Alison Nolan managed to skip one storm in January because her flight back from sunny St. Lucia was canceled. But the reprieve was short-lived. Returning to frigid temperatures and a driveway full of snow in Melrose left her yearning for another retreat. When a friend recently invited her on a Mediterranean cruise in April, Nolan pounced on the offer. She spent yesterday reviewing the itinerary for her 10-day trip through Italy, France, Greece, and Croatia.

“Typically, I don’t even take one vacation during the winter,’’ Nolan. “But I jumped on the invitation because I needed something to look forward to.’’

For New Englanders watching the blustery weather from warm destinations abroad, life couldn’t get much better.

“Every day starts with a glass of fresh-squeezed orange juice or a slice of fresh mango,’’ said Richard Katz of Maine from the Ocean Club Resorts in Turks and Caicos. “I just had a delicious lunch on an ocean deck surrounded by palm trees with a view of the sailboats on Grace Bay. How can a day be less than perfect?’’

Even the travel agents are trying to high tail it out of Boston. But for some, the business is too good to pass up.

“This is not a time for me to abandon ship,’’ said Robert Malmberg, president of Malmberg Travel, which saw a 20 percent increase in sales in January.

Annette Kent, retail sales and operations manager at Durgan Travel Service in Stoneham, took a cruise in December but hardly remembers it now. She just booked a vacation to Disney World in March, but would prefer to leave today if possible.

“Just like everyone else, I want out,’’ she said. “I would like to get out sooner but we are just too busy here to be able to do that.’’

Patricia Borns is a frequent contributor to the Globe. Jenn Abelson can be reached at abelson@globe.com.