THIS STORY HAS BEEN FORMATTED FOR EASY PRINTING
CAREER MAKEOVER 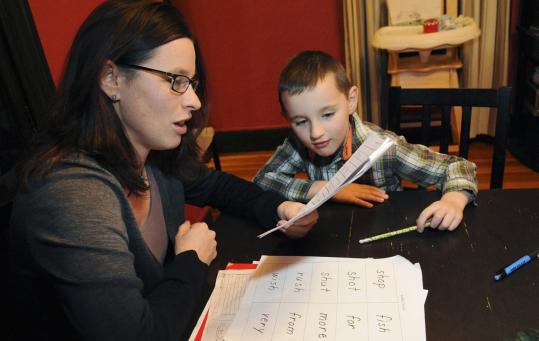 Lisa Mozden Romaniw helped her son, Kaden, 6, with his homework on a recent afternoon. She relocated from Los Angeles to the Boston area six years ago and has been looking to break into the film and video editing industry here. (Lisa Poole for The Boston Globe)
By Cindy Atoji Keene Globe Correspondent / January 23, 2011

When film editor Lisa Mozden Romaniw moved to Boston from Los Angeles six years ago to raise a family, she had high hopes for staying in the film industry. Even though the Hub isn’t Hollywood, tax breaks have lured movies such as “The Social Network,’’ “The Fighter,’’ and “The Town’’ to Massachusetts.

With small independent film production companies setting up shop in the state, Romaniw figured that her experience editing everything from Dracula movies to programs for the Discovery Channel would easily transfer to television, documentary films, and commercials.

Three years ago, she landed a position on the movie “Ghosts of Girlfriends Past,’’ which was filmed in Boston, but hasn’t found any film work since.

The 40-year-old Winthrop resident said she believes she has lost out on jobs because she is viewed as overqualified. But little do interviewers know, she said: “I would do anything just to be working now. I don’t need to be an editor on the next Brad Pitt movie — I moved out of LA for a reason.’’

When Romaniw applied for a Boston Globe Career Makeover, she wanted some advice on selling herself. Patricia Hunt Sinacole, chief executive of First Beacon Group, a human resources consulting firm in Hopkinton, and a regular Globe contributor, recommended that Romaniw practice a clear response to suggestions that she is overqualified: “If I weren’t willing to do the work, I wouldn’t be applying for the job.’’ Romaniw should then reassure the hiring manager that the salary isn’t too low, she understands what the role entails, and she would remain in the position as a dedicated employee, Sinacole said.

Next: the resume. Romaniw’s resume follows a typical film editor’s format, listing the name of the project, technology used, and director’s name. “This might work on the West Coast — but maybe not in New England,’’ said Sinacole. She recommended the more traditional approach of listing technical proficiencies such as Avid or Final Cut Pro, two widely used film and video editing tools, as well as more detailed descriptions of responsibilities, such as “effective at organizing and coordinating shots.’’

As far as making connections that might lead to jobs, one social networking site gaining traction is Meetup.com, a good resource for people looking to find others interested in specific activities, industries, and careers, Sinacole said. Romaniw could also use Twitter to follow film production companies. In addition, Twitter has entertainment industry sites — a good resource for instantly updated information about the movie industry.

Finally, Sinacole recommended that Romaniw check out the many websites that list freelance opportunities, such as Elance.com, odesk.com, or Freelancer.com. “Flexibility is the name of the game in this economy,’’ Sinacole told Romaniw. “I believe you have what it takes to stay in the game as a film editor. With a little persistence and the right connections, the word about your creative abilities will get out.’’

Recommendations from career adviser Patricia Hunt Sinacole:
■ Practice, prepare, and rehearse your qualifications and experience.
■ Have a clear response when faced with the “overqualified’’ comment, laying out salary expectations, commitment to role, and willingness to work.
■ Rework resume to traditional format, outlining job descriptions instead of listing projects. Include a list of technical proficiencies.
■ Make resume easy to skim and use a font that is legible both in print and on screen.
■ Explore industry specific professional meetings on Meetup.com and other social media sites.
■ Use Twitter to find instantly updated information about a fast-moving industry.
■ Track down freelance opportunities on websites targeted toward temporary workers and independent contractors.