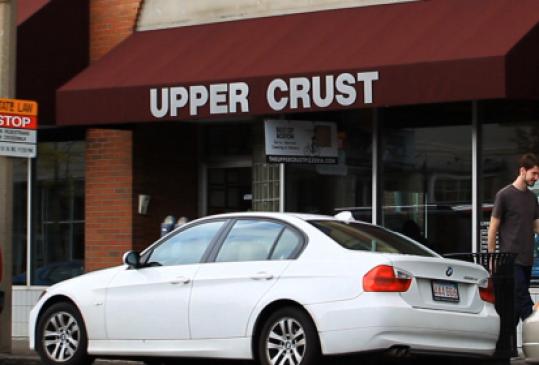 The Upper Crust location in Brookline is one of 17 stores. (Dina Rudick/Globe Staff)
By Jenn Abelson Globe Staff / December 10, 2010

The Upper Crust pizza chain is coming under scrutiny by the Massachusetts attorney general’s office for potential violations of the state’s minimum-wage and other workplace laws, according to an official briefed on the matter.

This inquiry comes days after the Globe reported allegations from former Upper Crust employees that the Boston pizzeria exploited Brazilian immigrant workers as it rapidly expanded over the past decade. Former employees have accused Upper Crust and owner Jordan Tobins of taking back thousands of dollars in overtime payments that were ordered by the Department of Labor and failing to pay minimum wage.

“We have nothing to hide. We welcome any investigation,’’ said George Regan, a spokesman for Upper Crust.

“The violations in this case are particularly egregious, and we are pleased to see another agency looking into this as well,’’ said Shannon Liss-Riordan, one of the lawyers representing former workers who filed a lawsuit in July against Upper Crust.

The official briefed on the matter requested anonymity because the inquiry is not public.

Upper Crust, founded in 2001, is being examined by at least three state and federal agencies: the state attorney general’s office, the Department of Labor, and the Massachusetts Commission Against Discrimination.

Over the past 10 years, dozens of men have left the impoverished village of Marilac in southeastern Brazil and risked their safety in treacherous, illegal border crossings to make their way to Boston. They have come with dreams of making a better life by working at an Upper Crust shop and sending money to their families in Brazil to buy homes, build businesses, and pay bills.

Marilac provided a steady supply of cheap, dedicated labor for Upper Crust, and the arrangement worked — until ambition tore it apart.

As the chain swiftly expanded to 17 stores, the immigrants took on longer hours — often exceeding 80 hours per week — without overtime pay. The Brazilian employees, who usually worked as cooks and delivery drivers, said they were also denied raises and bonuses that had once made the jobs more palatable.

One former Brazilian worker, Marcia Almeida Sousa, thought the company went too far after she was involved in a car accident while delivering pizza. The crash left her with a cervical spine ligament injury and cervical sprain.

Four days after the October 2008 accident, Tobins asked Sousa to meet with him and his attorney. They wanted her to sign a paper stating she was not working when she was hurt, according to a copy of a complaint Sousa filed with the Massachusetts Commission Against Discrimination. She refused and filed a claim for workers’ compensation.

Upper Crust managers and employees began to harass her, and in March 2009, she was fired, the complaint alleged.

“They never asked me ‘Are you OK,’ ’’ Sousa wrote in an e-mail to the Globe. “They didn’t like that I had workers’ compensation.’’

Barbara Green, a spokeswoman for the Massachusetts Commission Against Discrimination, said, “This complaint is still being actively investigated.’’

Upper Crust “is vigorously defending itself against the allegations,’’ Regan said. Sousa received worker’s compensation, he said, but did not get unemployment benefits because she left of her own accord.

Sousa and other immigrant employees eventually took their complaints about working conditions to the US Department of Labor. It launched an investigation last year and ordered Upper Crust to pay nearly $350,000 to about 120 employees for uncompensated overtime.

But Upper Crust demanded the immigrants surrender the government-ordered checks or lose their jobs, according to interviews with nine former employees. Two former cooks, in a lawsuit filed in Suffolk Superior Court, have accused the Boston pizzeria of taking back thousands of dollars in overtime payments by slashing their wages.

One of the plaintiffs, Valdeir Pereira Pinto, started earning $455 for working 80 hours a week, according to copies of his paychecks and timecards submitted as part of the lawsuit. That is about $5.70 an hour, or $2.30 below minimum wage. Pinto said Upper Crust deducted more than $8,000 over several months — the full overtime payment he received — and then fired him.

Upper Crust has denied these allegations.

“This is not true,’’ Regan said. “Everyone who received an overtime check cashed it.’’

Tobins, in an e-mail this summer, said Pinto and a second plaintiff in the lawsuit, Cleverson Batista, were not entitled to overtime under the law because they were managers, not hourly workers. He described the men as “disgruntled ex-employees.’’

After Upper Crust began reducing wages last fall, Carla Pantuosco, who served as a manager at the shop on Commonwealth Avenue in Boston, said she received weekly complaints about paycheck issues from the Brazilian kitchen workers.

“Every week it would be this new problem. Everybody in the front of the house was paid. It was always the back of the house,’’ said Pantuosco, who left shortly after Pinto was fired. “The kitchen staff got frustrated. It wasn’t a good situation. I couldn’t stand it.’’

The Department of Labor has an “open, ongoing investigation’’ of the Upper Crust chain, but spokesman John M. Chavez would not disclose details.

Ross Feinstein, a spokesman for Immigration and Customs Enforcement, said the department “neither confirms nor denies the existence of an ongoing investigation’’ of Upper Crust.