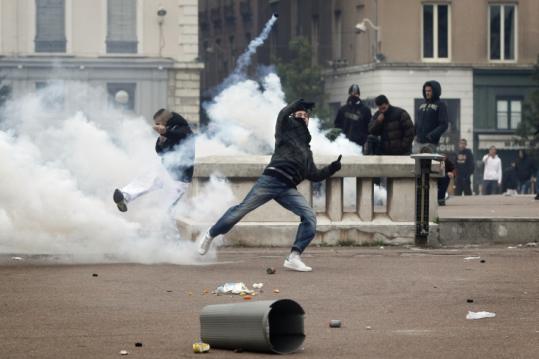 PARIS — Masked youths clashed with police and set fires in cities across France yesterday as protests against a proposed increase in the retirement age took an increasingly radical turn. Hundreds of flights were canceled, long lines formed at gas stations, and train service in many regions was cut in half.

President Nicolas Sarkozy pledged to crack down on “troublemakers’’ and guarantee public order, raising the possibility of more confrontations with young rioters after a week of disruptive but largely nonviolent demonstrations.

Sarkozy also vowed to ensure that fuel was available to everyone. Some 4,000 gas stations were out of gas yesterday afternoon, the environment minister said. The prime minister said oil companies agreed to pool gasoline stocks to try to get the dry gas stations filled again.

The protesters are trying to prevent parliament from approving a bill that would raise the retirement age from 60 to 62 to help prevent the pension system from going bankrupt. Many workers feel the change would erode France’s social benefits — which include long vacations and a state-subsidized health care system — in favor of “American-style capitalism.’’

Sarkozy’s government points out that 62 is among the lowest retirement ages in the world, the French are living much longer than they used to and the pension system is losing money. The workers say the government could find pension savings elsewhere, such as by raising contributions from employers.