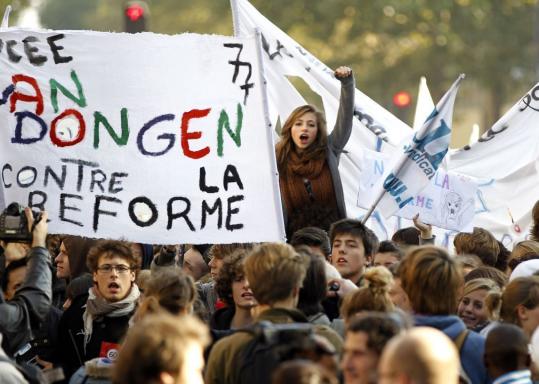 Several labor unions also announced another round of nationwide demonstrations scheduled for Tuesday — in addition to the planned street protests throughout the country expected tomorrow.

The students and labor unions see Sarkozy’s pension changes — raising the retirement age from 60 to 62 — as an attack on their social protections.

Thursday’s protests were mostly peaceful, but a 16-year-old was hospitalized in a Paris suburb after he was hit by a rubber projectile from a flash-ball gun fired by police. A police official said officers responded after students blockading a high school pelted them with projectiles.

Police in the Val-de-Marne region detained about 15 students for hurling projectiles at police and vandalizing property. Another 22 young people were detained in Lyon following clashes with police.

In Toulouse, police estimated that 7,000 people joined a protest march, though unions insisted that nearly three times as many took part.

Meanwhile, workers at oil giant Total’s six refineries in France kept protesting, and union leaders said “not one drop of oil’’ has been produced since Tuesday.

Ten of France’s 12 refineries are on strike. “A fuel shortage can be expected in the coming days,’’ a union spokesman said.

While Paris transit workers were mostly back on the job after strikes earlier this week, workers of the SNCF rail authority continued their walkout for a third day. About 20 percent of train employees were on strike yesterday, the SNCF said. Workers voted to extend the strike through today.

Sarkozy has stood firmly by his plan. His governing conservatives say it is the only way to save the failing pension system in a country with a huge budget deficit and sluggish economy. Even with the change, France’s retirement age would be among the lowest in the developed world.

Greece is in the midst of a tough austerity program that has cut public workers’ salaries and pensions. The plan has led to strikes and demonstrations.