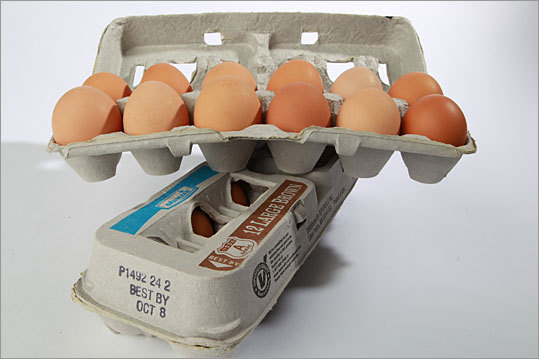 In the aftermath of the recent salmonella scare, some major supermarkets in New England said they don’t sell eggs produced by farms owned by Austin “Jack’’ DeCoster, the man at the center of the largest egg recall in US history.

But Globe reporters visiting about half a dozen stores over the past two weeks found egg cartons bearing stamps from three Maine farms that have multiple ties to the DeCoster empire.

The cartons don’t have DeCoster’s name on them. But an egg producer stamps its plant number on each carton. Shaw’s, Stop & Shop, Hannaford, and Market Basket, under their store brands, are selling row after row of egg cartons stamped with Plant 1492, Plant 1021A, or Plant 1021B, which are processed by Dorothy Egg Farms.

The complex on Plains Road in Turner, Maine, is where Dorothy Egg Farms, its sister company Mountain Hollow Farms, and Quality Egg of New England — the successor business to DeCoster Egg Farms— all have facilities.

The three producers are under scrutiny by US investigators looking into DeCoster and the recent recall. No salmonella cases have been reported in New England.

Market Basket sells eggs stamped with Plant 1203C and Plant 1103, which is operated by Quality Egg of New England. David K. McLean, operations manager at Market Basket, said he does not recall whether the company made any promise to sever ties with DeCoster.

Stop & Shop, Hannaford, and Market Basket also are stocking egg cartons stamped with Plant 1182. That facility in Leeds is run by Mountain Hollow Farms, which has been owned by Dorothy Egg Farms for more than five years.

The three Maine producers lease land and equipment, use the same hen and feed suppliers, are all named as debtors with DeCoster in financing statements, and list the same mailing address in Galt, Iowa with Wright County Egg, the DeCoster farm at the center of the recent recall.

Supermarkets maintained they do not sell eggs produced by DeCoster — and repeated that assertion when asked if they sold eggs from farms with links to the DeCoster operation. They stood by the quality and safety of the eggs they sell.

The eggs that come from the three Maine producers run the gamut — brown eggs, white eggs, vegetarian-fed, organic. You can trace the producers by plant number by visiting this US Department of Agriculture website, http://apps.ams.usda.gov/plantbook/Query_Pages/plantbook_query.asp.

Eggs sold locally have ties to Iowa farm at center of recall.
Your comment is subject to the rules of our Posting Policy
This comment may appear on your public profile. Public Profile FAQ