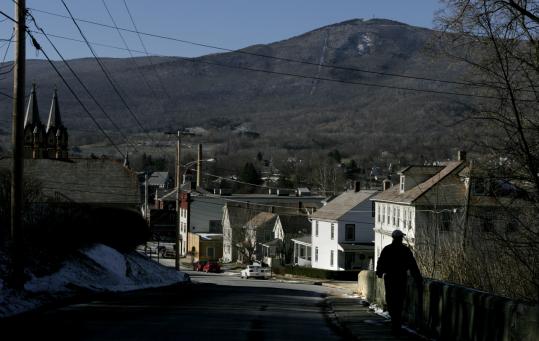 A view of Mount Greylock from Adams. The town is looking for a developer to help build a new resort, which would include a conference center. (Photo by Amy Toensing for The Boston Globe/ File 2006)
By Aubin Tyler Globe Correspondent / June 9, 2010

ADAMS — This tiny town in the heart of the Berkshires is having a go at something others have tried and failed to do since the 1950s: build a resort at the base of Mount Greylock, the state’s highest peak and first wilderness park.

The resort would be in an area called Greylock Glen, a 1,063-acre swath of farmland, pasture, and burbling brooks at the base of the mountain’s eastern flank. It would include a conference center and lodge, 140-site campground, and revamped trail system in the first phase, and possibly later an environmental education and Nordic ski center, and an outdoor performance amphitheater.

Last month Massachusetts environmental regulators gave Adams permission to proceed, a key milestone for a project that has been repeatedly opposed by environmentalists who feared previous iterations would damage a magnificent natural area.

Now, all Adams needs is $44 million. That’s a huge sum for a former industrial town with an annual budget of only around $13 million.

Rather than raising the money itself, Adams has begun to look for a developer to build the conference center, lodge, and campground. The developer would get the profits from the operations while Adams would net revenue from taxes levied on overnight stays. Under its agreement with the state, which owns the property and designated Adams as the developer, the town has until Dec. 31, 2011, to find a builder.

With the economy emerging from a recession, now would not seem a great time to find a builder willing to put so much money at risk. But some industry specialists believe regional tourism projects such as Greylock Glen may be more in favor than large-scale destination resorts.

Kristin M. Lamoureux, director of the International Institute of Tourism Studies at the George Washington University School of Business, said regional tourism “is doing pretty well’’ as vacationers are looking for outlets closer to home.

“The Berkshires have got a brand to them. They have name recognition,’’ Lamoureux said. “It sounds like it would be attractive to regional or nature-based domestic tourists.’’

Rachel Roginsky, owner of the Boston-based hospitality consulting firm Pinnacle Advisory Group, said that by leasing the land Adams is “cutting out a fairly significant portion’’ of costs for a developer. Yet most developers want to see a 20 percent return on their investment and banks need to see that they can get their debt covered.

“Banks right now are hesitant to lend for new construction,’’ Roginsky said. “Hospitality is down dramatically compared to three or four years ago. An environmentally friendly investment will probably get attention. But will (banks) lend?’’

This part of Western Massachusetts is already a substantial vacation destination, with an estimated 2.5 million overnight stays a year by visitors, according to the Berkshire Visitors Bureau. In 2008, the most recent year for which spending data is available, visitors spent an estimated $319 million in the region.

In addition to numerous parks, forests, and lakes, the Berkshires are noted for cultural attractions: Nearby is the Williams College Museum of Art and Clark Art Institute. Events at Tanglewood and festivals such as Jacob’s Pillow Dance Festival bring in droves.

The most meaningful recent development in Greylock Glen’s favor is the popular Massachusetts Museum of Contemporary Art, or MassMoca, in neighboring North Adams, which has brought both tourism money and cultural sensibilities to a corner of the Berkshires struggling with the loss of its industrial base.

“We used to manufacture paper and cloth, but the factories are all gone,’’ said Michael Ouellette, an Adams selectman and a retired General Electric engineer. “There’s no real attraction here other than the natural beauty.’’

A market study commissioned in 2004 by MassDevelopment, the state’s finance and development authority, favorably compared the Greylock eco-style resort with others that successfully combined environmental learning with meeting space and outdoor recreation: the nonprofit IslandWood, a $52 million outdoor learning center on Bainbridge Island near Seattle; and the for-profit Great Glen Trails Outdoor Center at the base of Mount Washington in New Hampshire, which has offered winter and summer recreation since 1994.

A tramway and ski area proposed by the state in the early 1950s was defeated in a legal challenge by a conservation group in the late 1960s. In 1973, ELCO Resort Development began construction on Greylock Glen Resort, which was to include a 350-room hotel and convention center, 900 homes and condos, an 18-hole golf course, and alpine ski area. The developer went broke in 1977. In 1980, MGM Grand expressed interest in a casino.

The state purchased the Glen in 1989, both to protect the area and to develop a tourism facility to benefit Adams, which lost 65 percent of its manufacturing jobs in the 1980s.

After a decade of development plans quashed by at least three governors, the state issued a request for proposals in 2004. Adams threw its hat in, said Donna Cesan, the town’s community development director, when “we were hearing that there weren’t many inquiries. So we took that step.’’

Unlike past efforts, Adams has the backing of conservationists. It has partnership agreements with the Massachusetts Audubon Society and Appalachian Mountain Club; development would be limited to just 48 of the Glen’s acres, with the rest permanently protected.

“We’ve geared our analysis toward ecotourism,’’ said Cesan. “We have a desire to make this as green as possible.’’

At nearly 3,500 feet high, Greylock is already popular among the outdoor cognoscenti. There are 45 miles of trails running through it, including a leg of the Appalachian, its summit features the newly reopened rustic stone and wood Bascom Lodge, built in the 1930s by the Civilian Conservation Corps, which also cut the Thunderbolt ski trail, which concludes its challenging 2-mile schuss in the Glen.

Environmentally, the site includes wetlands and habitat for several rare and threatened species, according to the environmental permit filing.

Cesan said that the Massachusetts College of Liberal Arts in North Adams has expressed interest in a field station and lab at the proposed environmental education center, and town officials have met with MassMoCA about creating an environmental art garden and sponsoring concerts at the outdoor venue.

But given Greylock Glen’s long, star-crossed history, some locals remain skeptical. One recent sunny morning town administrator Jonathan Butler and other Adams officials were out at the Greylock Glen site, where they bumped into an elderly local out for a walk.

After Butler described the new resort plan, the old-timer remarked: “Are you kidding me? They’ve been developing that since I was in high school.’’