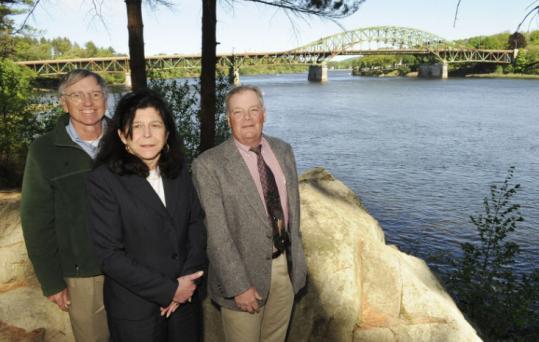 The largest highway project on the North Shore in decades won’t break ground until early 2013, but leaders in Newburyport, Amesbury, and Salisbury say now is the time to sit up and pay attention.

The nearly $400 million Whittier Bridge/I-95 Improvement Project will replace the structurally deficient and obsolete John Greenleaf Whittier Bridge that now carries the interstate over the Merrimack River with a wider span that can carry the increased traffic loads of decades to come.

Approximately four miles of I-95 will be widened and slightly rerouted, from just north of Exit 57 in Newburyport to Exit 60 in Salisbury. The project also includes rebuilding the heavily traveled I-495 interchange. Several bridges over the highway will be replaced or rebuilt, and ramps and grading will be improved to reduce accidents.

And, according to the state’s plan, all of that will be done in three years, without detouring the tens of thousands of vehicles that travel I-95 and I-495 every day onto other roads. The Whittier Bridge alone carries more than 70,000 vehicles a day on average.

“We are striving to maintain all users within the [existing] facility,’’ said Mike O’Dowd, project manager for the state Department of Transportation. “We don’t anticipate the need to detour traffic.’’

Officials of the three communities are concerned about the effect construction will have on the local economy, saying the state’s traffic predictions are overly rosy. A detour isn’t required for the project to create problems, they said.

“There’s still going to be an impact, no question about it,’’ said Newburyport Mayor Donna Holaday, adding that the state must take significant steps to counteract it. “The idea of them replacing an old water pipe and throwing in a couple of bike lanes over Ferry Road isn’t going to cut it. That’s not going to be sufficient mitigation from the standpoint of our city.’’

Representatives of the three towns are scheduled to meet with state Transportation Secretary Jeffrey B. Mullan as soon as possible to ask that the state work with a host-town advisory committee to resolve impact issues ahead of time, rather than simply put out a pile of completed studies for a 30-day public comment period. The towns will also ask the transportation department to pay for a part-time liaison to represent their interests as the project moves forward.

The towns are especially concerned because the project is being built under the state’s Accelerated Bridge Program. Under that program, the state is using a streamlined design/build process that will mean a “faster, quicker, more efficient’’ project, O’Dowd said, that can be finished by the time the program ends in 2016.

“They have spoken very clearly that the objective of the Accelerated Bridge Program is that they intend to make this happen in a much quicker fashion than normally would happen,’’ said Amesbury’s community and economic development director, Joseph Fahey. “Consequently, the communities need to make very, very certain that the issues that are going to affect them are going to be specifically addressed.’’

The state also seeks an environmental finding of no significant impact or FONSI, which allows an expedited review process.

“This is an incredibly complex project that will take multiple years, which will affect all three communities environmentally and economically, and I just think a FONSI would be highly inappropriate,’’ said Holaday.

No one has answered the question of what happens if the bridge is not completed by the end of the accelerated program.

While the state is considering various bridge designs, the preferred alternative is a box girder bridge — two flat spans crossing the river, one northbound and one southbound, each with four travel lanes plus breakdown lanes on both sides. The Whittier bridge has three lanes in each direction.

“Trepidation’’ on the part of local officials is expected, understandable with “a project of this magnitude,’’ O’Dowd said. He promised a “safe, accountable, efficient’’ project that will create a number of jobs but declined to estimate a specific number, although he said it “could very well be hundreds.’’

Educating the public and communicating about project goals will be key to a smooth construction process, he said.

But local officials say the economic impact on the three communities during the project could be painful. It’s bad if drivers avoid the area altogether, shunning local businesses and attractions. But it’s also a problem if local roads become clogged with commuters and truckers avoiding construction-zone delays.

“We could really be hurt financially as a city,’’ said Holaday.

The towns have some experience from the months-long repairs to the Chain Bridge, on a secondary road crossing just downstream from the Whittier. The other half of the river crossing there, the Hines Bridge, is soon to close for a major reconstruction project, and local officials are adamant that the Whittier project not start until that work is complete.

The nightmare scenario for all concerned happened last fall when a gasoline tanker rolled over on I-95 just south of the Whittier Bridge, which closed both sides of the highway for most of a day and gridlocked area traffic, especially along Route 110 and Route 1. Tim Lamprey, president of the Harbor Garden Center on Route 1 in Salisbury, said he can’t quantify the impact on his business, but he’s eager to avoid a repeat of the jam outside.

“During the time the tanker rolled over, about the only customers we got were customers who wanted to know if they could use the bathroom,’’ Lamprey said. “We might as well have closed the doors, but it didn’t make any difference, because we couldn’t have gotten out and gone anywhere anyway.’’

He says attention to small matters like the timing of traffic lights in Salisbury Square can have a huge impact.

“I said to a guy from MassHighway that people are going to get off 95 when traffic starts to back up, and they’re going to come up Route 1,’’ Lamprey said. “He said that’s not likely to happen. And I said, everybody’s got these GPS systems now, and they just punch in ‘Get me around this,’ and it’s going to bring them up Route 1.’’

There are many other questions. The project will pass close to Salisbury’s major source of drinking water. “What if you had a spill like [the gasoline tanker] right next to our well field?’’ asked Salisbury Selectman Jerry Klima. “I’d like them to do some things to prevent that.’’

Rerouting I-95 will take it closer to some homes in the stretch just north of the river. Bridge pier designs must not only protect wildlife and fish but take into account navigation and river hydraulics — currents, channels, and tides.

A rail trail connection between Amesbury and Salisbury passes under the highway, and Newburyport officials want to establish a similar east-west connection under their end of the Whittier Bridge. Some advocate a bike-and-pedestrian crossing as part of the new bridge, but Mass DOT said such a plan is likely to be “impractical and imprudent’’ given the nature of the interstate highway.