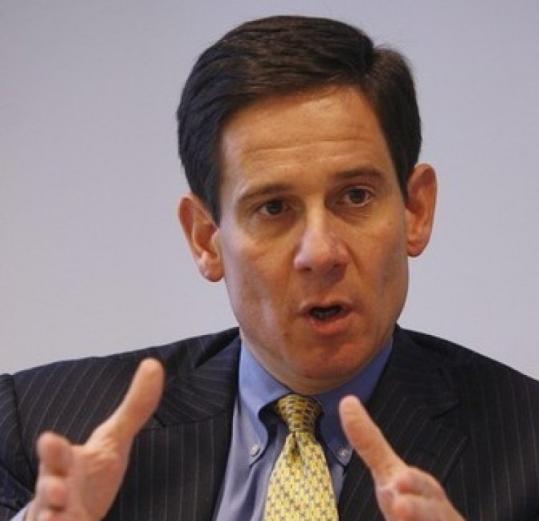 Michael Travaglini, who as head of the state’s pension fund is among the highest-paid government employees in Massachusetts, plans to quit next month, citing as a reason efforts by legislators to limit what he and his staff can earn.

In his six-year tenure as executive director, Massachusetts Pension Reserves Investment Management ran one of the top-rated public pension funds in the nation — until last year, when losses from the financial crisis made it one of the worst.

Prior to that downturn, the pension fund’s high performance earned Travaglini a $64,000 bonus in 2008, on top of his $322,000 salary. But now he cites the legislative backlash to that bonus system as a factor in his decision to leave June 11 and go to work for a Chicago investment firm.

“The issue of incentive compensation here is back on the front burner,’’ said Travaglini, who will formally announce his resignation June 1. “If you need the context for my decision, it’s an entirely personal one. I have a wife and three children, and I’m going to provide for them.’’

Under the bonus system, which Travaglini helped to create three years ago, he can make as much as 40 percent more if the pension fund exceeds certain investment benchmarks on a three-year basis. Bonuses for other pension fund employees range from 30 percent to 40 percent.

Travaglini said two legislative proposals would limit such bonuses, and thus make it harder to attract and retain talent to run the state’s $44 billion pension fund. One would limit the ability of state workers to earn more than the governor, whose annual salary is $143,000. Another would block bonuses for the years in which the fund lost money, regardless of how it performed against its benchmarks.

“Someone else can hang around for that, but it’s not going to be Mike Travaglini,’’ said Travaglini.

“Most people will say, ‘Good riddance. If you want to make more money, go do it in the private sector,’ and that’s what I’m going to do. But there’s a real threat to not being able to recruit and retain competent people here.’’

He added: “People can vote with their feet, and that’s what I’m doing.’’

Travaglini also bristled at the campaign ads aimed at Timothy Cahill, the state treasurer and gubernatorial candidate who also serves as chairman of the Pension Reserves Investment Management board. The ads, financed by the Republican Governors Association, say the state paid out performance bonuses when the pension fund lost billions in 2008.

The bonuses were paid in September 2008 and were based on the fund’s performance for the three-year period that ended June 30, 2008. The Massachusetts fund ranked among the top 5 percent of comparable funds for that three-year period, according to Wilshire Associates, which rates pension fund returns.

But the one-year return for fiscal 2008 was not so great. Massachusetts lost 1.81 percent that year, but still placed among the top 20 percent for comparable funds for the one-year period.

The Massachusetts pension fund has performed relatively well under Travaglini’s leadership, which started in 2004. He earned double-digit investment returns in each of his first three years.

But the fund lost 23.9 percent in the fiscal year that ended in June 2009, its worst performance ever. The fund had more invested in equities than other pension funds during a period when global stock markets plummeted because of the credit crisis and banking failures.

For that one-year performance alone, the Massachusetts fund ranked in the 99th percentile of Wilshire’s ratings.

Travaglini’s bonus plan for pension fund employees has been controversial from the start, when he initially advocated for an even richer arrangement. But it has had relatively little impact so far, with none being paid last year and none expected this year, Travaglini said.

The plan rewards his employees if the fund’s performance exceeds the returns of investment indexes that reflect the mix of the state’s pension assets. Employees could earn bonuses if the pension fund loses money in a given year, so long as its decline is less than the indexes. On the other hand, if the fund makes money, but not enough to match the indexes, employees do not get bonuses.

Travaglini said a bonus system based on relative performance, not on whether the fund earns an investment profit, is important to reward employees who add value rather than pursue excessively conservative strategies.

Steven Syre can be reached at syre@globe.com.