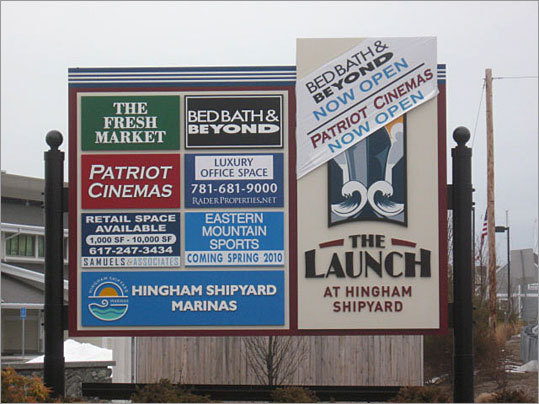 Hingham boasts million-dollar estates along its scenic shoreline, stately antique houses on Main Street, and boutique shops around the town square. The median household income is nearly $113,000 a year, well above the state and national average, while unemployment is well below the statewide rate.

Yet Massachusetts has long classified Hingham as “economically distressed.’’ The South Shore town is on the state’s list of economic target areas, allowing several companies, including a six-screen movie theater and a clothing store, to qualify for special tax breaks in exchange for a promise to open there.

And Hingham is not the only unlikely-seeming hard luck case. Over the last 16 years, the state has designated “economic target areas’’ in 209 of the state’s 351 cities and towns, making companies eligible for tax breaks if they expand there. Among them are such other comfortable suburbs as Hopkinton, Bedford, Lexington, and Westwood.

Though lawmakers originally created the Economic Development Incentive Program in 1993 to nudge businesses to invest in decaying cities and other areas scarred by poverty and unemployment, such as Fall River and Lawrence, the state has, over time, expanded the program to include almost any municipality that applies.

A 2008 study by MassInc., a nonprofit research group in Boston, found that affluent suburbs landed many of the biggest, most desirable economic development projects subsidized by the program, such as high-tech manufacturing plants and research parks. By contrast, struggling communities often used the program for discount stores, fast-food restaurants, and other businesses that generally create few high-paying jobs.

Consider two towns that have taken advantage of the subsidies, one upscale, the other struggling.

Boxborough, an affluent bedroom community northwest of Boston, used the program in 2000 and 2004 to support two major high-tech projects — a $675 million Cisco Systems Inc. office complex and a $157 million Interactive Data Corp. expansion — that promised to create or retain hundreds of high-paying jobs.

By contrast, New Bedford, a traditional fishing and manufacturing hub that has been plagued by high unemployment, approved 90 subsidized projects, but most were small, including a laundromat and a hair salon. Diman Coin Laundry promised to invest $100,000 and create two full-time jobs. Tropical Unisex Salon pledged to spend $200,000 and create one job.

Under state rules, the companies approved for the program were eligible to receive both a discount on their local property taxes and a state investment tax credit of 5 percent of the money they invested in the project. So the more money companies invested, the bigger the incentive. (Under legislation recently signed by Governor Deval Patrick, the state will be able to adjust the size of the tax credit — from zero to 10 percent of money invested — for new projects approved starting this month.)

In the case of Boxborough, companies promised to invest nearly $832 million, more than double the total figure for New Bedford firms, which would make them eligible for as much as $42 million in state tax credits, compared with $17 million for the companies in New Bedford.

Mayor Scott Lang of New Bedford said he does not begrudge the state helping Boxborough and other affluent communities land major companies like Cisco. “Any jobs brought to the state are good,’’ Lang said.

But Lang said the state should “supersize’’ the incentives for companies that expand into struggling old manufacturing hubs like New Bedford.

Greg Bialecki, the state’s secretary for housing and economic development, acknowledged the program has strayed from its initial goal.

“The original intention of the program was clear: These incentives were to be made available in economically challenged areas,’’ Bialecki said. “That doesn’t seem to be happening.’’

Bialecki, who has been working with Patrick and the Legislature to overhaul the program, said the problem is that state lawmakers created too many ways for communities to qualify for the subsidies.

The Legislature initially said towns needed to meet one of seven criteria, including higher-than-average unemployment and poverty, to create a target zone. But in 1997, four years after the original law was drafted, the Legislature added additional criteria, allowing even the wealthiest areas to qualify if they had at least 200 acres of development earmarked for technology companies, or an undervalued power plant, or a commercial vacancy rate of at least 20 percent. In addition, the state decided to allow towns to team up with poorer neighbors to create an economic target zone, even if they would not qualify on their own. Hingham, for instance, applied as part of a block of five communities.

To be sure, simply creating an economic target zone is not enough to qualify for the subsidies. Both the municipality and state board must also certify that the particular patch of land, building, or neighborhood where a company wants to expand is “blighted,’’ “decadent,’’ or “substandard.’’

However, state Inspector General Gregory Sullivan concluded in a 2004 report that officials “either ignore these legal definitions or stretch these definitions to the point where they are rendered virtually meaningless.’’

For instance, Sullivan pointed to a $7 million incentive awarded seven years ago to Manulife Financial, the Canadian parent of the John Hancock life insurance company, to move into a new office tower on South Boston’s waterfront. The neighborhood was designated as an “economic opportunity area’’ years ago, but Sullivan said the neighborhood was prime development land and did not need tax incentives to get new tenants.

And in 2008, the state approved $3.5 million in incentives to encourage investment banking giant JPMorgan Chase to move its operations to a gleaming (though largely empty) office tower in the neighborhood, despite objections from Boston activists who complained the area did not need special assistance.

“The seaport area is a thriving economic hub,’’ said Ned Flaherty, an urban planning activist from the South End, adding that developers have regularly built projects there without public subsidies.

In practice, the state appears willing to approve tax incentives for the development of almost any partially empty building or parcel, including empty swaths of land in suburban areas, often prized by big-box retailers and office developers. In one case that drew fire several years ago, a $1.2 million tax break was approved in 2001 to help Affiliated Managers Group, an investment firm, move its headquarters to an estate in Prides Crossing, a wealthy enclave in Beverly. That award drew notice because Sean Healey, the chief executive of Affiliated, is married to Kerry Healey, the former lieutenant governor.

State officials could not think of any examples of the Economic Assistance Coordinating Council — the board of state employees and gubernatorial appointees charged with overseeing the program — turning down an application for an economic target area or economic opportunity area.

Lambert, however, remains a skeptic, saying it is “still an open question’’ how much of the state support will go to decaying urban areas.

Yesterday, the Globe reported that Massachusetts has used the program to award hundreds of millions of dollars in state and local tax breaks to companies that pledged to create new jobs and make investments over the past 16 years. But the Globe found hundreds of the projects would have been built anyway, and many created few high-paying jobs or delivered fewer jobs than promised.

The Patrick administration acknowledged shortcomings in the program, but said it inherited the issues and has taken significant steps to address them, including implementing better tracking and ending tax breaks earlier for companies that fell short of their promises. More importantly, officials said the legislation Patrick recently signed will allow them to recoup tax incentives for future economic development projects that fall short, will give them more flexibility to steer aid to the projects likely to create the most jobs, and will require future projects to generate substantial out-of-state sales, effectively blocking most restaurants, retailers, and local service businesses, like laundromats, from participating.

“We have fixed some of the most glaring issues,’’ Bialecki said yesterday.

Hingham was originally designated as an economic target area in 1994 as part of a block of five South Shore towns that were coping with the loss of thousands of jobs from the shutdown of the Fore River Shipyard in Quincy in 1985.

The town first used the tax incentive in 2001, when it teamed up with Rockland to offer a five-year tax break to Serono Labs, now called EMD Serono, a biotechnology company that planned to create 142 jobs on property that straddles the two towns. A year later, Hingham offered a five-year tax incentive to ADP Investor Communications Services, now called Broadridge Financial Solutions, to create 26 new jobs in a South Hingham office park.

And in 2004, Hingham approved a tax break for the owners of the former Hingham Shipyard, where developers are building a shopping district and luxury homes.

The initial tax break for the shipyard covered only a sliver of the project: two new buildings in the marina. But Hingham designated the entire property as an “economic opportunity area’’ to help developers attract other businesses with the promise that they could apply for tax breaks of their own.

In December, the state approved provisional tax breaks for seven more businesses in the shipyard: a movie theater (Patriot Cinemas), two retail chains (Old Navy and Bed, Bath & Beyond), a Supercuts hair salon, two casual restaurants (Pizzapalooza and Panera), and a high-end grocery store (Fresh Market), though all had already committed to moving into the complex. Two of the businesses, the movie theater and Bed, Bath & Beyond, opened in July, five months before they received the tax incentives. And Old Navy is simply relocating an existing store in North Hingham to the waterfront.

To help the companies obtain the state tax credits, Hingham was required to chip in a property tax break of its own. But it worked out an agreement with the firms to reimburse the town, so the deal will not cost Hingham a cent.

A Hingham selectman, Bruce Rabuffo, said the program was instrumental in jump-starting construction at the shipyard, which was dominated by empty warehouses for decades. And though Rabuffo acknowledges that Hingham is relatively affluent, he said the project will benefit the entire South Shore by creating jobs available to residents in neighboring cities.

“If we are successful,’’ Rabuffo said, “it helps everyone.’’

On a recent weekend afternoon, the shipyard still felt empty, because most of the planned stores have yet to open. But most of the aging buildings have been replaced by shiny new residential towers, offices, and an outdoor retail plaza.

Residents had mixed reaction to the decision to subsidize the businesses.

Muriel Long, an artist who was shopping at Bed Bath & Beyond, said she thought it made sense to encourage companies to open in Hingham.

“It’s bringing jobs and I think that is a good thing,’’ said Long, 59, who lives in neighboring Hull. “There should be tax benefits to anyone trying to stimulate the economy.’’

But two friends, who came to the shipyard theater for a movie, said they were shocked to learn that Hingham was considered an economic target area.

One of them, Gerri Daigle, a 58-year-old hairdresser from Braintree, said she thought the money could be better used elsewhere.

“I don’t quite understand why Hingham is classified as an economic target area,’’ Daigle said, adding that her Weymouth hair salon has not received any tax breaks. “Hingham is one of the richer towns in the state.’’